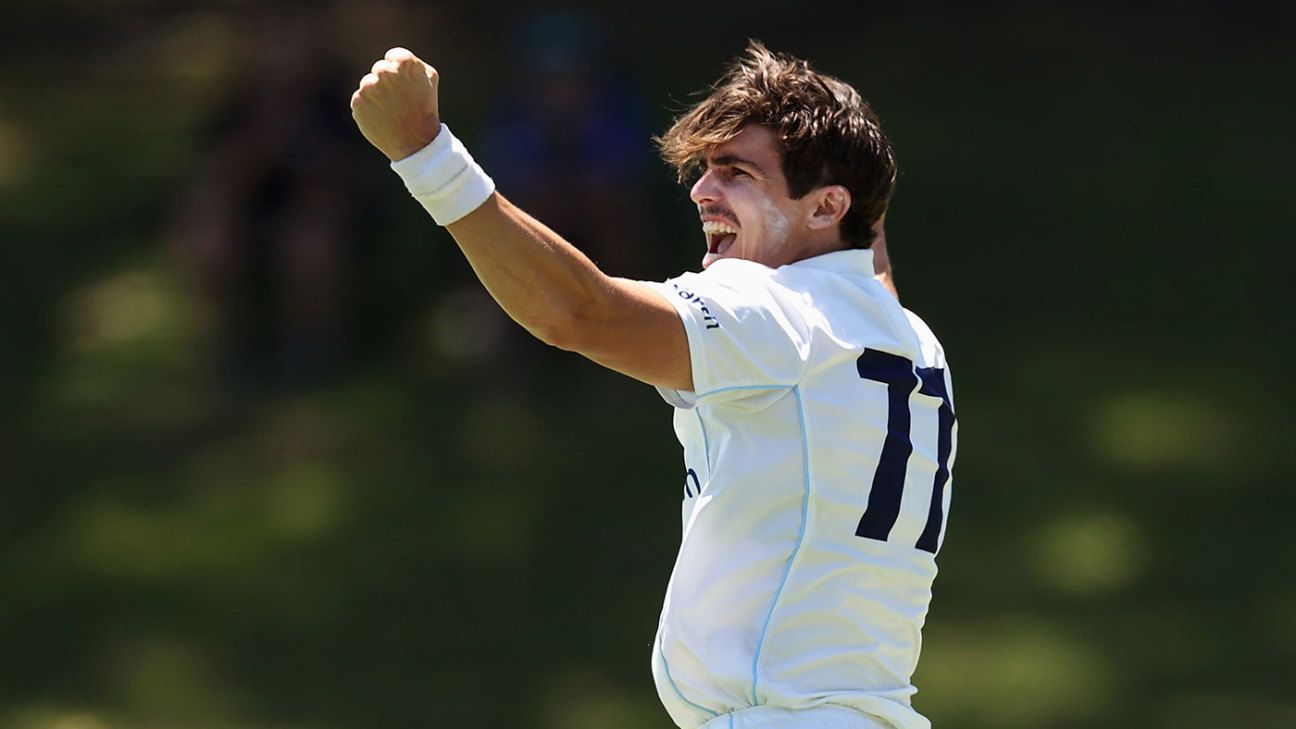 Sean Abbott is eyeing the chance to prove his red-ball game is up to Test standard in a long-awaited stretch of Sheffield Shield as the silver lining to missing Australia’s T20 World Cup squad.
Abbott will play his first red-ball game in close to a year on Tuesday, when NSW take on Queensland at Drummoyne.
In many ways, Abbott has become the forgotten man of Australian red-ball cricket. A year ago he was being talked about as an option for an Ashes debut if one of Australia’s quicks went down or was rested. Then life, Covid bubbles and injuries got in the way.
He pulled out of the Australia A squad early last summer ahead of the birth of daughter Ella. And when Pat Cummins became a Covid-19 close contact and Josh Hazlewood was injured at the Gabba, Michael Neser and Jhye Richardson got the chance.
Related
A week later, on Boxing Day, Scott Boland was handed his debut and starred, earning selection for the ensuing Test tour of Pakistan. Meanwhile, Abbott has not played a red-ball game since.
He was injured after last summer’s Big Bash, then missed the end of the Shield season while with the white-ball squad in Pakistan. He broke his finger before the first T20 in Sri Lanka, played two top-end ODIs against New Zealand and a T20 in India before sitting on the sideline against England.
“I definitely wouldn’t say I am frustrated. I’m right where I want to be,” Abbott told AAP.  “Although you are running drinks, it’s only because our Aussie side is so strong and the bowlers do well to play all three formats.
“But this year I have got my cricket all going in the right direction and the players I am with are almost the best coaches.  My white-ball has always been there, but I have got my red-ball going right. So all of a sudden I am either on stand-by or getting called up.”
This week should mark the first of five straight games for Abbott before the BBL, with the only possible interruption a call-up to Australia’s Test squad. In his two Shield games last summer, Abbott took 11 wickets at 20.72.  In the season before it was 21 at 29.14, while also scoring a maiden century and averaging 63.33 with the bat.
“I’ve made no secret that playing Test cricket is the dream, and I have to play Shield to do that,” Abbott said. “If the opportunity comes up, I know 100 percent I am ready to go.
“Even though I have only been in white-ball squads for the past two years, you are still working on things. Unless you’re doing structured bowling, your line-and-lengths and the way you feel at the crease is still the same as you would be aiming for in a four-day game.”
Tags: Australia, New South Wales, Sean Abbott, Sheffield Shield