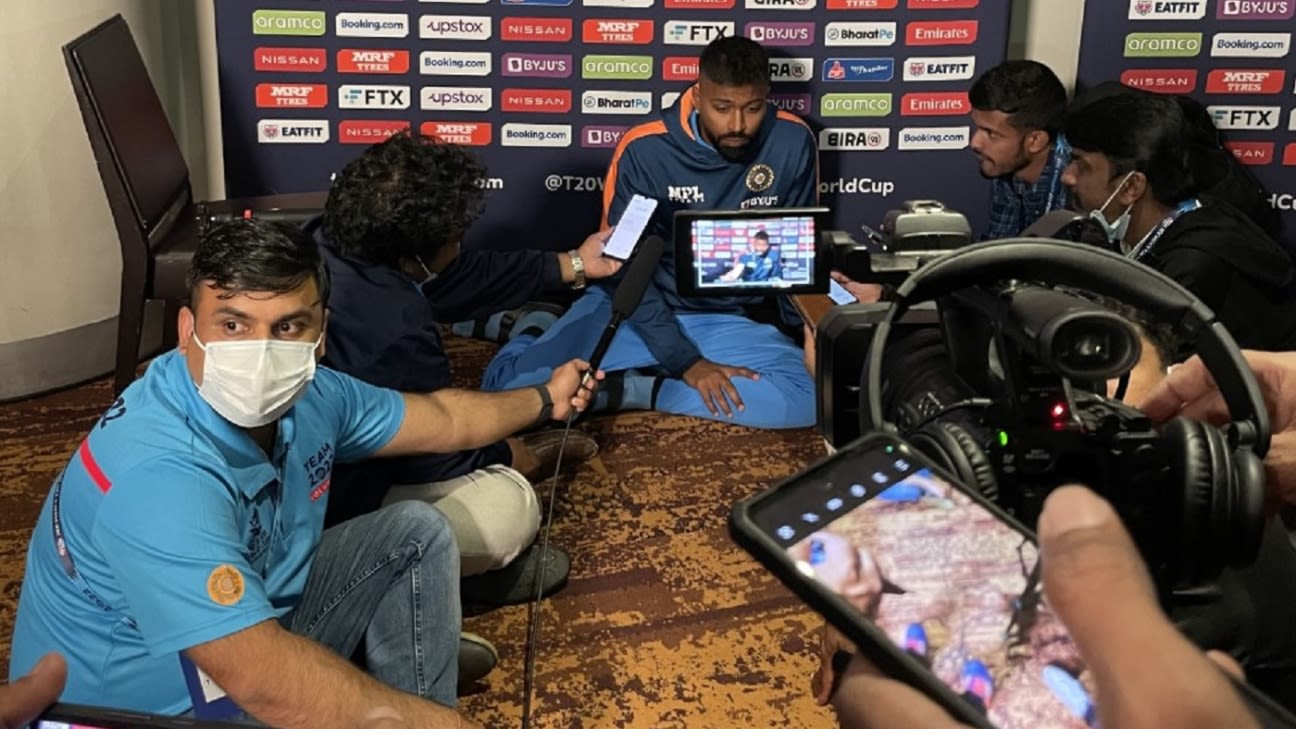 This bears an explanation of what an ICC mixed media zone is. After the official press conference, teams make available two players each who split to alternatively speak to written media and visual media for about three minutes or so. After they are done, they switch to the other media. Not much comes out of it because of such little time and so many reporters, but it is a more relaxed sitting.
While a couple of us spoke to Arshdeep Singh, we saw Hardik Pandya had set up a darbar with the visual media. He sat down on the floor with all the reporters doing the same. He was laughing, joking and ignoring the Indian team’s media officer’s directive to end the interaction.
It was to be expected after the kind of match India had won against Pakistan, but he said something in the written media interaction that pricked up my ear. Amid what sounded like self-help mumbo jumbo – and I am not denying he doesn’t believe it in or it doesn’t help – he said he had got rid of fear of failure.
I was like, “Really? What if you had lost today?”
“I said it,” Hardik said. “Even with three balls left, I told the boys, ‘Even if we lose the game, it’s okay.’ I said I am proud the way we have fought in the game. We have been a team that has worked very hard individually, together, collectively. So even if we had lost the game, I would have still had a smile on my face and would have just said we gave it everything, and they were just good on that day.
“Somewhere down the line I have accepted the fact that this sport will give me ups and downs. The more ups I have the better, but even the downs I will cherish because failure teaches you a lot of things.”
Hardik Pandya speaks to reporters at the ICC mixed media zone after helping India pull off a stunning chase•Sidharth Monga/ESPNcricinfo
It says a lot about the state of mind the team is in if two of the batters can put all the eggs in their own baskets the way Virat Kohli and Hardik did and still be philosophical about the result. In the end it came down to two freak shots, as Kohli said, to keep India alive and then a no-ball, two wides and three byes off the wicket in the final over.
During the partnership, especially when the asking rate began to get out of hand, Kohli said Hardik kept repeating, “Believe. Believe.” Hardik was asked to elaborate.
“This quote is about believing in yourself and your ability,” Hardik said. “There are so many distractions: the opposition, the pressure, the fear of failure, everything. If we don’t believe in ourselves, I don’t think what we did would have been possible.
“For me it was very important that even if we are struggling, it’s okay. We have to believe that we are going to hit the next ball. That’s the only thing I was telling Virat: we are going to do it no matter how ugly we look. It’s okay. But we will do it, and I think that carried on. That’s the reason why we were able to build a partnership even when we were struggling. We don’t think this was a fluent innings, but it was very important for us to fight it out and get the result we were after.”
Tags: Hardik Pandya, ICC Men's T20 World Cup, India, Pakistan vs India