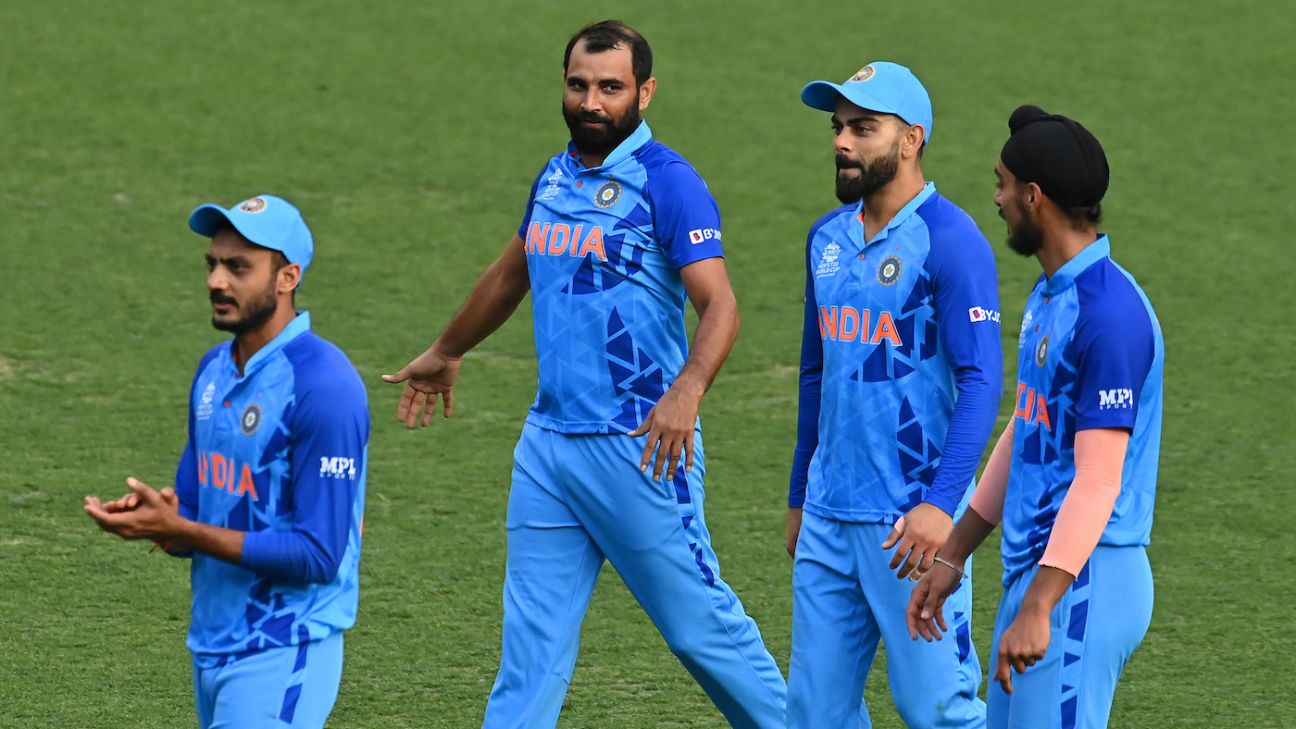 There was no sign of Mohammed Shami till the last over of the Indians’ warm-up game against Australia. “This was always the plan,” Rohit Sharma said, explaining that the plan was to throw a challenge to Shami, who was returning after a long layoff. But when Shami came on, he made things happen. The Australians, favourites to win with 11 to get off six, lost four off the last four balls, with Shami getting three, to lose by six runs.
“Honestly, he is coming back after a long time. So we just wanted to give him an over. This was always the plan from the beginning,” Rohit said on Star Sports. “He comes and bowls at the death. We know how lethal he can be with the new ball. We just wanted to give him a little bit of a challenge, coming and bowling that death over and we saw what it was.”
Related
In the Australians’ chase of the Indians’ 186 for 7, Aaron Finch led the way with a 54-ball 76. The first-wicket stand between Finch and Mitchell Marsh was worth 64 – inside the powerplay – and for the most part, it looked like the Australians would win. But Harshal Patel got Finch with a lower yorker, Virat Kohli pulled off a stunning run-out – and then a one-handed catch backtracking at long-on in the final over – and Shami aced the final over to give India victory, a heartening one after the defeat to a Western Australia XI the other day.
“There is definitely room for improvement,” Rohit said. “I am sure we are on it but I want to see more consistency in terms of where you want to pitch the ball. You know, when you play back home and when you play in Australian conditions, you have to change your tactics, change your lengths a little bit. Sometimes, keeping it simple and hitting the ball hard on the deck will be a good option.
“It is something we’ve been working on, speaking to the guys about it. But overall, it was a good game for us. Like I said, it was a good pitch. They had a decent partnership in the middle, which put pressure on us a little bit. But our last three-four overs were really good.”
Virat Kohli scored a direct hit and took a fantastic one-handed catch in the deep in the space of seven balls•ICC via Getty
The first half wasn’t too shabby either, as KL Rahul first and then Suryakumar Yadav hit quick half-centuries to put a good score on the board.
“I thought we batted well. Just towards the end, we could have added 10-15 runs more,” Rohit said. “That’s something that we have been talking about. We want the set batter to bat as long as possible and till the end, which Surya did to some extent. Yeah, overall, it was a great batting effort. It was a good pitch to play on, nice bounce, we could trust our shots and that’s exactly what some of the guys did.”
The large square boundaries at the Gabba was a new thing for at least some of the batters, too.
“You have to be smart when you plan your batting on grounds like these. Hitting boundaries and sixes, of course, sounds nice, but you cannot forget pushing the ball in the gap, running between the wickets really hard and trying to get eight-nine runs in an over,” Rohit said. “[It’s] also a quite safe plan to have and it’s something we have been talking about.
“When we played in Perth [against WA XI] as well, the practice game, one side of the boundary would be large and it was a great practice for us today.”
Tags: Australia vs India, ICC Men's T20 World Cup, India, Mohammed Shami, Rohit Sharma