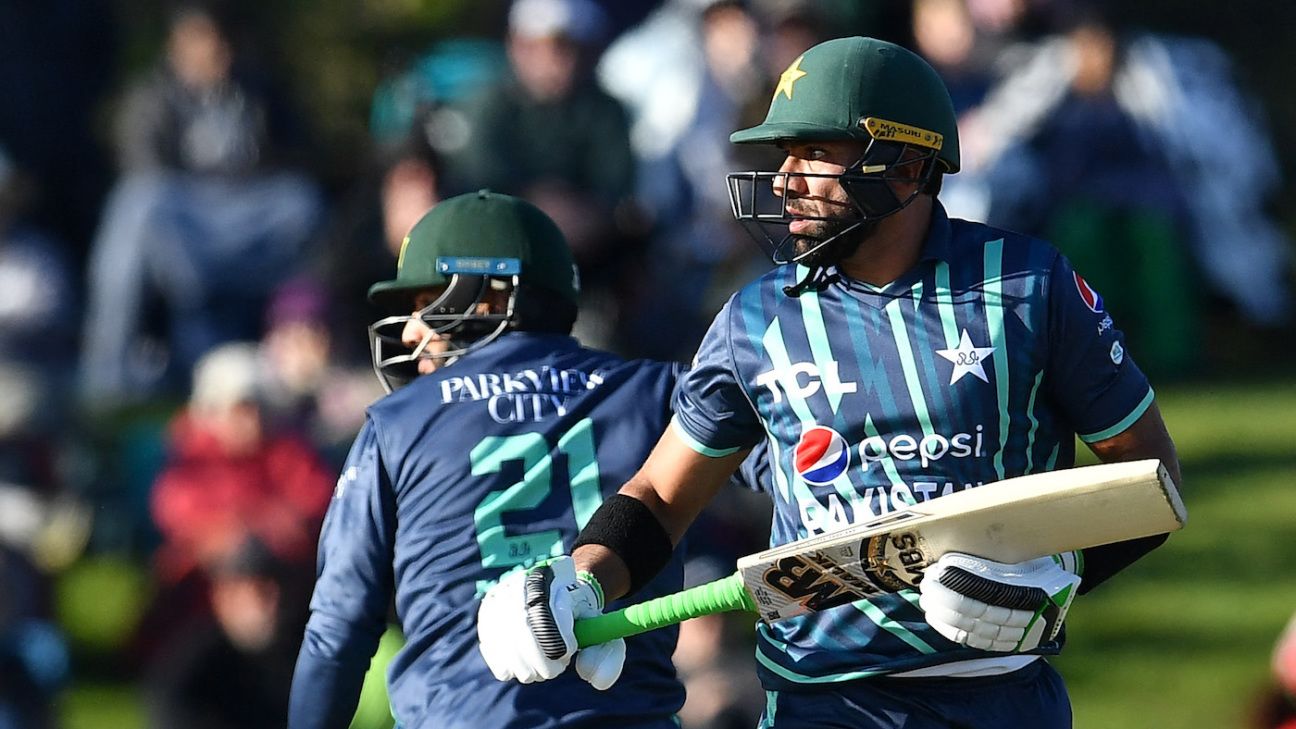 Two weeks ago, within hours of finishing a T20I series against England at home, Babar Azam and the other Pakistan players flew out to New Zealand for the last leg of their 2022 men’s T20 World Cup preparation. On Friday, within hours of winning the tri-series final in Christchurch, they were on the flight to Melbourne for the World Cup.
Related
It’s been all rush-rush, but familiarity with conditions, at least as far as surfaces go, should help. “It will make a difference, no doubt,” Babar said at a pre-World Cup press interaction. “The way we played the triangular series in New Zealand, it has helped a lot. The boys are confident, and we will try to carry the momentum into the World Cup.”
In Christchurch, they beat Bangladesh twice, and won one and lost one to New Zealand in the league phase, before winning the final. An upswing from the 4-3 series defeat to England.
Babar is particularly pleased that Pakistan’s middle-order batters, who have been under scrutiny, are starting to step up. On Friday, victory was sealed by Mohammad Nawaz, Haider Ali and Iftikhar Ahmed after the top three wobbled and Pakistan needed 67 in the last six overs.

“We have six days before the first game and two practice games, we will utilise the two practice games and make sure that Shaheen, especially the way he has come back, he is fully fit and fully dedicated to play”

Nawaz was particularly impressive, ending the series with knocks of 38* and 45* after a slightly lacklustre run with the bat against England at home. He has been backed because of his ability to play the role of a floater, something he did superbly in Pakistan’s Super 4s win over India at the Asia Cup in Dubai, when he made a 20-ball 42 to turn around a steep chase.
“The middle order has stepped up in the last two matches,” Babar agreed. “When you get such performances right before the World Cup, you gain a lot of confidence as a team, and I believe our middle order will perform. We are backing them. The way Ifti [Iftikhar] and especially Nawaz, and before that Shadab [Khan] played, the middle order is chipping in. And these are good signs for us before the World Cup.”
Babar was also effusive in his praise for Pakistan’s fast-bowling group, especially Haris Rauf, whose return to Australia is in many ways the competition of a circle. It is here that Rauf first made a name for himself in grade cricket before replacing his hero, Dale Steyn, at Melbourne Stars in the BBL in the 2019-20 season. He ended the tournament with 20 wickets, including a hat-trick, impressing with his 140kph-plus thunderbolts and slower deliveries alike.
Haris Rauf remains a key component in the Pakistan bowling unit•Getty Images
Haris hasn’t looked back since, emerging as one of the key men in Pakistan’s attack alongside Naseem Shah and Shaheen Shah Afridi.
“Our fast-bowling lot is very strong, and it will even be strengthened with Shaheen’s return [from a knee injury],” Babar said. “Our bench strength has been bowling well. We have bowled with different combinations over the last few matches, and they have performed.
“The way Haris has improved his bowling day-by-day in the death and with the new ball… it is an opportunity for the fast bowlers to show that we have skills and have different players for different combinations.”
Babar also expressed hope that Afridi would make a seamless comeback after a layoff since mid-July. Having first undergone on-tour rehabilitation in the Netherlands in August, he flew with the team to the Asia Cup in Dubai before flying to the UK to meet specialists. He’s now back with the group in Australia and looks set to play the tournament opener against India, on October 23 in Melbourne.
“We have six days before the first game and two practice games, we will utilise the two practice games and make sure that Shaheen, especially the way he has come back, he is fully fit and fully dedicated to play,” Babar said. “He gives his 100% effort every time, and looking forward to see him play.”
Tags: Babar Azam, Haris Rauf, ICC Men's T20 World Cup, Iftikhar Ahmed, Mohammad Nawaz, Naseem Shah, Pakistan, Pakistan vs India, Shaheen Shah Afridi