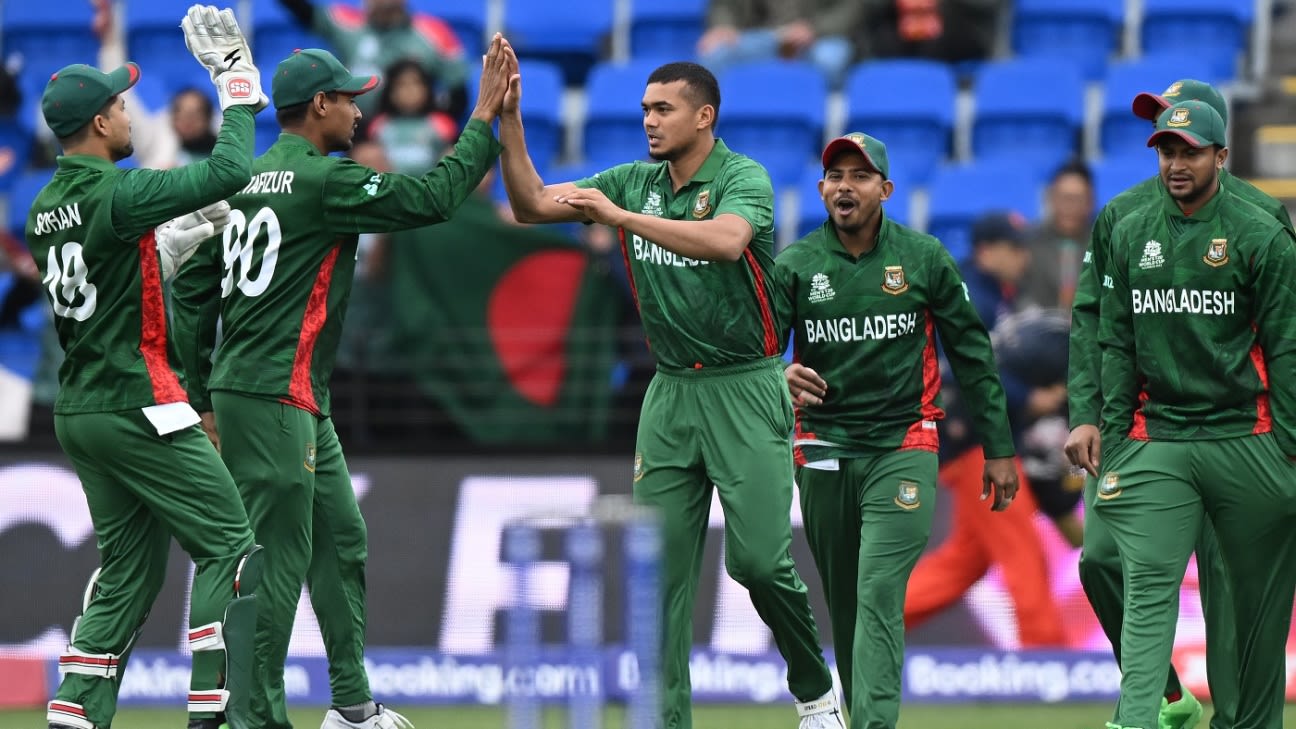 Bangladesh 144 for 8 (Afif 38, van Meekeren 2-21, de Leede 2-29) beat Netherlands 135 (Ackermann 62, Taskin 4-25, Mahmud 2-15) by 9 runs
Bangladesh’s quick bowlers came good as they pulled off a nine-run win over Netherlands, with Taskin Ahmed the star of the show. He picked up wickets with the first two balls of the Netherlands chase of Bangladesh’s 144, and finished with career-best figures of 4 for 25. Hasan Mahmud, too, was impressive with his change-ups as he returned 2 for 15, while Bangladesh’s fielding also looked the part, which is not always the case. The win was Bangladesh’s first at the Super 12 stage of any men’s T20 World Cup.
Only Colin Ackermann stood out with the bat for Netherlands, hitting his first T20I half-century, an effort that lifted them from 15 for 4 by the fourth over, and took them not too far from the target after they looked, at times, as though they wouldn’t cross 100.
Ackermann batted from the first over to the 17th, falling for 62 when he became Taskin’s final wicket. Paul van Meekeren’s six in the final over, bowled by Soumya Sarkar with 24 to get, gave Netherlands some hope, but it was always a bridge too far.
It might not have been so if the batters had added to the work of the bowlers, who gave away runs at the top but sent Bangladesh from 43 for no loss to 76 for 5 between the sixth and 11th overs, and kept them down to a reasonable total.
Two in two: Taskin Ahmed picked up wickets off the first two balls of Netherlands’ chase•ICC/Getty Images
The Bangladesh slide
Bangladesh got an excellent opening stand, but the collapse, inevitably, was just around the corner.
Soumya and Najmul Hossain Shanto took them to 43 in five overs before they fell in consecutive overs, both playing cross-batted shots that they couldn’t time well. Soumya went top-edging a pull off van Meekeren, and Shanto was caught at the midwicket boundary slog-sweeping Tim Pringle.
Then a quiet over, and again wickets off back-to-back overs, when Litton Das fell trying to pull Logan van Beek, and Shakib Al Hasan failed to clear Bas de Leede at the midwicket boundary off Shariz Ahmed. Not long after that, van Meekeren got his second when he played the old two-card trick on Yasir Ali. A quick short one pegged Yasir back, and then a fullish delivery, on a driving length, went through the batter’s defences.
Bangladesh had lost five wickets for 33 runs in the space of six overs.
Middle order lifts Bangladesh
Afif Hossain led Bangladesh’s recovery, most notably with three powerful shots off legspinner Shariz – sixes in the tenth and 15th overs, and a four in the latter, too. He was dropped by Pringle in the deep on the leg side too, off van Beek, when on 28, but Afif added 44 runs for the sixth wicket with Nurul Hasan.
Bangladesh’s deep batting line-up helped them here, because after Afif and Nurul were dismissed by de Leede in the 18th over, No. 8 Mosaddek Hossain breezed to an unbeaten 20 off 12 balls. He crashed de Leede through the off side before hammering a six over the covers in the final over, bowled by de Leede.
Colin Ackermann played a lone hand for Netherlands•ICC/Getty Images
Netherlands unravel at the top
Things happened rather quickly after the restart, as Taskin removed Vikramjit Singh and de Leede with the first two balls of the innings. Vikramjit edged to Yasir Ali at slip, and then de Leede nicked to Nurul behind the stumps off a wider delivery.
If that wasn’t bad enough for them, Netherlands’ poor running gave Bangladesh further inroads in the fourth over. First, Afif’s throw from the deep caught Max O’Dowd short at the non-striker’s end after a bit of miscommunication with Ackermann, and one ball later, Tom Cooper was caught short after an impressive slide-and-stop at the boundary followed by an excellent throw from Shanto.
Ackermann and Scott Edwards batted well for a little while, but Edwards fell to Shakib in the 12th over before Mahmud cleaned up Pringle just before a long rain break.
Ackermann plays a lone hand
Ackermann was, however, undeterred by either the rain or the rush of wickets. He struck the ball cleanly through the covers for most of his boundaries, and also dragged Taskin’s short delivery for a pulled four, and Soumya’s military medium was played delicately for a four through third. He also struck sixes over square leg and straight down the ground, as he showed off his range of shots in a difficult situation for his team.
He was dismissed to leave Netherlands at 101 for 9 in the 17 th over, but if Bangladesh felt it was done, not quite. Fred Klaassen and van Meekeren swung their bats around for 34 runs at the end to take them close even as Shakib juggled his options, though at no point would Bangladesh have felt unduly threatened.
Tags: Bangladesh, Bangladesh vs Netherlands, Colin Ackermann, ICC Men's T20 World Cup, Netherlands, Taskin Ahmed