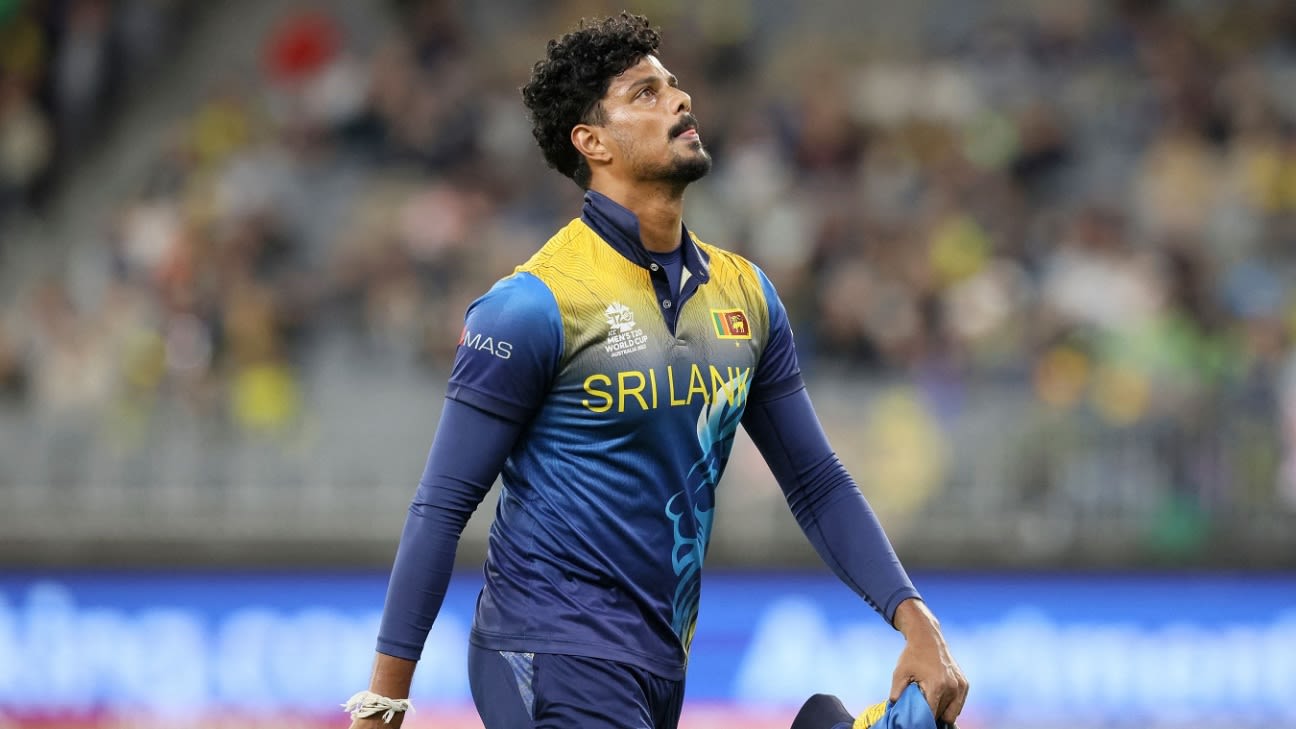 Sri Lanka coach Chris Silverwood remains optimistic his unfancied team can make a push at a semi-final berth despite a seven-wicket defeat to Australia at Optus Stadium, but their cursed injury run continued with quick Binura Fernando suffering a hamstring injury.
In foreign bouncy conditions, Sri Lanka sniffed a major upset when under pressure Australia slumped to 89 for 3 in the 13th over chasing 158.
But the shorthanded Sri Lanka attack, without Fernando who limped off the field unable to complete the opening over of the innings, succumbed to a furious assault from Marcus Stoinis, who smashed Australia’s fastest T20I half-century to finish with a match-winning 59 off 18 balls.
Related
“We knew Australia had to come hard at us because of their net run rate,” Silverwood said. “The way he [Stoinis] came back at us and struck the ball was exceptional.”
It leaves both teams on one victory apiece in Group 1 with Sri Lanka to face New Zealand at the SCG on Saturday in a must win contest.
“I truly believe that we can not only challenge this group, but come out victorious,” Silverwood said. “I think we’ve shown we have the capabilities and the skills within the group.
Five balls into the first over, Binura Fernando felt some discomfort and left the field•AFP/Getty Images
“We showed that in the Asia Cup and the confidence is growing within the group. The important thing from today is to regroup and get ready for the next game.”
Silverwood was particularly encouraged by Sri Lanka’s spirited batters, who were able to mostly thwart Australia’s star quicks on a fast Optus Stadium wicket, which mirrors the famous nearby WACA.
“I can’t fault the way the guys at the top of the order played,” he said. “The ball did move around early on. Life was difficult for us. We’re not used to that sort of bounce that we get here in Perth. The way they went about their business to set that platform…they did very well.”
Fernando, however, faces a race against time to play against New Zealand after clutching at his right hamstring just five deliveries into Australia’s innings to continue Sri Lanka’s wretched injury run with Danushka Gunathilaka, Dushmantha Chameera and Dilshan Madushanka already casualties.
“We’ll obviously assess him [Fernando] and the physios are working with him,” Silverwood said. “We’ll find out exactly the extent of the injury and we’ll have to make some decisions from there.”
Starting in Geelong for the first round, Sri Lanka have undergone arduous travel having played in Hobart against Ireland on Sunday before the long trek across the Nullarbor to Perth.
“It’s been hectic at times…it’s something you’ve just got to get used to,” Silverwood said. “You’ve got to try and plan the best you can with training and give people time to rest.”
Tags: Australia vs Sri Lanka, Binura Fernando, ICC Men's T20 World Cup, Sri Lanka