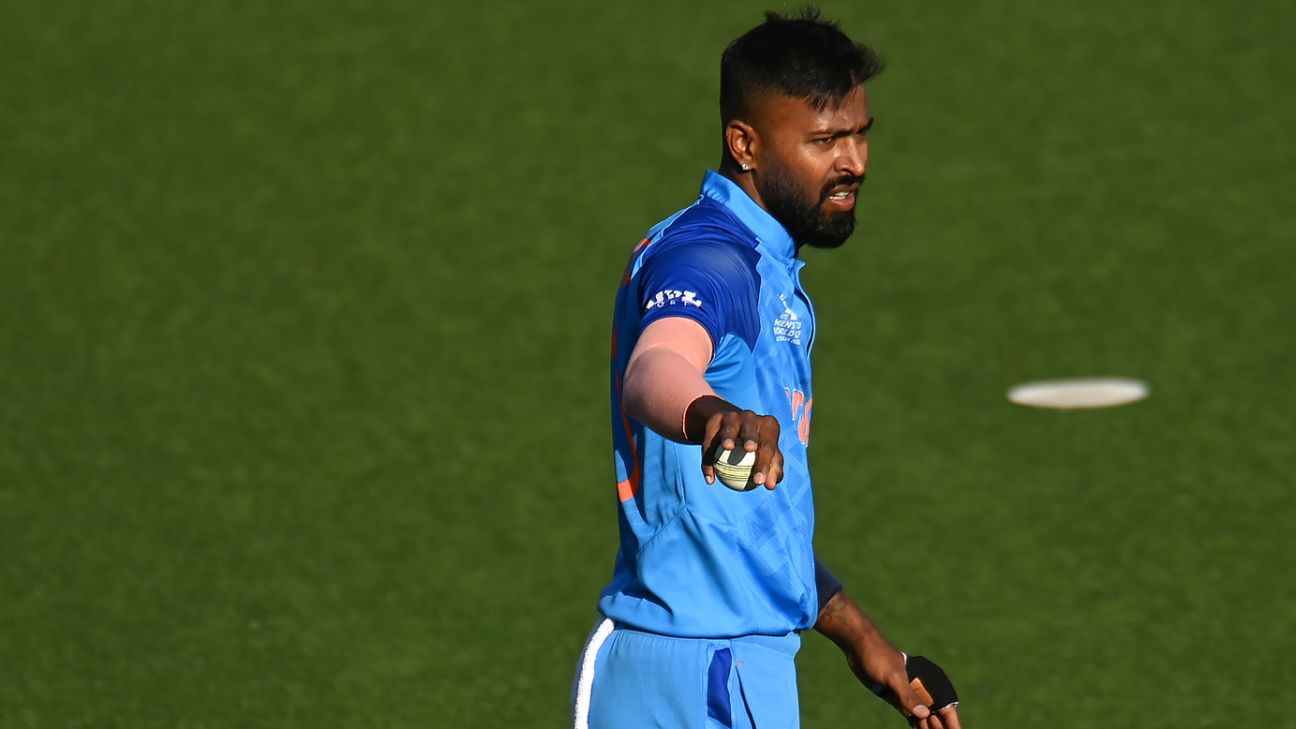 India allrounder Hardik Pandya is fine with bowlers running non-strikers out if they stray out of the crease. Speaking on The ICC Review podcast, ahead of the start of the T20 World Cup in Australia, Hardik also said he isn’t fussed about spirit-of-cricket debates around the mode of dismissal.
“We need to stop making a fuss about this. It’s a rule – [as] simple as that,” Hardik said. “To hell with the spirit of the game. If it’s there, [then] remove the rule – as simple as that. The ones who have a problem, good for them; it’s fine.
Related
“Personally, I have no problem. If I am walking out [of the crease], and someone runs me out – fair enough. It’s my mistake, not the bowler’s. He is taking the rules to his advantage – [as] simple as that. That’ll not make a big deal.”
The debate surrounding the spirit of cricket and fairness of such a dismissal was reignited last month when Deepti Sharma ran Charlie Dean out at Lord’s in the deciding ODI of the series between England and India. England were nine down and needed 17 off 39 balls before Deepti flicked the bails off to catch Dean short.
Earlier this March, the MCC had de-stigmatised running non-strikers out by shifting the move of a player being run out by the bowler while backing up from Law 41 (which deals with unfair play) to Law 38 (which deals with run-outs) in its recent update. More recently Australia quick Mitchell Starc suggested umpires use on-ground cameras to make “short-run” calls if the non-striker tries to gain an advantage. Starc spoke after informally warning Jos Buttler about the England batter leaving the non-striker’s end before he released the ball. Starc felt that docking the batting side a run in such circumstances would leave “no grey area”.
“Every time the batter leaves the crease before the front foot lands, dock them a run. There’s no grey area then,” he had said. “And in T20 cricket where runs are so handy at the back end and games can be decided by one, two, three runs all the time, if all of a sudden you get docked 20 runs because a batter’s leaving early, you’re going to stop doing it, aren’t you?”
Bowlers like R Ashwin have been vocal about promoting the use of the dismissal, having run Buttler out the same way in an IPL game in 2019. Running a non-striker out has historically been one of cricket’s most controversial and opinion-dividing topics. In the past, bowlers who practiced running non-strikers out – like West Indies’ Keemo Paul, for example, at an Under-19 World Cup game – have taken a step back from doing so after receiving backlash over their decision.
Tags: Hardik Pandya