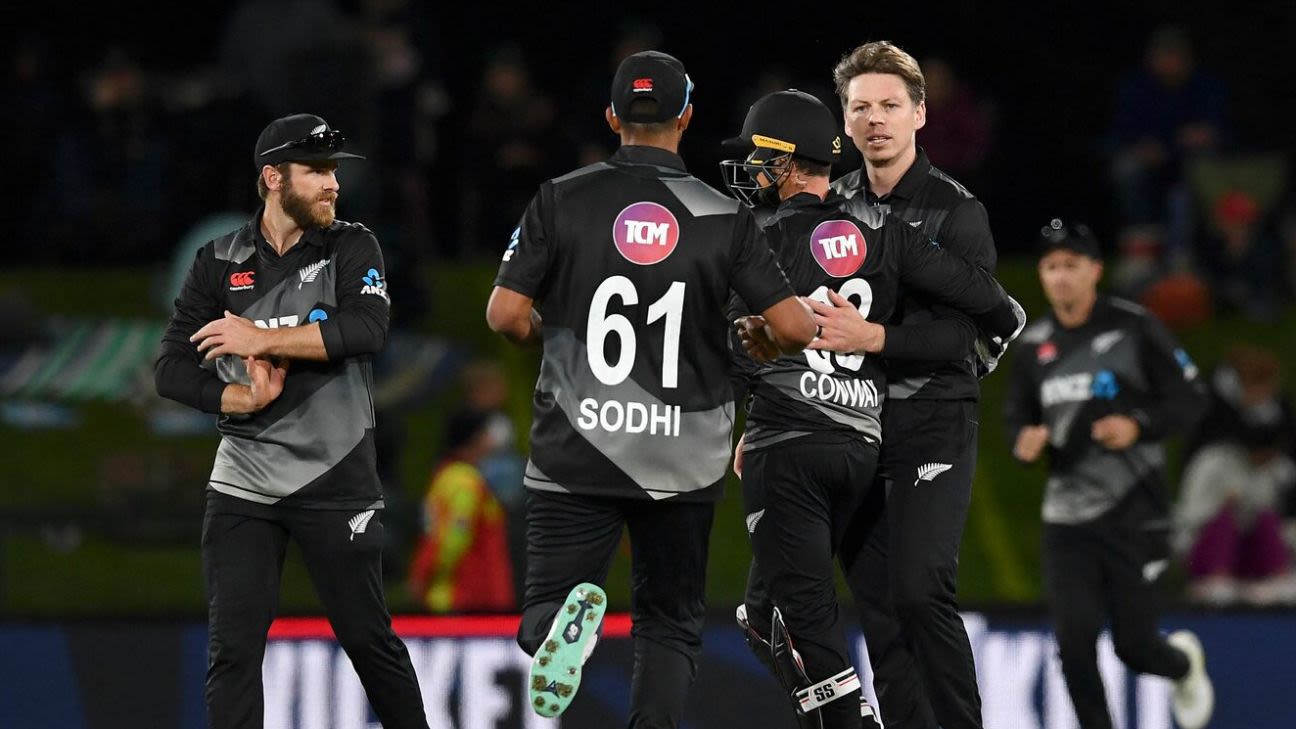 Kane Williamson is pleased with the form of allrounder Michael Bracewell and opening batter Finn Allen as New Zealand build up to the men’s T20 World Cup.
Bracewell, who is more of a batting allrounder for his domestic side Wellington, emerged as the joint-highest wicket-taker in the T20I tri-series in Christchurch, with eight strikes in five games at a scarcely believable economy rate of 4.94. Those returns fetched him the Player-of-the-Series award, though New Zealand lost the final to Pakistan on Friday.
Related
Allen, who was picked ahead of Martin Guptill, showed his explosive power at the top, striking at just over 145 across five games. Both players have now made strong cases to be in New Zealand’s starting XI for the T20 World Cup.
“Both performed beautifully well and [they] played really valuable roles within the side,” Williamson said at the post-match press conference. “[They play] complementary roles too – Finn at the top is super aggressive and hits the ball really, really hard and looks to take it on, which has been great. And it complements Dev [Devon Conway] really well.
“Michael – Man of the Series – incredible effort, especially to not win the series as a team. He showed his contributions throughout these five-six games. He was really disciplined with his lengths and made life quite difficult on these sorts of pitches as well.”
In the final, Bracewell bowled two tight overs in the powerplay in which he gave up just four runs and drew a top edge from Babar Azam to midwicket. Mitchell Santner is usually New Zealand’s go-to powerplay spinner, but Bracewell has shown that he can also bowl the tough overs against top batters. Bracewell also tied down Mohammad Rizwan, keeping him to a run-ball 6 against him.

“Tournament sport – it’s different and not playing similar teams day in and day out. It’s thinking on our toes and adjusting as a side quickly with different venues and different oppositions”
Kane Williamson

“It [bowling in the powerplay] is something that I’ve practiced a lot now, particularly in the nets and had a chance to go out in the middle and bowl a few times in the powerplay,” Bracewell told Spark Sport. “It’s something that I am getting more and more comfortable with. Obviously, it’s pretty daunting bowling to Mohammad Rizwan and Babar Azam. But it’s a challenge that I’m really enjoying.”
In last season’s Super Smash, Bracewell took only six wickets in 25 overs at an economy rate of 6.84. Having done well for New Zealand – both at home and away – Bracewell feels he is a more rounded offspinner now than he was last summer.
“I feel very fortunate for the opportunities that I’ve got. I’m just trying to learn as much as I can and soak up as much knowledge from the rest of the spin bowlers in our group,” he said. “Being able to play in different conditions all around the world is an absolute privilege. So, I’m really enjoying it and I feel I have a few more skills than I did eight months ago.”
With New Zealand carefully managing their injury-prone quicks Lockie Ferguson and Adam Milne, and Santner missing the early exchanges of the tri-series, the team management has had to juggle between finding their balance for the tri-series and preparing for the World Cup.
Finn Allen “is super aggressive and hits the ball really, really hard,” Kane Williamson noted•Getty Images
“It’s not really how we were looking at this [tri-series]. We were looking at this tournament in isolation a little bit,” Williamson said. “Having said that clearly, there’s a big tournament at the end of it, but trying to focus on what’s in front of us and play the cricket that’s in front of us. You can sometimes get carried away looking ahead and all these sorts of things; so, I thought that was good. There was some improvement throughout the series and some lessons.
“I think it’s valuable as a team to get this sort of exposure and competition quickly before a tournament like that. Tournament sport – it’s different and not playing similar teams day in and day out. It’s thinking on our toes and adjusting as a side quickly with different venues and different oppositions.”
New Zealand dropped at least eight catches in the tri-series, but Williamson wasn’t overly concerned by it. He drew confidence from New Zealand’s tidy effort in the field on Friday in isolation.
“That [dropped chances] was definitely touched on [in team discussions],” Williamson said. “Not just the catches; it can happen, although it was a little bit out of character. As a side, it’s something that we pride ourselves on, but that energy and intensity how we operate… we definitely saw an improvement today, which is important and hopefully we can continue that standard going ahead.”
New Zealand will open their T20 World Cup campaign against defending champions and hosts Australia at the SCG on October 22.
Tags: Finn Allen, Kane Williamson, Michael Bracewell, New Zealand, New Zealand T20I Tri-Series, New Zealand vs Pakistan