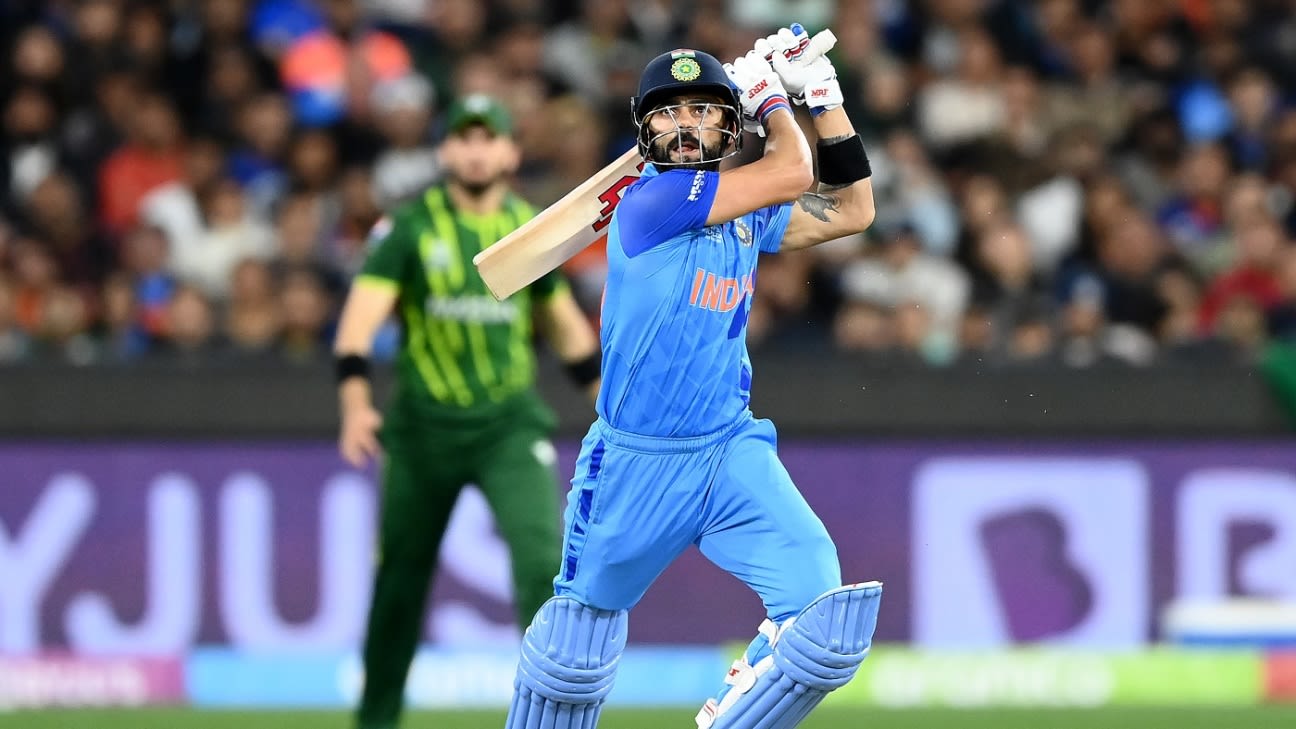 According to Anil Kumble and Stephen Fleming, the unbeaten 82 from Virat Kohli that sunk Pakistan in Melbourne had two standout characteristics. One, the ability to find boundaries at will in the second half and, two, the display of high fitness levels that are crucial to maximising run-scoring at a ground of MCG’s size.
At one stage, Kohli was 15 off 23 balls. He would smack 67 runs off his next 30 deliveries, 36 runs off his last 11. He finished on an unbeaten 82 of 53, which included six fours and four sixes, to help India put behind them the ghosts of 2021 when Pakistan defeated them at the T20 World Cup by ten wickets.
“What Virat has changed in the last two years, to what we are seeing him do now, is that change in his mind in terms of when to get those boundaries towards the second half of his game and that’s exactly what he did,” Kumble said on ESPNcricinfo’s T20 Time Out post-match analysis show. “He did that to Shadab [Khan], he did that to [Mohammad] Nawaz, he hit a six after Hardik [Pandya] had hit a six.
“He realised that that over [12th over from Nawaz that went for 20 runs] had to be a big over and that’s where the momentum shifted [for him].”
While Kohli called his own innings his “best in T20Is” after the match, Kumble called it a “perfect innings”. He also said that the presence of Hardik Pandya at the other end in their 113-run partnership, complemented Kohli’s playing style. Hardik finished with 40 off 37 balls, falling at the start of the 20th over.
“I thought it [the innings] was to perfection because Hardik was at the other end and Hardik took all the pressure in those middle overs, hitting key boundaries, especially to the spinners,” Kumble said. “That had been sort of his bane a couple of years ago. Especially in the middle overs, hitting boundaries, hitting sixes to spinners.”
Virat Kohli and Hardik Pandya stitched together a match-winning 113-run partnership•ICC via Getty Images
From the time Kohli and Hardik got together in the seventh over with the score reading 31 for 4, to the time R Ashwin hit the winning runs off the game’s final delivery, Kohli participated in running 39 singles, eight twos (including two runs run off a wide delivery) and one three (the free-hit that hit his stumps in the 20th over). Since the start of the 11th over, Kohli would play only four dots.
“The fitness in their running between the wickets was superb,” Fleming, the former New Zealand captain and current head coach at Chennai Super Kings, said. “He’s getting a little bit older, but to be able to maintain that intensity, he’s always had an intensity around him, but the running between the wickets was vital.
“Those are the little things you don’t see and they upped the ante with that and they snuck quite a few runs putting the Pakistan players under pressure. That intensity is what I like about Virat Kohli. It’s not just the the magical shots like the six that he had [against Rauf], it’s the stuff in between, and that’s gamesmanship, it’s experience and it’s greatness.”
Both experts also felt that Pakistan made errors with the ball at the back end when they were looking to close out the game. Kumble felt that Nawaz moved away from bowling his classical left-arm orthodox spin in the 20th over while Fleming felt that Haris Rauf – who conceded 12 off his last two deliveries in the penultimate over – missed a trick by not going for the time-tested death-overs plan of bowling the wide yorker.
“When you bowl those kind of overs, you sort of take the spin away from [the batter],” Kumble said. “Nawaz never looked to bowl the classical left-arm spin. He sort of bowled an arm ball – and then you know Hardik looked to hit through midwicket – but never ever looked to hit the deck with spin, which he did really well in the first three overs that he bowled. I guess that’s the beauty of the game. That’s the nerves telling on you and also some baggage of what had happened in the previous game against India when he bowled that last over in the Asia Cup.”
“I talk about the wide yorker because when you’re needing a boundary or sixes it’s very hard to hit the wide yorker if you can deliver it [right]. And I’ve seen him do it on big wide boundaries which can be protected,” Fleming said of Rauf. “It was a tactic that wasn’t used by either side which surprised me. Especially when you get in front of the game and Pakistan were in front of the game. They were bossing that game.
“India needed to hit sixes to get back into the game and win it. So you bowl the best ball and the method of being right [in these conditions] was back of a length, but still use the wide yorker… at no stage did they go wide. Haris Rauf, I thought he could have been a little bit more proactive with that and we might have seen a better result [for him]. But look, this is all in hindsight, he had brought a wonderful spell.”
Tags: Anil Kumble, ICC Men's T20 World Cup, India, Pakistan, Pakistan vs India, Stephen Fleming, Virat Kohli