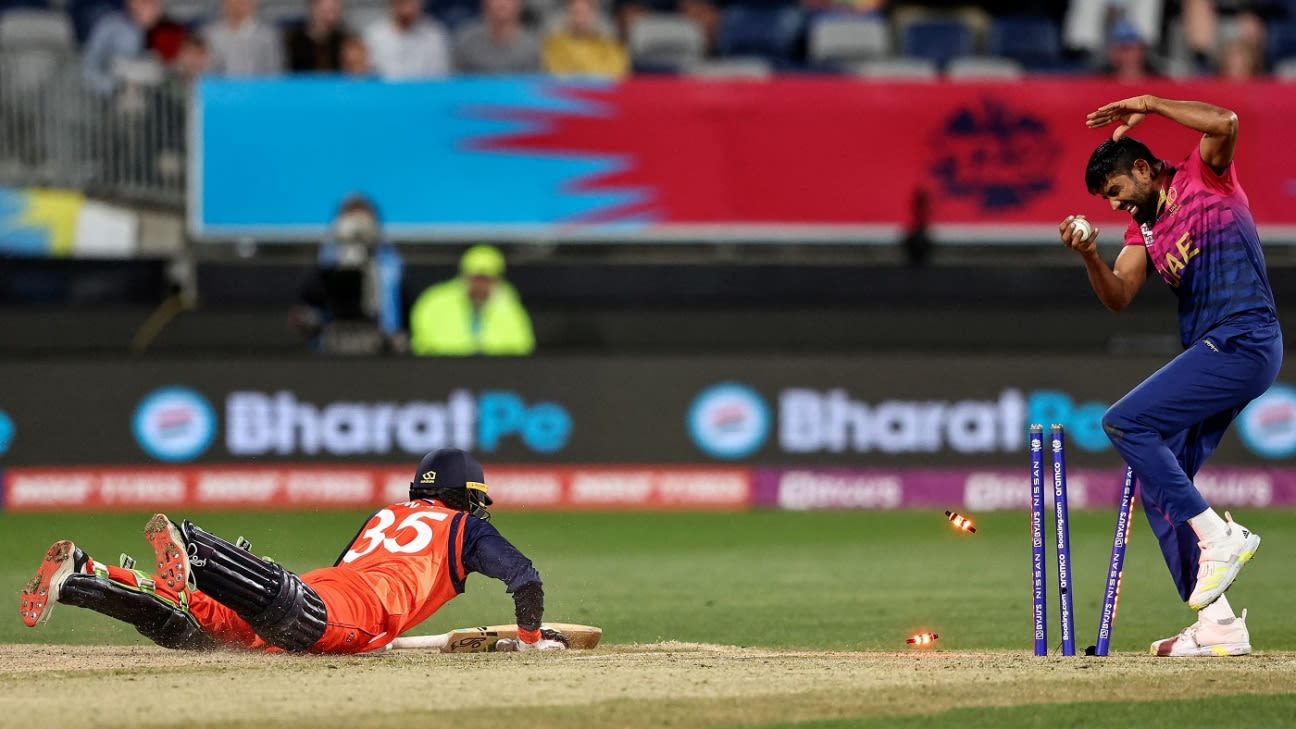 Netherlands 112 for 7 in 19.5 overs (O’Dowd 23, Siddique 3-24) beat UAE 111 for 8 (Waseem 41, de Leede 3-19) by three wickets
Netherlands scrapped their way to victory in a low-scoring game in Group A, dashing UAE’s hopes of defending a below-par target of 112 off the penultimate ball in Geelong. They were in trouble at 76 for 6 in the 14th over, before a vital lower-order stand between Scott Edwards, the Netherlands captain, and Tim Pringle got them within sight. Pringle fell in the 19th over but Edwards was there to hit the winning run.
After watching Namibia comfortably defend 163 against Sri Lanka earlier in the day, UAE captain CP Rizwan decided to try and put a score on the board – but his side was unable to get to grips with the surface or unusual ground dimensions, and went at below a run a ball throughout their innings. Opener Muhammed Waseem top-scored with 41 off 47, but only one batter (Kashif Daud) managed a strike rate over 100. Their tally of three fours – in addition to three sixes – across the innings was the lowest in a completed T20 World Cup innings.
Netherlands’ chase demonstrated what might have been achieved with a steeper asking rate. Max O’Dowd slammed a six and three fours in 23 off 18 – ultimately his side’s top score – to help get them ahead of their requirement, and although Junaid Siddique’s three-wicket haul kept UAE in contention, Edwards put his knowledge of Melbourne conditions to good use to steer his side to victory.
No Dowd about Netherlands’ approach
Although Siddique later threatened to turn the game for UAE, his loose opening over set the initial tone, with Vikramjit Singh twice carving boundaries through backward point. Vikramjit fell in the second over, slogging across the line at Basil Hameed, but his opening partner O’Dowd crunched his fourth ball into the stands towards deep midwicket. By the time he had belted two fours off Karthik Meiyappan in the fourth over, Netherlands had already equalled the UAE boundary count. But the dismissal of O’Dowd, bowled by a Siddique offcutter in the final over of the powerplay, enabled UAE to drag the scoring rate back, as Netherlands grafted their way to 76 for 4 after 13 overs and still seemingly on course.
Junaid Siddique produced a double-wicket over to rock the Netherlands chase•ICC via Getty Images
Siddique’s sideswipe
Any sense that Netherlands would motor on, perhaps looking to improve their net run rate ahead of clashes with Namibia and Sri Lanka, was shattered by Siddique’s third over. Tom Cooper, the Australian-raised middle-order batter who has previous experience of playing at Geelong’s Kardinia Park, was trapped lbw by the first delivery of the 14th over, and Siddique then produced a fabulous inswinging yorker to clean up Roelof van der Merwe second ball. Only one run came off the over, but it could have been even better for UAE had Rizwan not dropped a straightforward chance at cover after Pringle miscued his second delivery. Pringle and Edwards focused on scoring in ones and twos as they pieced together a crucial seventh-wicket stand that took Netherlands to the brink of victory.
UAE start slow
Having opted to bat, UAE seemed to place too much of a premium on building a solid base. After 3.4 overs, their score was 7 for 0 and the openers were being outscored by wides – at which point Waseem decided to get on with things and popped Logan van Beek over the leg side for back-to-back sixes. At the other end, Chirag Suri had laboured to 1 off 13 balls, and though he picked up a boundary and a scooped three in the final two powerplay overs, he gloved behind attempting to switch hit van der Merwe. Daud promptly launched his second ball over the rope at deep midwicket – although he would have been caught if Colin Ackermann was stood five yards further back – but UAE then went five overs without a boundary. Pringle, in particular, proved almost impossible to get away, bowling Daud through the gate and finishing with 1 for 13 from his four overs.
UAE finish slower
Waseem was dropped on 18, Vikramjit failing to pick up a sliced hack to deep third off van Beek, and struggled for timing on a grippy pitch. He was nevertheless holding the innings together before becoming the third wicket to fall in the 16th over, mistiming a Fred Klaassen cutter towards wide long-on where Pringle took the catch. That sparked a collapse of 6 for 19 from 24 balls: Zawar Farid was run out after getting sent back while looking for a second, before Bas de Leede claimed three in an over. UAE had been 57 for 1 at halfway, but managed just two boundaries in the second half of the innings and failed even to double their score, limping to 111 for 8 from 20 overs.
Young blood blooded
The game ended in defeat, but there were bright spots for UAE – not least the performance of spinning allrounder Aayan Afzal Khan, who at 16 years and 335 days became the youngest player ever to appear at a men’s T20 World Cup, breaking Mohammad Amir’s record from the 2009 tournament. Khan couldn’t prevent UAE’s late slide, falling for 5 off seven balls, but put in a tidy showing with the ball: his three overs for 15 featured just a single boundary and saw him claim a first World Cup wicket when Ackermann swung a slog-sweep to deep square leg.
Tags: ICC Men's T20 World Cup, Netherlands, U.A.E. vs Netherlands, United Arab Emirates