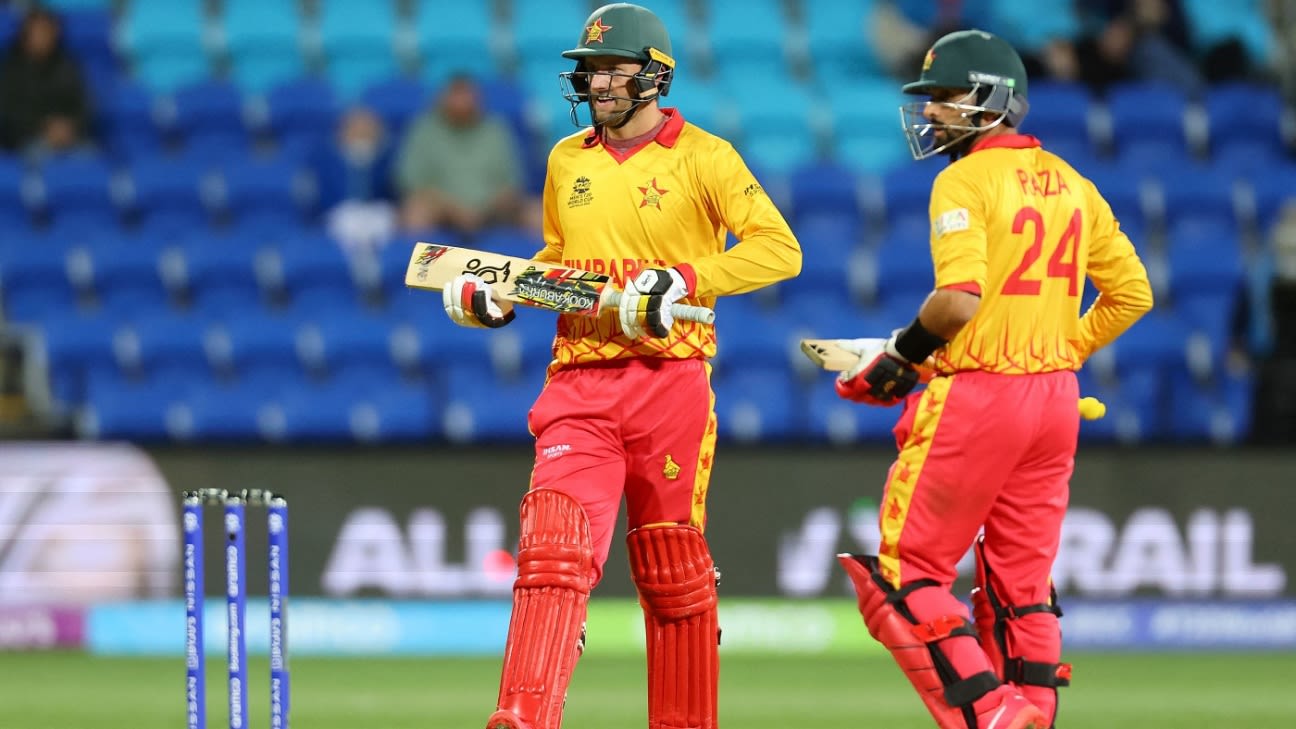 The Super 12s are only just beginning but Zimbabwe have already achieved their major goal of the T20 World Cup: to actually get to this point.
Coach Dave Houghton previously said he would not consider his team to have actually qualified for the tournament unless they advanced from the first round and secured a spot among the bigger teams. Now, they have done that and been given a licence to “do cause as much damage as we can,” which they are accepting with a mixture of trepidation and thrill. “Everybody’s really, really looking forward to playing the bigger teams and putting up some more good performances and just carrying on the momentum that we’ve built up so far,” Craig Ervine, Zimbabwe’s captain said.
It’s a far cry from the Zimbabwean side that were on the edge of their seats more than four years ago, when they bottled a chase of 230 in a rain-affected 40-over match against UAE and missed out on the 2019 World Cup. At 7 for 2 in their must-win game against Scotland on Friday, Zimbabwe feared history may be repeating itself but getting over the line in that match has helped them exorcise some of the ghosts of that previous failure.
“It’s been nice to qualify and put all those demons to bed from the UAE game. A lot of guys obviously had a few of those thoughts at the back of their minds – once we lost two wickets in the first couple overs against Scotland, but to get over the line there was absolutely crucial for us,” Ervine said. “There’s a bit of relief in the camp, and now guys will have a lot of weight off their shoulders, and can now enjoy the next few games.”
Related
With no further expectations or explicit targets in mind, Zimbabwe enter the Super 12s unshackled although they remain acutely aware of what they are up against. “It’s probably a little bit nerve-racking to have to play all these big teams again, but it’s a great opportunity for guys to put their hands up and get in some real solid performances,” Ervine said. “It does take away a little bit of the pressure that we have felt over the last week during the qualifiers. I think that guys will be able to express themselves a little bit more and just have a little bit more freedom to come out and just play the game of cricket.”
Though they are Full Members, Zimbabwe play significantly less cricket than the top eight teams and have the fewest fixtures on the next FTP. Their opportunities to test themselves against the best in the world are rare and limited, but not so far in the past that they can’t remember what is required. They last played against India and Bangladesh in August this year, against Pakistan in April 2021, and against their first Super 12 opponents, South Africa in 2018. But they have played more must-win cricket in Australia in the last week than any of those teams and have the advantage of getting their squad used to conditions and pressure situations.
Muzarabani, Chatara, and Raza have enriched Zimbabwe’s bowling stocks•AFP/Getty Images
So far, they have demonstrated that their strength lies in their varied bowling attack, led by a pace pack for whom Australian conditions appear to be tailor-made. “They’ve been so good for us up front with the new ball. We’ve picked up a few early wickets, which has helped the cause,” Ervine said. “Here in Australia, Blessing [Muzarabani]’s been able to extract a little bit of bounce, Richard Ngarava has been excellent up front as well, getting a little bit of movement with the new ball. And Tendai Chatara has been excellent with the new ball, and he’s been able to get it to go both ways.”
And after batting line-ups have got through that, Zimbabwe have at least three spin options, led by a resurgent Sikandar Raza, who has remodelled his action and developed deliveries including the carrom ball. “He’s always going to be a key performer for us in the order as well as with the ball,” Ervine said. “His contributions are obviously always so important because he strikes the ball so well. He scores so quickly and his four overs with the bowlers is huge and important for us, especially to slow down the run rate of the opposition.”
Zimbabwe’s weaker suit is their batting but Ervine is hopeful that they will play to their potential, and without fear, as the tournament progresses. “The first couple overs have been a little bit tricky in the lights just because there has been that little bit of movement around. So we are looking to try and have a look and see those first couple overs, see what’s happening and what sort of movement there is. From then on, it’s just kind of playing the bowlers on merit basically,” Ervine said. “Everybody’s got all the shots.” And Zimbabwe are ready to fire.
Tags: Blessing Muzarabani, Craig Ervine, ICC Men's T20 World Cup, Richard Ngarava, Sikandar Raza, Tendai Chatara, Zimbabwe