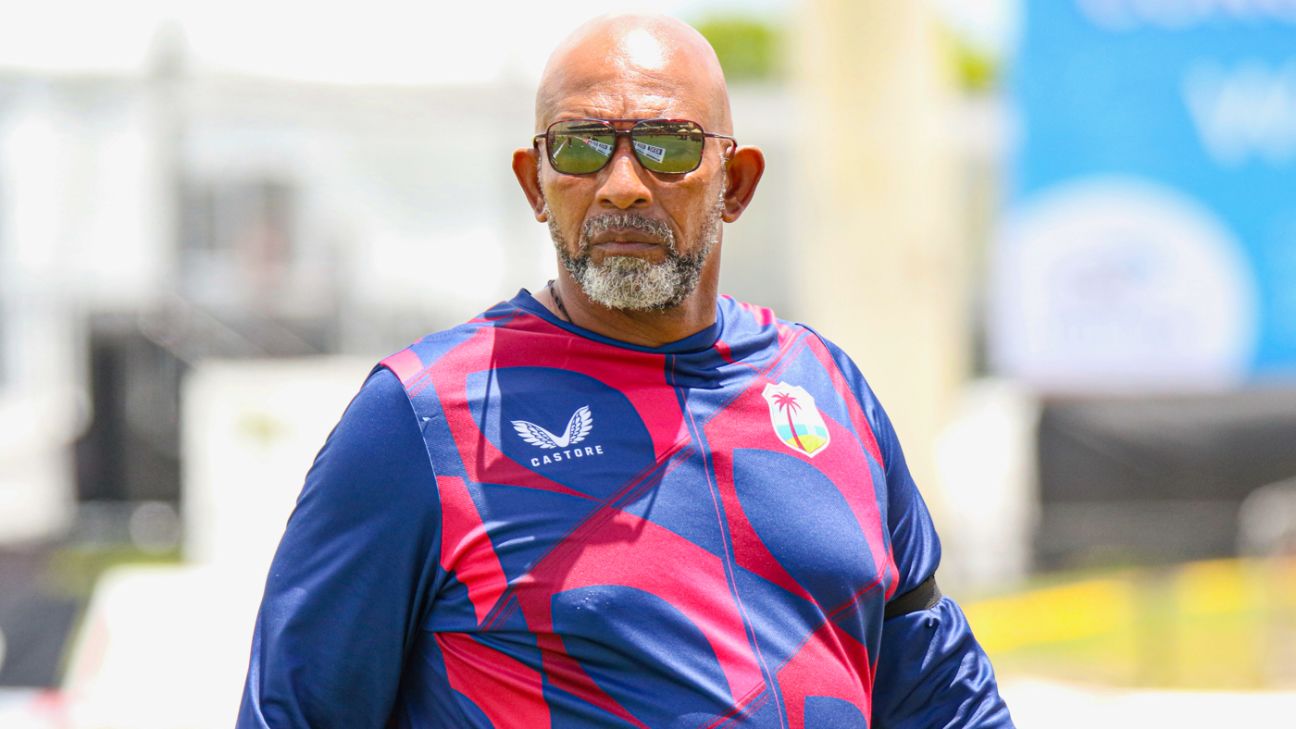 Phil Simmons has resigned as West Indies coach after his team crashed out in the first round of the T20 World Cup in Australia, an outcome he described as “unfathomable”.
West Indies were eliminated after finishing bottom of their group in Hobart, beating Zimbabwe in their second game but losing to Scotland and Ireland either side.
“I acknowledge that it’s not just the team that is hurting but the proud nations we represent as well,” Simmons said in a statement released by CWI on Monday night. “It’s disappointing and heart-wrenching but we just didn’t turn up.
“We weren’t good enough and we now have to watch a tournament play-out without our involvement. It’s unfathomable and for that I deeply apologise to our fans and followers.”
Related
Simmons’ second spell in the job started in October 2019, after an initial 18-month tenure in which he helped steer West Indies to the 2016 T20 World Cup, uniting a squad of big personalities and encouraging a pioneering batting approach focused on six-hitting.
The Test team’s results have gradually improved during that time, with series wins over England and Bangladesh earlier this year. But T20Is have been a different story and they have suffered early exits at the last two World Cups, losing four games out of five in 2021 and two out of three in Australia last week.
Phil Simmons will finish with the two Tests against Australia•Peter Della Penna
Simmons will remain in charge for the upcoming two-Test series against Australia, which starts on November 30 at Optus Stadium in Perth. He said that he would also participate in CWI’s postmortem into the World Cup exit.
Simmons added that he had been considering his position before the tournament. “From a personal perspective this is not a knee-jerk reaction, but a move I have been considering for some time, he said. “Now is the time to make public that I will step down as West Indies head coach at the end of the Test series against Australia.
“It is earlier than hoped for, but I will now focus my energies in Australia on continuing to build on the excellent progress the Test team has made. Of course, as the president has pointed out, we will also carry out the necessary review into our World Cup campaign.
“I must say I have enjoyed aspects of the unique challenge that being West Indies head coach provides and the unwavering support of my management team. There remain some exceptional individuals within CWI who I firmly believe will continue to work in the best interests of West Indies cricket.”
Ricky Skerritt, the president of CWI, said: “On behalf of CWI, I want to thank Phil for his hard work and dedication to West Indies cricket, most recently in his role as head coach. Phil is a proud West Indian, with high ideals and has never lacked motivation in guiding our younger players on and off the field of play.
“He brought valuable experience and stability at a very important period of transformation, including the most challenging environment of the Covid-19 pandemic. We wish him all the best in his future endeavors.”
Tags: ICC Men's T20 World Cup, Phil Simmons, West Indies