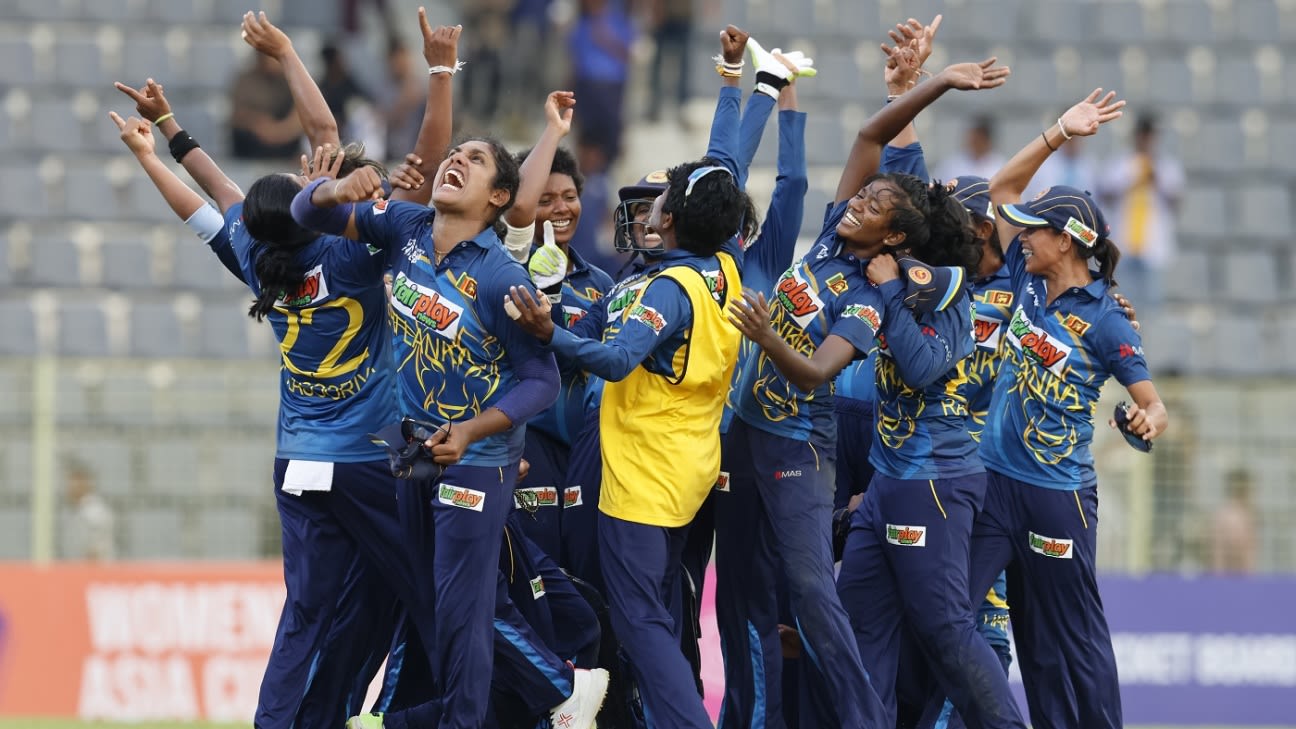 Sri Lanka Women 122 for 6 (Samarawickrama 35, Sanjeewani 26, Sandhu 3-17) beat Pakistan Women 121 for 6 (Maroof 42, Dar 26, Ranaweera 2-17) by one run
Achini Kulasuriya bowled a stunning final over to help Sri Lanka beat Pakistan in the second semi-final and march into the final of the Asia Cup. Kulasuriya bowled full and straight throughout the over and left Pakistan needing three off the last ball. But Nida Dar could not clear cover, where Kavisha Dilhari dropped the catch running backwards but recovered well to return a throw to the wicketkeeper, who ran Dar out to squeeze out a one-run victory.
It is Sri Lanka’s first T20 Asia Cup final, having made it to the title clash three times when the tournament was an ODI affair. Pakistan would feel hard done by, as they were cruising till captain Bismah Maroof was at the crease.
Kulasuriya does the magic
When Maroof got out in the 18th over, Pakistan were in the driver’s seat, needing a run-a-ball 16. But Inoka Ranaweera bowled a superb penultimate over – giving away just four and prising out big-hitting Ayesha Naseem cheaply – to leave eight for Kulasuriya to defend. Kulasuriya bowled full mostly and did not allow Aliya Riaz and Dar to free their arms. Eventually, it was down to three needed of the last ball but Dar couldn’t take Pakistan home, leaving Sri Lanka screaming in delight in front of the sparse crowd in Sylhet.
Kulasuriya did not let the over-rate punishment, due to which they were allowed a fielder less outside the inner ring in the final over, hamper them. Sri Lanka would also be thankful to their batters for their fine effort earlier, particularly at the start when they got a few boundaries to get things going.
Sanjeewani gives Sri Lanka quick start
Sri Lanka raced to 39 in the powerplay, thanks mainly to wicketkeeper-batter Anushka Sanjeewani’s 26 off 21 balls. After being promoted to open, she struck a four and a big six over square leg but fell in the last over of the fielding restriction. Chamari Athapaththu also hit a six but was the first batter to get out when she tried to slog Dar over long-on and was bowled.
Nashra Sandhu’s classic left-armer’s delivery – pitching in line and turning away past the outside edge – then deceived Sanjeewani, bringing an end to Sri Lanka’s powerplay exploits.
Bismah Maroof made 42 off 41 balls to set up the chase•Asian Cricket Council
Sandhu revives Pakistan after big stand
Harshitha Samarawickrama, however, ensured Sri Lanka didn’t let their good start go waste, adding 50 for the third wicket with Nilakshi de Silva. But the pair managed just one boundary between them, which Samarawickrama got during her 35 off 41 balls, before Sandhu removed her in the 18th over. Sandhu also had de Silva caught-and-bowled in her previous over, and finished with 3 for 17 from four overs.
Sadia Iqbal and Aiman Anwer too bowled excellently in the last few overs, both picking up a wicket each as Sri Lanka made only 35 runs in the last five overs. They slipped from 102 for 3 with 14 balls remaining, only to be restricted to 122 for 6 after 20 overs.
Muneeba fires up Pakistan
Pakistan responded to Sri Lanka’s fast start with one of their own. Sugandika Kumari was hit for back-to-back fours by Muneeba Ali before Sidra Ameen hit one in the third over of the chase. Muneeba struck the ball sweetly through point first, before executing the sweep to perfection on the next.
But Muneeba fell in the next over when she was run out trying to get a quick single. She twisted her ankle in the process, but her presence for a few more overs might have helped Pakistan carry on further after a bright start.
Bismah gets Pakistan to the brink
Sri Lanka stayed in the game with the wickets of Ameen and Omaima Sohail by the 11th over, but Maroof kept things tight at her end. She played the ball around for plenty of singles, apart from four boundaries. She struck two through fine leg, one past short third and the fourth over long-on.
Maroof added 42 for the fourth wicket with Dar but fell while trying to work the ball to the on side against Kumari. Little did she know her side would end up losing the game despite setting up the chase.
Tags: Bangladesh, Bangladesh Women, Inoka Ranaweera, Nida Dar, Pakistan, Pakistan Women, SL Women vs PAK Women, Women's Asia Cup