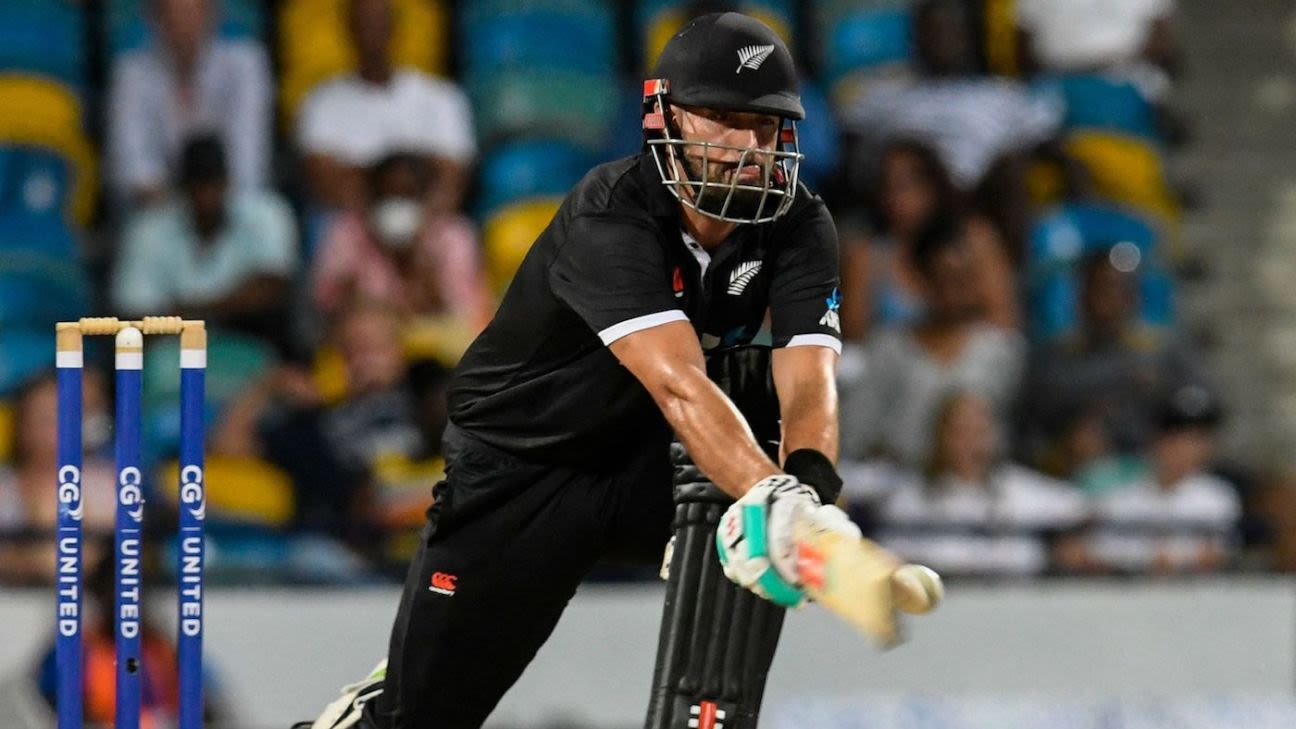 New Zealand head coach Gary Stead has said allrounder Daryl Mitchell, who sustained a fracture in his finger, is unlikely to be available for their T20 World Cup opener against Australia in Sydney on October 22. Stead, however, is hopeful that Mitchell will be available for their second match against Afghanistan.
Mitchell had suffered a blow on the little finger of his right hand while batting in the nets ahead of the recently concluded T20I tri-series against Bangladesh and Pakistan at the Hagley Oval. He was subsequently ruled out of the series and his participation in the T20 World Cup was also in doubt at the time.
Related
Mitchell’s unavailability for the opening match also means New Zealand will be without their first-choice XI, and the side will be taking a call on his replacement only after assessing the conditions in Sydney.
“Daryl would have been in our first XI so I think in all likelihood he is unlikely to be available for that first game,” Stead said. “It is more likely the second game is what we are targeting at this stage. I think the one thing we’ve not done is gone to Sydney and had a look at the pitch, what the condition of the pitch is. It’s obviously the first game of the World Cup and the first match is being played at the SCG after the AFL season as well. We just have to look at the conditions, have a look at what’s put in front of us before we make some calls on that final XI. But in terms of the structure of the side, we have tried to keep it reasonably consistent throughout the tri-series as well.”
Stead said that while New Zealand were mindful of the players’ workload considering they are coming into the World Cup immediately after the tri-series, all the players in the squad – except for Mitchell – will be given an opportunity to play in their upcoming warm-up matches against South Africa (on October 17) and India (October 19).
“For us, it’s managing guys’ physical and mental state leading into this first game,” Stead said. We’ll use the two warm-up games in all likelihood to play all members of the squad. Except obviously Daryl right now. Just sharing a bit of the workload around and making sure guys are ready for that first game.
“We’re still managing the workload of the players – there’s another two games in three days and with trainings around them as well coming off the back of the tri-series, there’s still a little bit of management of guys and making sure they’re physically just fine but more just that they need that freshness and readiness to go. It might sound strange but the five matches in seven days quite taxing and you put travel with it as well. We’ll certainly be taking this week just to manage the resources around.”
There were a number of positives for New Zealand despite their loss in the tri-series final against Pakistan. Allrounder Michael Bracewell emerged as a matchwinner for them with the ball on multiple occasions, while opening batter Finn Allen displayed his aggression from the top of the order, striking at 145.16. Stead was also pleased to see captain Kane Williamson return to form with a 38-ball 58 in the final.
“It’s great to see Kane back hitting the ball as he was,” Stead said. “He went out with great intent and showed that he can play those match innings that just change the game as well. I don’t think I put Kane necessarily in that sort of power sort of a category but I’ve said for a while you’ve got guys like Devon Conway who through batsmanship can actually generate strike rates and be as good as anyone in the world. He showed that last year and in the World T20 final and it was great to see him back.”
Stead also indicated that Glenn Phillips, and not Allen, will be the back-up wicketkeeper to Conway at the moment.
“I think tomorrow Glenn Phillips will probably take the gloves just for a short period of time,” Stead said. “Finn Allen’s another option for us. For the moment we just allow him to keep going with the bat the way he is. He is an outstanding fielder as is Glenn as well. That’s something we hope won’t happen obviously but if something happens to Devon, then we would fly a keeper-batsman over to fill that spot.”
Tags: Daryl Mitchell, Gary Stead, ICC Men's T20 World Cup, New Zealand