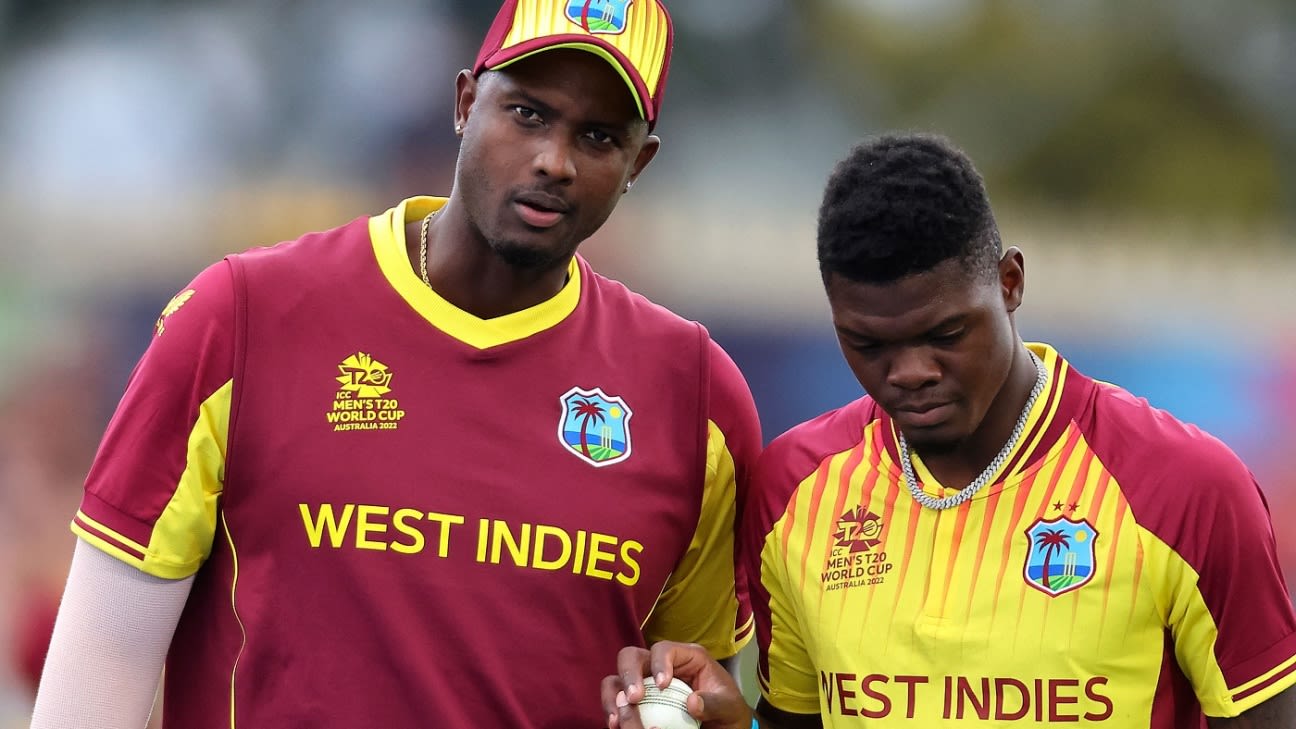 Kieron Pollard has described West Indies’ failure to make the Super 12s of the 2022 T20 World Cup as a “sad day” for Caribbean cricket. The former captain, who retired in April, said he was both “surprised” and disappointed at West Indies’ exit and agreed that head coach Phil Simmons will now come under pressure to keep his job. Pollard, however, stressed that the blame had to be shared by all stakeholders and not any individual.
“A bit surprised, to be honest that [West Indies] weren’t able to get over the line against the other teams,” he told i95.5fm, a Trinidad-based radio station last weekend. “But again, that speaks volumes of where our cricket as is at the moment. I feel it. I feel it for the guys because they are the ones that are going to get the bashing. And it’s not all their fault.”
Having already failed to secure direct entry into the Super 12s (permitted to the top eight-ranked teams at a pre-determined cut-off date as well as the hosts Australia), Nicholas Pooran’s team struggled badly in the first round, notching a solitary win, against Zimbabwe, while losing to Scotland and Ireland which forced them out of the tournament.
Related
The shocking exit invited derision both at home and abroad. Cricket West Indies president Ricky Skerritt issued a scathing statement saying a “post-mortem” would be carried out immediately, while former Australia captain Ricky Ponting described the team’s performances as a “disgrace.”
Pollard, though, was not interested in hauling up Pooran and his men. Instead he highlighted a wider point, especially on selections, which he said played a part in their dismal showing at the 2021 T20 World Cup as well, where he was the captain. West Indies crashed out of that competition with a solitary win alongside four defeats.
“We have a young captain, we have young players, guys who would have played only a handful of [matches in] T20 cricket and now they are in the World Cup,” Pollard said. “And when I look back at it, I sit back and I have a smile on my face. Because I remember some of the things that was said last year around this time, when some individuals weren’t selected.
“I just had to remind these people that there was a World Cup we were going to [in 2021] and another bilateral series [in New Zealand]. And now some of the individuals get the opportunity to play in the World Cup. And, again, look what has happened. It’s no fault of theirs. But when we tried to sort of protect them and let people understand [in 2021], they were not ready for that, we were lambasted. There were a lot of things that were said that were very derogatory at times. It’s a sad day for West Indies cricket and all of us.”
Just like last year’s World Cup, West Indies’ selections became a big talking point. The Desmond Haynes-led panel named a 15-member squad that did not feature the two best T20 players in the Caribbean: Andre Russell and Sunil Narine. At the time, Haynes explained this decision by saying Russell was not performing the way they would like and Narine appeared disinterested in playing for West Indies.

“When I look back at it, I sit back and I have a smile on my face. Because I remember some of the derogatory things that was said last year as well around this time, when some individuals weren’t selected. They were not ready for that and we were lambasted”
Pollard believes West Indies’ problems run deeper than just individual players

The CWI then dropped Shimron Hetmyer for failing to get on a rescheduled flight to Australia. Only two players, Pooran and Evin Lewis, were part of the original 15-member squads in both 2021 and 2022. Along with Rovman Powell, they were the only three with at least 50 T20Is under their belt. Jason Holder has 49, and is a former captain and a World Cup winner. After that, West Indies were struggling for experienced campaigners. This was in contrast to the 2021 squad which featured Pollard, Chris Gayle, Dwayne Bravo, Russell and Lendl Simmons.
“Experience means a lot. And we take that for granted in the Caribbean,” Pollard said. “[There] has been a notion over the years [that] as soon as you reach a certain age, you should be done away with. And when you have guys in the team, they want you to get out of the team or when the guys are not there, they understand the importance of the guys. And this is another situation of not having couple of experienced guys around to help the youngsters, to help the youth.”
Haynes had pointed out that form in the 2022 CPL would play a key role in the World Cup squad selection. Pollard said that while that was fine, other parameters needed to be considered.
“Not just based on form. It’s a holistic sort of approach on what you bring in all different facets and dimensions of the team. A guy might not be in form, but the experience and the knowledge that he can bring and share and help someone can be valuable as well. But again, we as a people, we go with what we see in front of us. So the last thing we would have seen maybe would have been the CPL before the team was selected. And whoever did well in two games, they should be selected. And that’s not how that’s not how it goes.”
Pollard believes West Indies have gone “downhill” ever since their triumph in the 2016 T20 World Cup•Saurabh Das/Associated Press

According to Pollard, West Indies’ “decline” in T20 cricket is not a recent occurrence. It had begun in 2016, immediately after they became the first team to win two T20 World Cups. Since that tournament six years ago, West Indies have won 33 out of the 99 T20Is they have played, including 58 defeats. During Pollard’s tenure as T20I captain, West Indies won 13 out of 39 matches with 21 losses. Under Pooran, who replaced Pollard this May, West Indies have won eight out of 23 matches including 14 defeats.
Pollard blamed the “culture” for failing to have former cricketers as part of the system and helping it grow.
“We dominated in the 80s, which was all well and good [but] what did we do for the future? We went downhill. We won our last World Cup in 2012 and 2016. The decline of our T20 team started in 2016. The then captain, Daren Sammy, played his last game in 2016. All the guys who played and won that World Cup did not play cricket together for how many years after that – that is where the decline of our T20 cricket started. Since then we moved from the No. 1 in a space of months to No. 7. Why?”
Coming back to the present, Pollard expects coach Simmons to face some heat, but believes that letting him go wouldn’t solve any problem.
“I won’t get into all of that right here and now. The easiest thing for us to say and to do [is]: ‘fire coach, fire the captain, change the players and that’s going to be a difference.’ That’s not going to happen.”
A better way, Pollard stressed, would be to have all stakeholders have an honest discussion to find a way forward to help West Indies cricket.
“All stakeholders need to come together. When I say all, I mean everybody and sit down and decide where we want to take cricket in the Caribbean We need to improve our facilities. We need to have academies. We need to put things in place for the younger ones, so they can be the ones to do West Indies proud. And if we don’t do that and we just continue to fight, politicise, be insular, then we are going nowhere.”
Tags: ICC Men's T20 World Cup, Kieron Pollard, West Indies