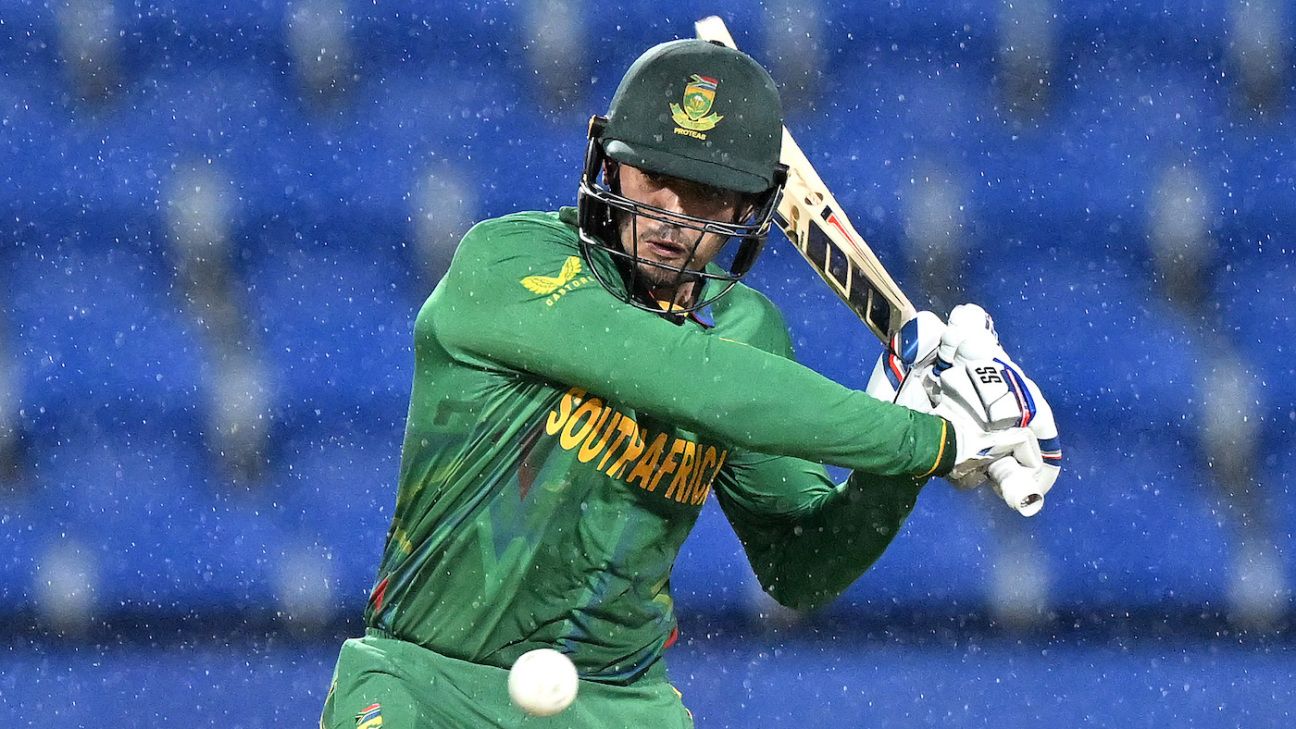 No result Zimbabwe 79 for 5 in 9 overs (Madhevere 35*, Ngidi 2-20) vs South Africa 51 for 0 in 3 overs (de Kock 47*)
South Africa were denied a victory in their T20 World Cup opener after rain ensured their shortened fixture against Zimbabwe could not be completed. After a two-hour-and-35-minute delay, the match was reduced to nine overs a side. Zimbabwe recovered from being 19 for 4 to set South Africa a target of 80, which was then cut down to a target of 64 in seven overs after another weather interruption. South Africa were well ahead of their five-over DLS par score when the players went off for rain again, but they had only faced three overs at that point – a T20 match is only completed when both teams have faced at least five overs.
South Africa could have still won had the match officials been able to restart the game as a five-over chase. With South Africa already past the five-over par, the players would only have needed to get on the field – a result would have been achieved even if rain had sent them back off immediately.
But there was no resumption of any kind. The rain grew heavier, and hands were shaken and points shared. This was a similar result to Australia’s no-result against Bangladesh in the ODI Champions Trophy in 2017, when they were ahead of their 20-over par score when play ended, but had only faced 16 overs at that point.
After their net run rate prevented them from advancing to the knockouts last year, South Africa batted as though they were acutely aware of the need to score quickly this time. Quinton de Kock blasted an unbeaten 18-ball 47, with eight fours and a six, and hogged the strike but it was not enough to get them over the line, with rain preventing them from getting to the five-over mark.
Quinton de Kock’s unbeaten 18-ball 47 almost won it for South Africa but rain had the last laugh•ICC via Getty
The one point South Africa have missed out on could be crucial in the context of the tournament. Assuming there are no major upsets in this group, their match against Pakistan on November 3 could become a virtual quarter-final.
First a comedy of errors; then bullseye
South Africa should have had one, and could have had both Zimbabwe openers run-out at the end of the first over when Regis Chakabva mishit Kagiso Rabada back to him and was called through for a run from Craig Ervine. Chakabva answered the call as Rabada gathered and threw wildly, and wide, of de Kock behind the stumps. Ervine was still midway down the pitch and South Africa composed themselves enough to throw the ball down to the non-striker’s end, where Tristan Stubbs was backing up. The ball skirted past him and Ervine found his ground while Rabada giggled at the shenanigans.
He was smiling three overs later when Wessly Madhevere tapped Wayne Parnell into the covers and took off. He collided with his batting partner Sean Williams mid-pitch, by which time Miller had gathered and chose to aim at the striker’s end. He had two stumps in his sights and nailed them, catching Williams well short of his ground.
Poor in the Powerplay
A nine-over innings can only be approached in one way: swing. And that’s what Zimbabwe did. Or at least tried to do. Chakabva is still searching for his touch after scores of 0, 13 and 4 in the opening round and was tentative against Rabada but Ervine heaved at the first two deliveries he faced from Parnell before toe-ending a catch to Lungi Ngidi at mid-on. Chakabva showed some intent when he sent Ngidi over deep midwicket but Ngidi quickly dragged his length back and had Chakabva nicking off off the next ball. Zimbabwe sent in Sikandar Raza early but he could not continue his stunning run. He top-edged a short ball high and almost over de Kock’s head, but the South Africa keeper timed his jump well and snatched it with one hand. Zimbabwe’s three-over powerplay brought only 14 runs for the loss of three wickets.
2:47

Houghton: ‘I don’t think we should have bowled even one ball’

Madhevere and Shumba take the fight to South Africa
Things went from bad to worse for Zimbabwe when they slumped to 19 for 4 and the match appeared in danger of becoming a complete blow-out. But Madhevere, who was shifted down to No.5 to make space for the big hitters at the top, combined with Milton Shumba to give Zimbabwe’s attack something to defend. The pair put on 59 runs in five overs, which included 17 runs off Rabada’s second over, which Madhevere used to show his class. He sent Rabada over mid-wicket for six, then cleverly uppercut a slower bouncer over de Kock’s head for four and then cut a short, wide delivery past backward point for four more. Madhevere finished with an unbeaten 35 runs off 18 balls, at a strike rate of 194.44.
Quinton goes quickly
If Zimbabwe thought they had something to work with, de Kock quickly showed them it was not nearly as much as they thought. He tucked into Tendai Chatara’s first over, which he plundered for 23 runs. De Kock moved across his stumps to hit the first ball over short fine leg for four, then pulled a short ball in front of square for four more and then top-edged the third delivery high but safely. His best shot was off the fourth ball, which he swung over long-on, before another pull through deep square leg. De Kock was going for the full house and pulled the final delivery but only managed to glove it for a single.
De Kock carried on in the same vein, hitting Richard Ngarava for four fours in the second over, before Raza came on to quieten South Africa somewhat, giving away only 11 runs off the third over. South Africa were well on course still, though, but the weather gods had other ideas.
Tags: ICC Men's T20 World Cup, Quinton de Kock, South Africa, Wessly Madhevere, Zimbabwe, Zimbabwe vs South Africa