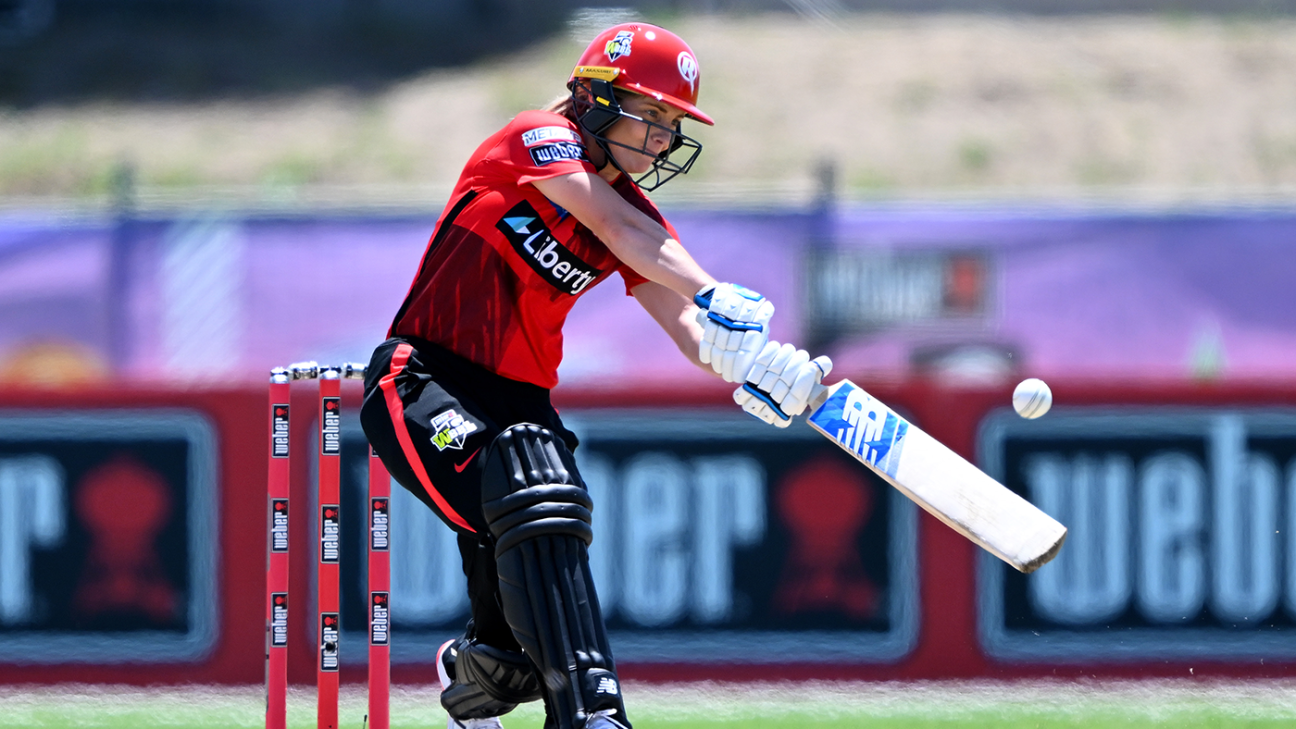 Melbourne Renegades 6 for 128 beat Adelaide Strikers 7 for 126 (Molineux 4-32) by four wickets
Sophie Molineux has continued her rich vein of form to help set up the Melbourne Renegades’ nail-biting four-wicket WBBL win over Adelaide. In a heart-stopping opener to a Mackay double-header, Renegades looked in control chasing the Strikers’ 7 for 126 before tightening up late. With three runs needed from the final two balls, Sarah Coyte proved the match-winner against her former team when she hit a Deandra Dottin delivery to the square-leg rope to claim victory with one ball to spare.
It came after Molineux had starred with bat and ball with returns of 4 for 23 and 32 as she continues her comeback from a 10-month long injury. Ruled out of the Ashes, ODI World Cup and Commonwealth Games, Molineux is one of several players vying to fight their way back into a changing Australian team. She has done herself plenty of favours in the past month. She hit scores of 56 and 113 for Victoria on return from injury in the WNCL, before being the Renegades’ best in their WBBL season opener on Sunday. The left-arm finger-spinner took two wickets in two balls early when she removed Laura Woolvardt and Bridget Patterson, both to smart catches from Josie Dooley and Eve Jones.
Molineux returned to get the key wicket of Tahlia McGrath on 35 when she took her off-stump, before also getting Maddie Penna late for 36. And after spilling two catches of her own in the field, Molineux then rode her luck with the bat. She should have been run out on 16 and 22 and also stumped on 19 when she skipped past a Jemma Barsby ball.
But still she was able to set the tempo for the innings early, helping launch the Renegades’ chase with her 35-ball knock. And while Megan Schutt and Amanda-Jade Wellington kept the Strikers in the match, Coyte was eventually able to seal the win late in her first game for the Renegades. Fast bowler Darcie Brown was clocked at 127.2kph in her first over which is believed to be the highest-recorded delivery in the WBBL.
Sophie Ecclestone and Ash Gardner celebrate•Getty Images
Sydney Sixers 6 for 147 (Healy 43) beat Melbourne Stars 9 for 120 (Brown 3-25) by 27 runs
Sydney Sixers reclaimed their status as a WBBL heavyweight, beating Melbourne Stars to go three-from-three to start the season. A one-time glamour club of the competition, Sixers have missed the last three finals series and sunk to a first wooden spoon last summer. However they appear to be back as a genuine force, with a 27-run win leaving them first on the ladder and already one victory shy of the four they claimed all of last summer.
After Alyssa Healy’s 43 from 32 balls helped the Sixers to 6 for 147, Ashleigh Gardner led the way with the ball with 2 for 19 and Maitlan Brown took three. Stars had only really looked in the hunt early, when English duo Lauren Winfield-Hill (20) and Bess Heath (37) put on 50 for the first wicket inside seven overs. But they lost a steady stream of wickets from that point on, with the game all but over when Sophie Ecclestone threw down the striker’s-end stumps in her own follow-through to run out a charging Tess Flintoff for 3.
Healy’s knock will act as a significant confidence boost for the Sixers. Low on runs in recent months, the wicketkeeper-batter hit six fours, with the pick of them being a reverse sweep off Sasha Moloney. Ellyse Perry scored 28 off 30 and took a superb leaping catch to get rid of Kim Garth, after racking up knocks of 55 and 58 on Thursday and Saturday night against Brisbane and Adelaide.
Perth Scorchers 1 for 89 (Devine 44*) beat Sydney Thunder 8 for 88 by nine wickets
Defending champions Perth Scorchers again showed they are a force as they thrashed the Sydney Thunder. Lilly Mills, Marizanne Kapp and Alana King each bagged two wickets and Maddy Green claimed the catch of the weekend at Blacktown.
Only Tahlia Wilson (28) – who hit four of Thunder’s eight boundaries – and Anika Learoyd (26) reached double figures for the Thunder, whose score of 8 for 88 was the lowest in the club’s history. There were 68 dot balls in the innings. Sophie Devine struck an unbeaten 44 from 42 balls to help Perth chase down the target with 31 deliveries to spare to start the Scorchers’ campaign.
Tags: Adelaide Strikers Women, Alyssa Healy, Ashleigh Gardner, Darcie Brown, Melbourne Renegades Women, Melbourne Stars Women, Sixers Wmn vs Stars Wmn, Sophie Molineux, Strikers vs Renegades Wm, Sydney Sixers Women, WBBL