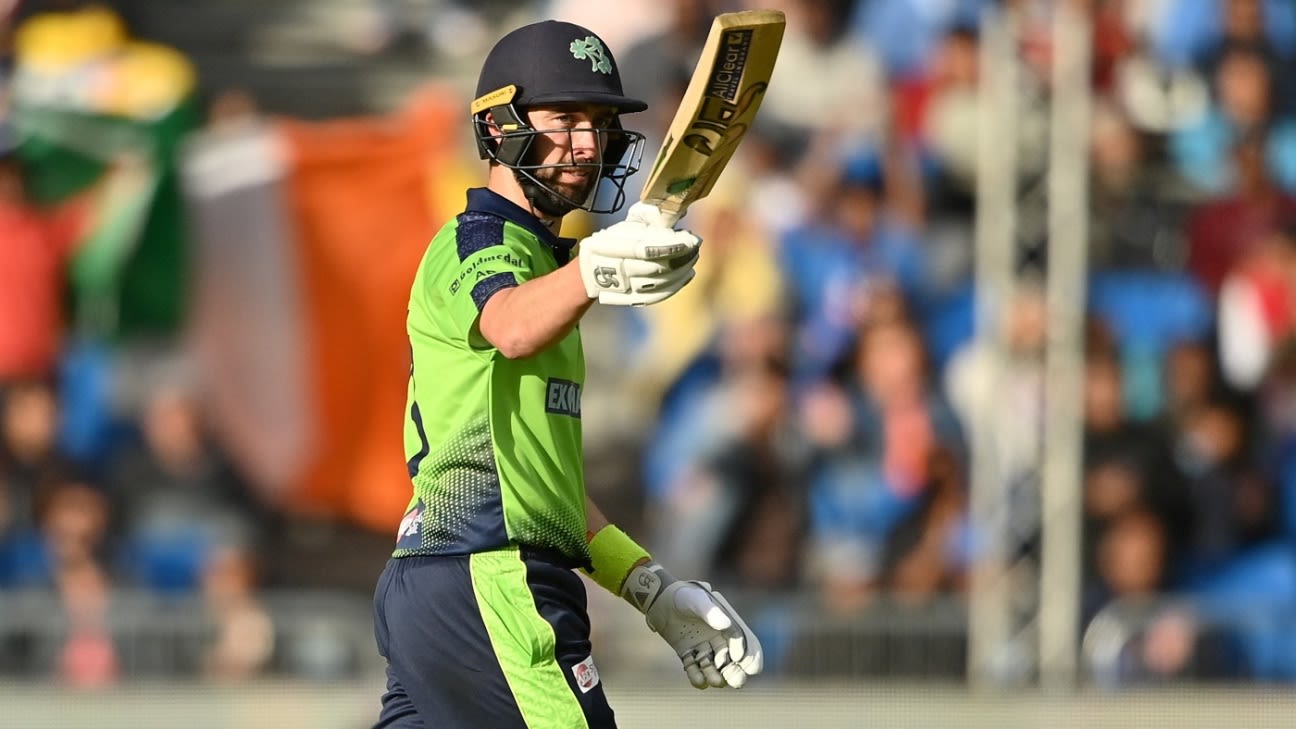 Ireland captain Andy Balbirnie believes that a shift in focus from results to performance this year will help his side go into the T20 World Cup with a better mindset.
It may even be necessary given Ireland will play their first match of the tournament against Zimbabwe in Hobart on Monday on the back of losing a number of matches at home in a surprisingly busy summer this year.
Ireland lost 10 white-ball matches against India, New Zealand and South Africa between June and August, but rounded it off with a 3-2 win over Afghanistan in a T20I series.
“I think there’s been a big shift in focus in the performance/result based talk,” Balbirnie said. “I think last year we got caught up making sure we got the results rather than focusing on the performance. That shift in mindset has freed up a lot of our players. We played a lot of good cricket this summer without winning.
“But we are pretty happy how we played, we know that if we keep playing this sort of cricket, more often than not we will get the right results. Certainly in a competition like this you need to get wins, but I think our message is loud and clear: we want to play pretty good cricket. Excite people. If we get the results, that’s great. But as long as we are putting in those performances, we will be happy.”
Balbirnie was also relieved that his mostly young team will have the freedom to move about this time, unlike last year, when the threat of Covid-19 was still quite significant. The 31-year old captain said that having family around and being able to just get a coffee is important to tune out the pressure they are under.
1:21

“Qualifying in Oman was such a relief. Australia is the best place to tour in my opinion. Not having bubbles has made a big difference to the guys. To get out and get a coffee, having wives and girlfriends over, that just takes your attention away from cricket. It makes a big difference for the lot of the group. I think last year, just going to the hotel after matches had a damaging effect on a lot of cricketers around the world.
“I think it is a big difference in this World Cup. It is a lot more relaxed. There’s a lot more better feeling within the group. I think we are in a really good place. We haven’t had the prep that we wanted but every team is in the same boat. There’s been a lot of rain in this part of the world.”
Ireland will also bank on fond memories in Hobart where they beat Zimbabwe by five runs in the 2015 World Cup. Balbirnie, who top scored then with a quickfire 97, said that they never thought they would be back at the same venue, seven years later.
Related
“I remember it being as probably one of my most memorable games in an Irish shirt,” he said. “Getting runs was nice but from a team win point of view. It was a really high-scoring game on a really good wicket. I imagine it will be pretty similar although it is a different time of the year. I am really looking forward to getting out there tomorrow.
“I was out having dinner with George [Dockrell] and Paul [Stirling] who were there that day. Back then, we didn’t think we’d be back here to play the World Cup.”
Balbirnie has full trust in his squad, which contains a number of promising players under the age of 25, but doesn’t want them to think too much about the challenge of the next week. “I think they are pretty tuned-in young guys,” he said. “We are trying to help the young guys the best we can. These World Cups can be pretty daunting, but the group has played against top opposition before and they’ve embraced that challenge.
“The only thing that can hold us back this week is if they get overawed by it. They played in the World Cup last year. It is nice to see some of the families coming to Hobart in the last 24 hours. It is certainly nice to see some familiar faces around the town.”
Tags: Andy Balbirnie, ICC Men's T20 World Cup, Ireland, Zimbabwe vs Ireland