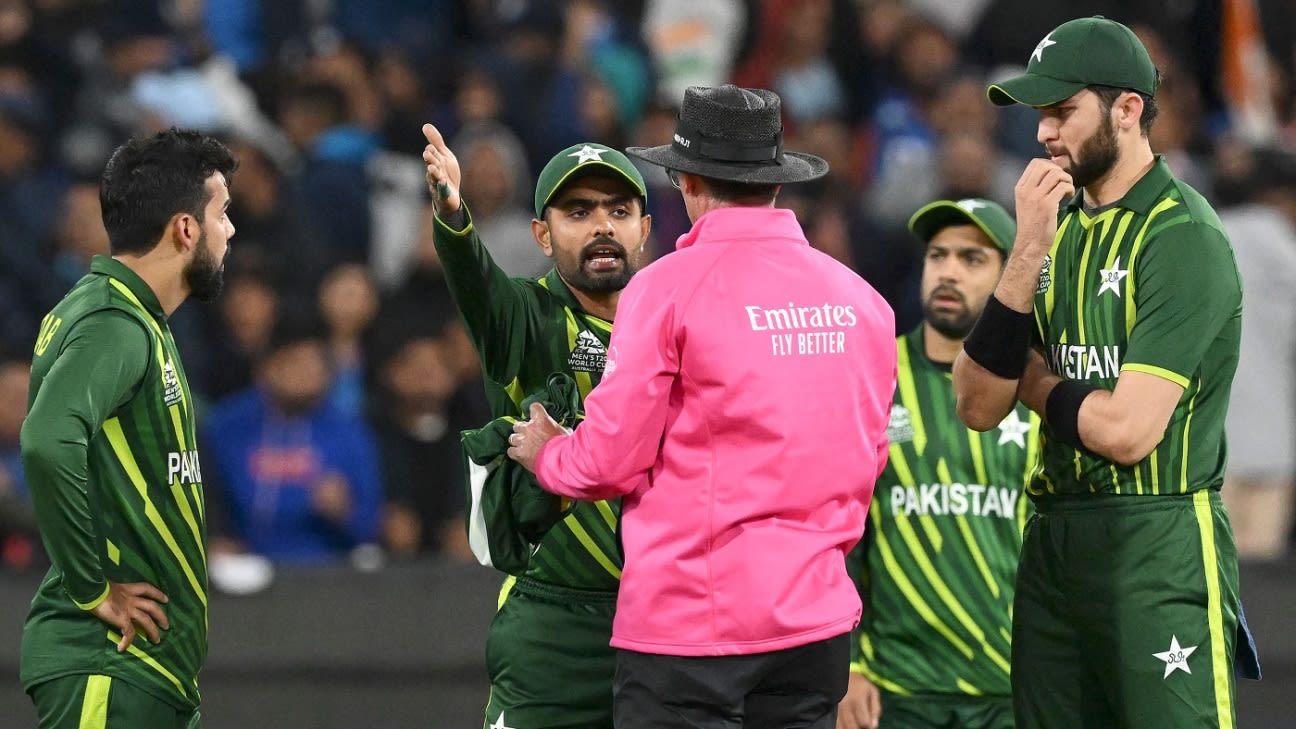 In the aftermath of two derbies, two different moods. Zimbabwe upset with having had to carry on in the conditions they did against South Africa, but no doubt relieved to have come away with a point. Pakistan, meanwhile, anguished at seeing two points slip away in that wild last over at the MCG against India.
In other times, that kind of loss might have felled other Pakistan sides, but there’s something more settled about this one. They may rue not picking a fourth pacer at the MCG, but Mohammad Nawaz was not far from winning it: a little luck with the deflection off the stumps on the free-hit, a little fortune with that no-ball call, and they’re sitting pretty now. In the dressing room after the game, Babar Azam was not letting heads fall, telling Nawaz he was still his match-winner. Imperfect they may be, but they’re more together than most Pakistan sides of modern vintage.
Related
And at the risk of stating the obvious, they are also still a pretty good T20I side. They have the second highest number of wins and the third best win-loss ratio among Full Members since the last T20 World Cup. They will also take some heart from their middle order managing a competitive total after a rare joint failure of Babar and Mohammad Rizwan. They are also unlikely to come across conditions as tough for batting as they were at the MCG.
Zimbabwe will look at all this, however, and recognise a side that they have had the better of twice in white-ball cricket in the last two years. As many as nine who may play in Perth will have beaten Pakistan in the Super Over of a tied ODI in Rawalpindi or a T20I in Harare.
A little luck in that last over against India and Pakistan would have been sitting pretty now•Getty Images
Now, under coach Dave Houghton, Zimbabwe have also started taking a more attacking approach. That has crystallised most vividly in the form of Sikandar Raza, arguably the player of the tournament so far. But high-quality pace bowling has tested their batting resources beyond Raza twice now: Alzarri Joseph in the first round and South Africa’s attack in the wash-out.
Pakistan have plenty of that.

Shaheen Shah Afridi’s long-awaited, much-anticipated return to international cricket was an underwhelming one. Perhaps that was to be expected, given the nature of the injury and ensuing rehab and the length of time he was out. This was, remember, his first international game in three months. It led to both the Ws, Wasim Akram and Waqar Younis, asking on a TV show whether Afridi had been rushed back before he was fully fit. He didn’t get the kind of sustained swing that might have been expected after India’s opening bowlers did what they did. He wasn’t awful, just a little ordinary, and it was only in his last over when Virat Kohli went at him did his figures take a beating. He narrowly missed his lengths a couple of times in that over, a sure indicator of rustiness rather than anything more terminal. Away from the glare of a big game, against a lesser opponent, might be a good time for him to settle back into his groove.
Zimbabwe’s pace attack has served them well in the tournament so far, though none more than Blessing Muzarabani. His height and the extra bounce on most Australian surfaces was always going to be a trump card for Zimbabwe to pull out at the tournament and it hasn’t been disappointing. He has sometimes struggled to hit the right lengths for each situation, but when he has, he has been difficult to keep out. It has come with decent pace as well. And he doesn’t mind Pakistan as opponents – it was his five-for in that Rawalpindi ODI (and two wickets in the Super Over) that secured a memorable triumph. Pakistan often struggle against bounce, and if Muzarabani gets it right, then, well, it could be a battle.
Blessing Muzarabani will be Zimbabwe’s trump card•ICC via Getty Images

There was plenty of talk around Pakistan not playing a fourth seamer at the MCG, though with the definite benefit of hindsight on a surface that did plenty for fast bowlers. They could bring somebody like Mohammad Wasim in and drop one of the perennially under-fire Haider Ali or Asif Ali (especially as Wasim has six-hitting skills) from a deep batting order. But they don’t like changing unless they really have to, and it may not be that stage yet.
Pakistan (probable): 1 Babar Azam (capt), 2 Mohammad Rizwan (wk), 3 Shan Masood, 4 Iftikhar Ahmed, 5 Haider Ali, 6 Shadab Khan, 7 Asif Ali, 8 Mohammad Nawaz, 9 Haris Rauf, 10 Shaheen Shah Afridi, 11 Naseem Shah
Richard Ngarava’s slip in the rain against South Africa and subsequent ankle injury means Zimbabwe may be forced to disrupt their pace attack. Brad Evans – whom captain Ervine said would likely play if Ngarava is not fit – is not a like-for-like replacement, but he does bring genuine pace.
Zimbabwe (probable): 1 Craig Ervine (capt), 2 Regis Chakabva (wk), 3 Sean Williams, 4 Sikandar Raza, 5 Wessly Madhevere, 6 Milton Shumba, 7 Ryan Burl, 8 Luke Jongwe, 9 Richard Ngarva/Brad Evans, 10 Tendai Chatara, 11 Blessing Muzarabani

The forecast in Perth is for partly cloudy conditions but no rain. The pitch has a green tinge and the new ball has swung. While there’s pace and bounce for the fast bowlers, runs can also be scored quickly, especially straight. Spinners often suffer if they bowl too full, but can tie it up in the middle overs by bowling a back of a length and forcing batters to hit to the vast square boundaries with the ground similar to the dimensions of the MCG.

“The morale of the boys is high. We are trying to prepare for the next game and come back strong and remain in contention for this World Cup.”
Pakistan allrounder Ifitkhar Ahmed
“I’m pretty sure Pakistan will be coming hard for us. The first five-six overs with the new ball has been challenging for every team. It’s a key area to get through.”
Zimbabwe captain Craig Ervine
Tags: ICC Men's T20 World Cup, Pakistan, Zimbabwe, Zimbabwe vs Pakistan