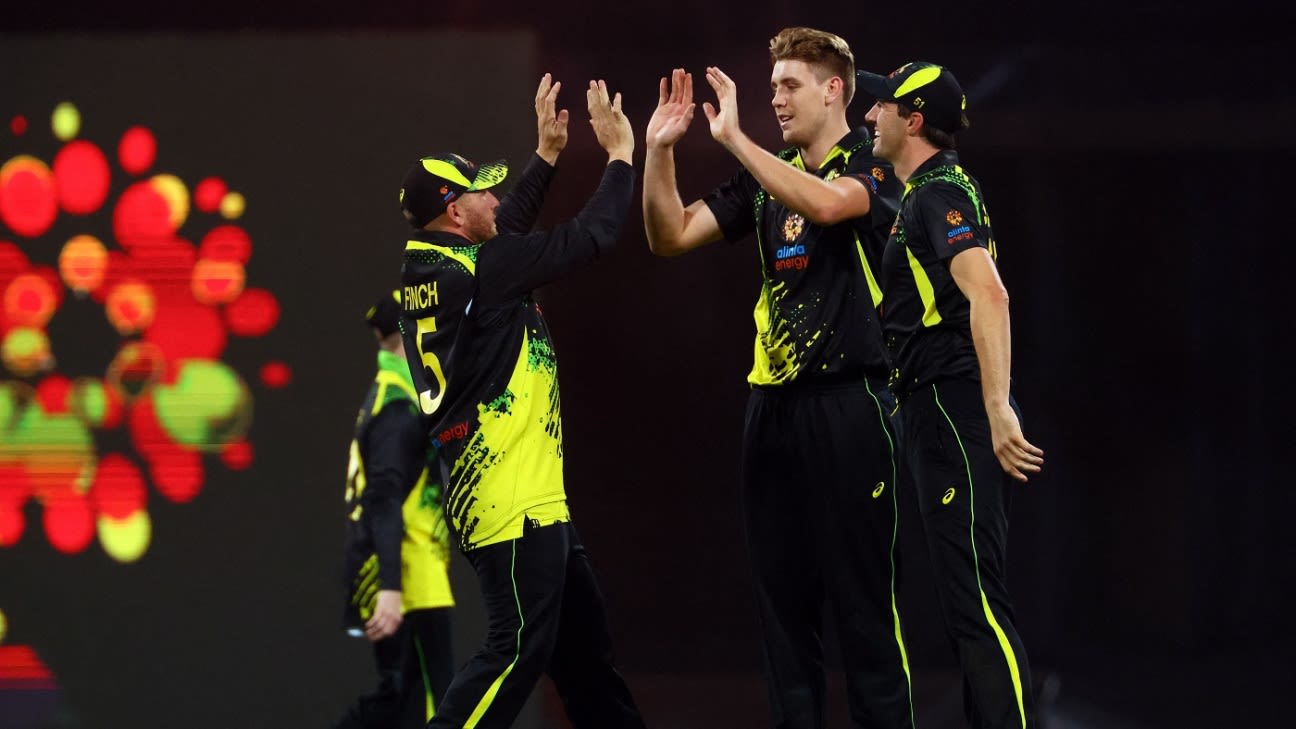 Cameron Green has been called into Australia’s T20 World Cup squad after Josh Inglis, the reserve wicketkeeper and a spare batter, was ruled out due to a hand injury he suffered playing golf in Sydney on Wednesday.
It means that Australia will not have a back-up wicketkeeper in their 15-member squad, and while a replacement could be added if Matthew Wade was injured, that would not cover a problem emerging on the day of a game which would leave them scrambling within their ranks for someone to take the gloves.
In that – albeit unlikely – scenario, the job would probably go to David Warner, who once previously kept with during a Test against Pakistan in 2014, although captain Aaron Finch has also done it briefly in the BBL. Coach Andrew McDonald even floated Mitchell Starc as an option.
Related
Australia have previously gone into World Cups without another frontline wicketkeeper, including the 2015 ODI event on home soil where Brad Haddin was the only option.
“If you look back over World Cup squad selections, there have been plenty of times where Australia have gone in with only one frontline keeper in the squad,” McDonald said. “And that is to give greater flexibility to batting and bowling structures in the team. It’s a conversation about how we want to give ourselves the most options, rather than potentially covering the small risk that is there.”
Inglis was assessed in hospital yesterday after his right hand was cut when a golf club snapped, and although the timeline for the recovery is not long – and there is no tendon damage – he will now miss the tournament.
The selectors spent the day weighting up their options for a replacement which also included a like-for-like in Alex Carey, Josh Philippe or Ben McDermott, alongside a call-up for pace bowler Nathan Ellis, but in the end opted for Green who had been part of Australia’s T20I set-up in the lead-up to the tournament.
Green had impressed on the tour of India with two rapid half-centuries opening the batting, but did not enjoy the same success against West Indies or England at home. However, before Green’s call-up was rubberstamped, McDonald had confirmed that Green would not come straight into the XI.
“Does it create a headache if we bring him in? No, it probably just gives us more options,” he told reporters at the SCG. “If Cameron Green was considered in the starting XI before the tournament started, then he would have been in the 15; and he’s not, so if he was to come in, there’s no way – unless there’s another injury – that he would come into the starting XI.”
Inglis, who has played nine T20Is so far, was anyway unlikely to feature in Australia’s starting XI during the tournament unless there was an injury to Wade, or a concussion substitute was required.
He was also part of the squad for the previous men’s T20 World Cup in the UAE. However, he featured in just three of Australia’s games leading into this tournament: two matches on the tour of India and then the warm-up game against same opponents at the Gabba on Monday.
“The whole group is flat,” McDonald said. “Even though he hasn’t played a lot of cricket, he’s an important member of the squad, [and] was part of the last World Cup campaign as well. He’s obviously gutted; it’s a tight-knit group and any time something like this happens you feel for that person.”
Inglis has made a good impression in his limited opportunities, with a strike rate of 141.02 from his inventive batting. He is viewed as the natural successor to Wade whenever he retires.
Also, England wicketkeeper-batter Jonny Bairstow was ruled out of the tournament due to a golf mishap too, when he suffered a badly-broken ankle caused by slipping on a tee box on the day the squad was announced.
07.24GMT This story was updated after Cameron Green was confirmed as Josh Inglis’ replacement
Tags: Australia, Cameron Green, ICC Men's T20 World Cup, Josh Inglis