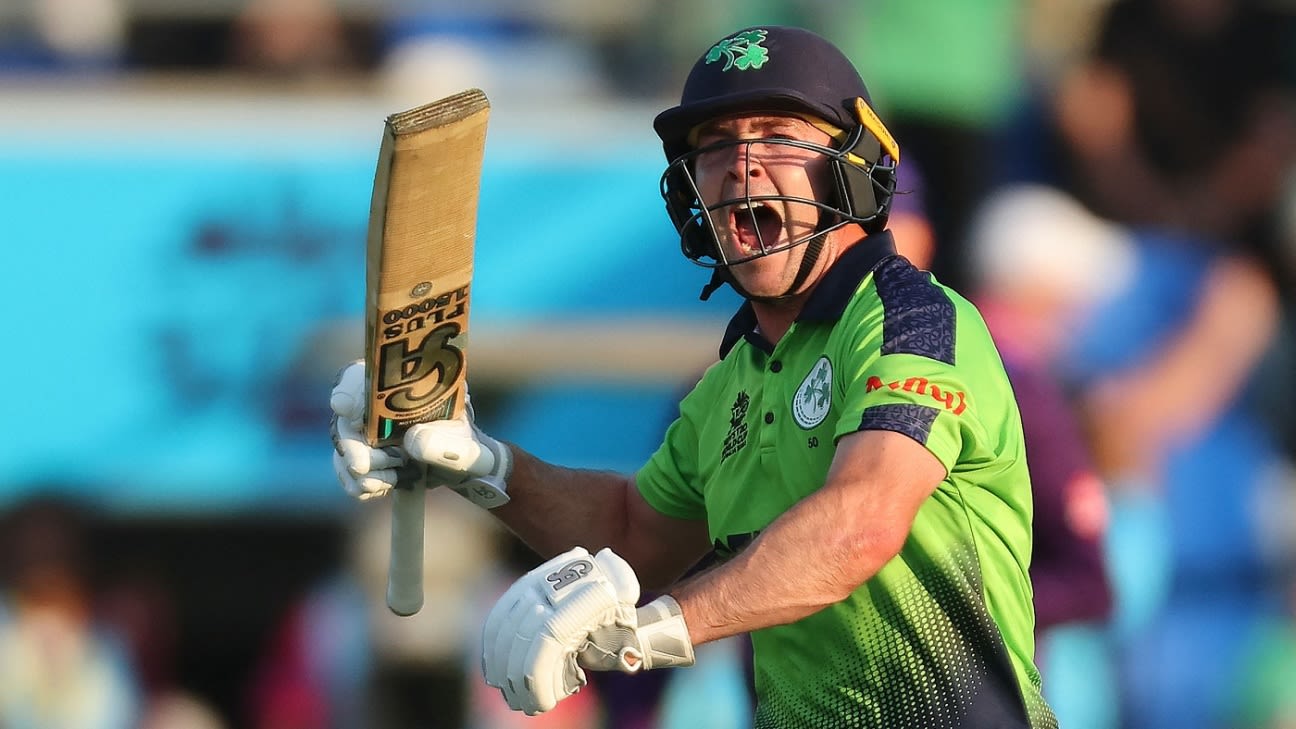 Ireland 180 for 4 (Campher 72*, Dockrell 39*, Leask 1-16) beat Scotland 176 for 5 (Jones 86, Berrington 37, Campher 2-9)
When Curtis Campher and George Dockrell linked up in the chase of 177 against Scotland, Ireland were 61 for 4 in 9.3 overs. At the time, ESPNcricinfo’s Forecaster gave Ireland a less than 10% chance of victory, but the duo overcame formidable odds to produce a come-from-behind win and keep alive their chances of qualifying for the Super 12 round.
At one stage, victory had seemed so unimaginable that when Campher hit the winning runs with one over to spare, there were tears of joy among the few Ireland fans at Bellerive Oval in Hobart. An emotional Campher, who had scored a heroic 72, also seemed on the verge of tears while talking to the broadcaster.
While Campher was the undisputed star of the chase with an innings that came at a strike rate of 225, he was abl supported by Dockrell’s unbeaten 27-ball 39. Their partnership of 119 off 57 balls – the highest of the tournament thus far – thwarted Scotland’s effort of 176 for 5 that was achieved after Michael Jones hammered a 55-ball 86, the competition’s highest individual score so far.
Ireland’s win opened up Group B, with all four teams in contention to qualify for the Super 12 round.
A partnership to remember
Paul Stirling and Andy Balbirnie impressed briefly at the start of the chase but both batters fell inside the powerplay. The Scottish spinners then came into play, removing Lorcan Tucker (20) and Harry Tector (14) just as they were on the verge of changing gears. At the drinks break, Ireland had two new batters in Campher and Dockrell and they needed 116 runs off 63 deliveries.
Curtis Campher and George Duckell shared a crucial century stand•ICC via Getty Images
The duo paced the chase to perfection, with at least one boundary in every over from the 11th until the finish. The tide began to change in the 13th over when Scotland’s in-form spinner Mark Watt was taken for 18 runs, with Campher slog-sweeping him for six. From there on, Campher maintained the pressure, using the width of the crease to toy with the field. Offspinner Michael Leask was scooped over short fine leg in the 14th over; Brad Wheal was deposited over cow corner for six in the 15th, which yielded 14 runs; and the 16th from Josh Davey cost 17 runs, with both Dockrell and Campher clattering three boundaries in the space of five balls.
Campher and Dockrell played only two dot balls between overs 12 and 16. They took the fielders on as the field placement turned more defensive as the partnership blossomed. With four overs to go, Campher and Dockrell brought down the required runs to 36. Pressure firmly on Scotland now, Ireland picked off 23 runs in the next two overs to turn their once-distant dream of victory into a reality. The final touches were applied by Campher, the Player of the Match, with a hat-trick of fours in the penultimate over.
Scotland ride on Jones’ 86
After Scotland chose to bat, George Munsey was trapped lbw by a swinging delivery from Mark Adair in the second over. The other opener Michael Jones struggled for fluency, scoring only 11 off his first 15 balls.
The No. 3 Matthew Cross, however, looked in sublime touch. Relying on his fast hands, Cross raced to 20 off only 13 balls, and eventually Jones seemed to find his form too. The boost came after the powerplay, when Jones pulled Barry McCarthy for six over the short square-leg boundary. Thereafter, Jones’ range of strokes kept growing even after Cross fell for 28 to Campher
His most productive regions were cover and midwicket. He used his feet against spinners Simi Singh and Dockrell to go inside out for fours to enter the 30s. Jones then dispatched Josh Little for six by spotting a short ball early and rocking back deep in his crease. He reached his maiden T20I fifty off 38 balls with a single through covers in the 14th over. For a moment, it appeared that Jones’ innings would end on 50, but he successfully overturned an lbw decision that was given out originally by umpire Kumar Dharmasena.
With five overs to go, Scotland were 122 for 2, and with wickets in hand, a big push was expected. The acceleration began when Jones clubbed Gareth Delany for six and four in the 16th over. Berrington fell for 37 to Campher, trying to start the 17th on a positive note, and Jones survived a dropped chance in the same over when Delany put him down at long leg.
After the reprieve, McCarthy offered Jones a high full toss, and the no-ball was pulled for a big six. He then clubbed Little for four down the ground to reach 84, surpassing Sikandar Raza’s 82 as the highest individual score so far in this T20 World Cup. Jones fell on 86 two balls later, when he holed out to long-on after attempting a helicopter-style shot that was a mix between MS Dhoni and Rashid Khan’s methods. When he fell, Scotland were already on 170.
They finished on 176 eventually, a winning total on most days after the kind of start Scotland’s bowlers had in the second innings. But it wasn’t enough after Campher’s counterattack, which meant that the first seven matches in the tournament had been won by the team that lost the toss.
Tags: Curtis Campher, George Dockrell, ICC Men's T20 World Cup, Ireland, Michael Jones, Scotland, Scotland vs Ireland