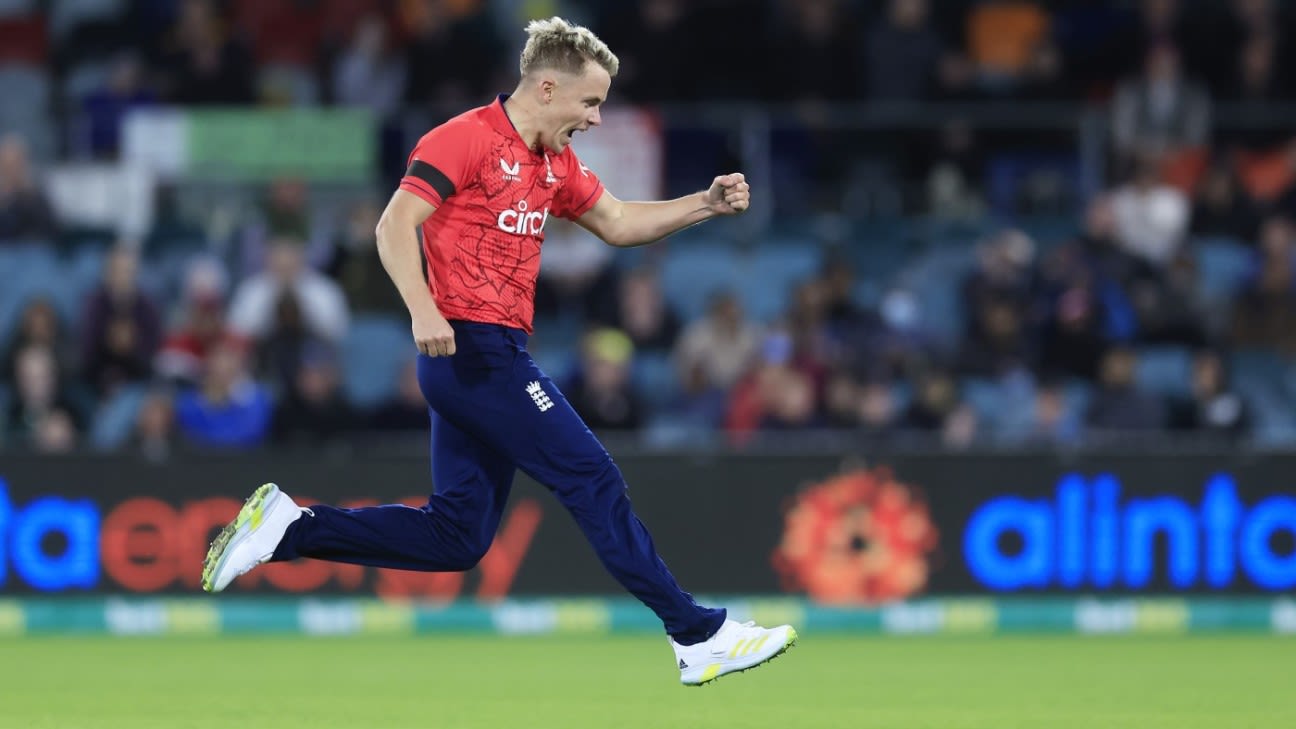 Momentum is loosely aligned to confidence, but it’s a broadly nonsensical concept in professional sport – after all, if you’ve allowed yourself to live by it, presumably you’ll be obliged to die by it too. Sure, winning is all very well, but sometimes knowing where you went wrong is every bit as important. Take Aaron Finch’s blunt post-match comments in Canberra, where he pinpointed Australia’s “sloppy” fielding for the eight-run defeat that left them 2-0 down going into what is now Friday’s dead-rubber against England.

Who knows where that momentum would be headed now, had Australia’s butter-fingers not offered up three clear-cut chances in the midst of Dawid Malan’s and Moeen Ali’s crucial 92-run stand for the fifth wicket. Or if Tim David hadn’t walked across Sam Curran’s leg-stump yorker with the game at his mercy in the 18th over of the chase.
So with just over a week to go until the start of their respective T20 World Cup campaigns, here we are – with England’s rebooted white-ball team now boasting back-to-back away series wins after a blank home summer, and Australia seemingly in a scramble for their own readiness after a pair of untimely setbacks.
Related
And yet, as the Aussies know all too well from their own exploits in the UAE 12 months ago, history is bunk, especially in the T20 format. On that occasion they went into the World Cup with a troubling litany of setbacks stretching back five series and 18 months, through losses to England, India, New Zealand, West Indies and Bangladesh – and even then they got panned by eight wickets, and with 50 balls to spare, by a Jos Buttler masterclass in the group stages in Dubai. What happened thereafter, however, rather scotched any notion of prep.
Certainly the team that Australia put out for the Canberra defeat was not far from the side that they would wish to take into their opening fixture against New Zealand on October 22. Ideally they’d like Glenn Maxwell to find a semblance of form, and for their big-three seamers – Mitchell Starc, Pat Cummins and Josh Hazlewood – to prove a touch more incisive than their collective analyses of 2 for 110 in 12 overs, but there’s not a lot that they would seek to improve personnel-wise, even after this latest loss.
It is England, by contrast, who still have a few key decisions to nail down. In particular, the Ben Stokes question, which looms over every aspect of their build-up. He’s scraped together a grand total of 17 runs from 20 balls across two innings, and his dismissal on Wednesday – a wild heave at Adam Zampa in a match situation that probably afforded him time to build into his innings – did little to dispel the swirling doubts about his role.
But then, up he popped with an economical display in a rare new-ball role, followed by a first-ball breakthrough at the start of his second over, and by the time he’d pulled off the evening’s most startling feat of athleticism – a stunning one-handed boundary-save at long-off – his thirst for the action was once again self-evident. If finding a place for a man like Stokes is your major concern … well, it’s the proverbial “good problem to have”, isn’t it?

Glenn Maxwell walks off after another low score•Getty Images

So, momentum eh… what does Glenn Maxwell make of that phenomenon? He barely played a shot in anger at the last T20 World Cup – at least, not until the final, when his unbeaten 28 from 18 balls powered Australia over the finishing line against New Zealand, after he had contributed a grand total of two boundaries to their previous six tournament fixtures. Such are the reasons to believe he’ll be alright on the night this time around too, even though his slump in the past few months has been every bit as eye catching. He’s managed 51 runs in 61 balls since the start of June, and a gruesome 16 from 33 in the past month – in which his 8 from 11 against England on Wednesday was his highest, joint-longest and fastest-paced knock in six attempts. As Stokes might attest, No. 4 can be a tough berth to nail in this format, but unless Steven Smith gets a final chance to find his own form, Maxi’s pedigree may yet be trusted to tough this one out.
Twelve months ago, Sam Curran was sitting in the Sky Sports studio, watching his team-mates pursue glory without him while he nursed a stress fracture in his back – an injury that was still hanging over him at the start of the English season when he was limited to 10 overs in his first three Championship matches of Surrey’s season. Now, with a love of the limelight that he has previously displayed for Chennai Super Kings in the IPL, Curran has pounced on an opportunity to be England’s missing link in the middle order – a bowler with deceptive versatility who has sent down 31 of his 32 available overs in Pakistan and Australia this winter, for a world-class haul of 12 wickets at 19.33 and an economy rate of 7.48. His left-arm line has always been a challenge, particularly his deceptively steep bouncer, but Curran seems to have added extra pace since his injury – his game-changing yorker to Tim David was timed at 137kph. His batting hasn’t yet fired, but the threat he poses is undeniable, and his place in that first-choice XI is surely now indisputable.

The XI played on Wednesday was widely considered Australia’s starting side for the World Cup. They may give them another run, but also there’s a chance they will rotate again. Although he passed his concussion test, David Warner may be given the night off after his heavy landing near the boundary on Wednesday. Kane Richardson could be worth another outing before the real thing starts – his cutters may suit a somewhat sticky Canberra surface – Josh Inglis has not played since the India tour and there remains some uncertainty over the status of Ashton Agar.

Australia (probable) 1 David Warner, 2 Aaron Finch (capt), 3 Mitchell Marsh, 4 Glenn Maxwell, 5 Marcus Stoinis, 6 Tim David, 7 Matthew Wade (wk), 8 Pat Cummins, 9 Mitchell Starc, 10 Adam Zampa, 11 Josh Hazlewood/Kane Richardson
Chris Jordan lost his central contract earlier this week, and – whisper it – maybe he’s close to losing his banker status as England’s go-to death bowler. Curran’s death overs in recent weeks have been exceptional, as have Reece Topley’s, while Chris Woakes – who is likely to get another warm-up outing here – offers a wise head at the crunch too. With Mark Wood also itching for another trot before the main event, it will be instructive to see if Jordan gets another chance to find his form on Friday, as he battles back from his long-term hand injury. On the batting front, Liam Livingstone must be nearing full fitness after his ankle injury, and while England originally earmarked this week’s Pakistan match as his comeback game, there may be a temptation to test-drive him sooner, especially with Stokes not yet firing, and with the series already in the bag.
England (probable) 1 Jos Buttler (capt & wk), 2 Alex Hales, 3 Dawid Malan, 4 Ben Stokes, 5 Harry Brook, 6 Moeen Ali, 7 Sam Curran, 8 Chris Woakes, 9 Chris Jordan, 10 David Willey, 11 Adil Rashid.

The surface wasn’t a road for the opening game with free-flowing strokeplay not easy from the outset. It made the quality of Malan’s innings stand out and also David’s striking. The weather forecast isn’t promising with heavy rain set to sweep through the capital, although there remains some hope that it will clear through in time for the game. There shouldn’t be problems with drainage.

“We are probably ready to go, I think. Maybe just in a holding pattern now for another two games. Sort of feels that way in the camp. We know our game pretty well in Australia.”
Josh Hazlewood on the long build-up to the World Cup
“When the big games come, he’ll score runs and that’s what you want from your gun players. Ben offers so much even if he’s not scoring runs: he opened the bowling [in the second T20I] and bowled really well and he was brilliant in the field.”
Moeen Ali has no worries about Stokes’ form
Tags: Australia, Australia vs England, England, England in Australia, Glenn Maxwell, Sam Curran