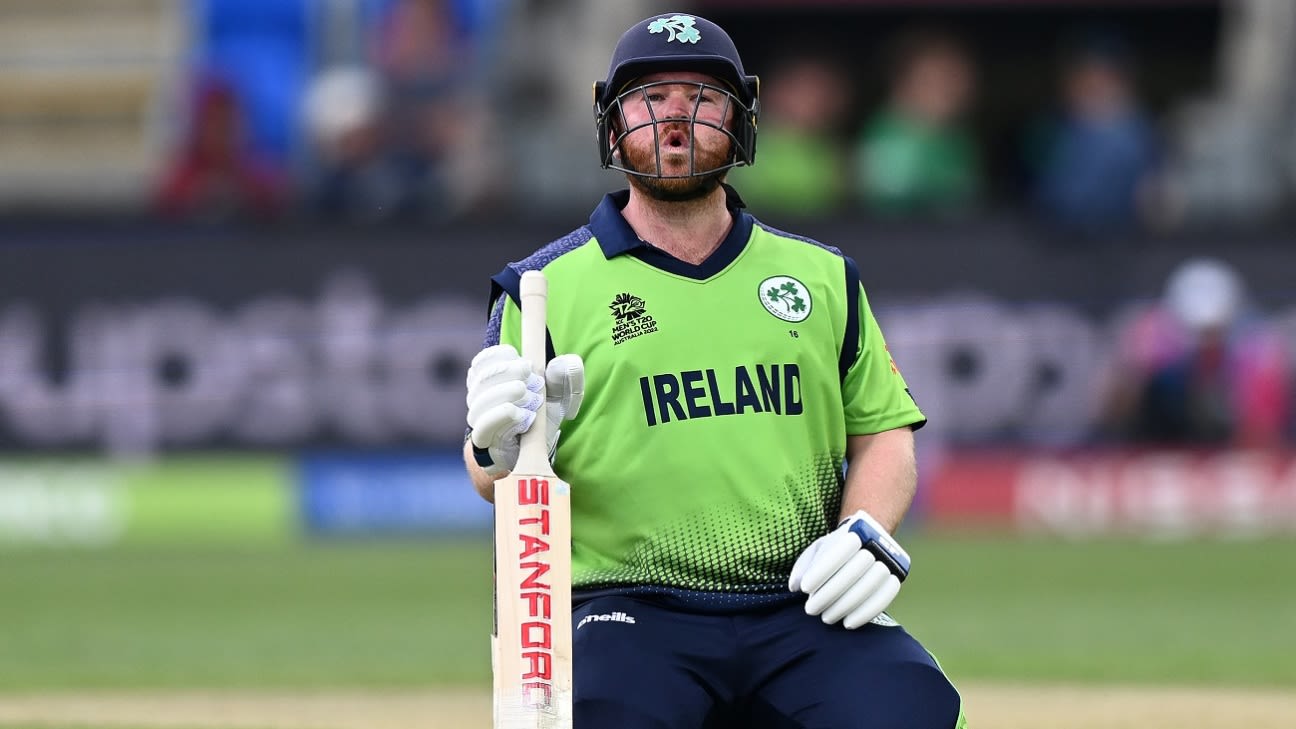 Ireland 150 for 1 (Stirling 66*, Tucker 47*) beat West Indies 146 for 5 (King 62*, Delany 3-16) by nine wickets
In Hobart, where it was supposed to rain all day, Ireland celebrated one of their most crucial victories in T20 cricket, storming into the Super-12 round of the 2022 Men’s T20 World Cup and dumping two-time champions West Indies out of the tournament.
Legspinner Gareth Delany and opening batter Paul Stirling were the heroes of Ireland’s stirring performance, full of confidence and bristling energy. After restricting West Indies to 146 for 5, a potentially nervy chase in a knockout game turned into a cruise as Ireland sprinted to the target in the 18th over, not giving their opponents a whiff of a chance.
When Lorcan Tucker stepped out to loft Obed McCoy inside-out over extra cover to score the winning runs, the Ireland fans who had turned up in large numbers broke into trademark song and dance as they waved the Irish flag proudly in blustery Bellerive. It was only the second time that Ireland had qualified for the second round of a T20 World Cup, after the 2009 tournament in England.
West Indies’ early struggle
West Indies started poorly, losing Kyle Mayers and Johnson Charles to big shots inside the powerplay. It could have been worse had offspinner Simi Singh clung on to a sharp return chance to dismiss Brandon King for one in the fifth over.
Brandon King dug in to consolidate West Indies’ innings•AFP/Getty Images
As the innings progressed it was increasingly clear that some deliveries, especially when dug in, held up a touch more than others and the batters had to recalibrate their approach. It wasn’t until the eight over that West Indies began to get going, when King crashed two boundaries square of the wicket as medium pacer Curtis Campher erred in length.
After meandering at a run-a-ball, West Indies slowly regained a bit of momentum. Just as they were beginning to threaten, Delany broke a 44-run stand when he dismissed a struggling Ewin Lewis for the first of his three wickets. At 71 for 3 in the 11th over, Ireland were wresting control again.
King fights, Delany strikes
King missed the Zimbabwe game due to an illness but he showed no signs of rust as he seamlessly switched into hitting mode. Right from the moment he lunged out to drill an extra-cover drive to the boundary off the first ball, he meant business.
King played the field perfectly, targeting the short boundaries and nudging into gaps to keep turning the strike over, not allowing the bowlers to settle. For a while, with King and Nicholas Pooran around, there was a possibility of a West Indies recovery but Delany’s dismissal of the captain – Pooran reached out and hit one straight to sweeper cover – ended those hopes.
Gareth Delany swerved the game away with skill and guile•AFP/Getty Images
In his third over, Delany deceived big-hitting Rovman Powell in the air and off the pitch. In trying to fetch a slog sweep from outside off, towards the longer boundary, he was out to deep midwicket in an over that went for just one. Delany finished with 3 for 16 off four overs, with West Indies struggling at 112 for 5 after 17 overs.
King and Odean Smith eventually gave West Indies a late lift, even though there was a sense that they were at least 20 short of a competitive total.
The Stirling-Balbirnie blitz
When Ireland came out to chase, their approach was evident. Stirling kept attacking the spin of Akeal Hosein with ferocious sweeps, while Andy Balbirnie took advantage of Pooran’s punt of bowling Odean Smith – and not Jason Holder – in the powerplay.
Andy Balbirnie and Paul Stirling set up Ireland’s chase with a 73-run stand at the top•AFP/Getty Images
Smith’s record in this phase – an economy of 11.18 in 11 overs for just three wickets – was far from encouraging, and the Ireland captain hit him for 4,6,4 off his first three deliveries. McCoy’s slower variations proved expensive as well, and before West Indies knew what had hit them, Ireland had raced to 64 without loss in the first six overs.
Farewell West Indies
When Hosein had Balbirnie caught at point for a 34-ball 37 in the eighth over, there was a ray of hope for West Indies. They didn’t concede a boundary between overs 7.5 and 10.2 – the only time when they appeared to have any semblance of control.
Stirling broke free by carting Alzarri Joseph over the grass banks at deep midwicket and brought up his half-century off just 32 balls when he slashed Smith for four behind point in the 12th over. By now, West Indies were running on fumes.
Smith had Lorcan Tucker caught and bowled in the same over, only to find out he had overstepped. It summed up West Indies’ day, as the prospect of an early departure from Australia became a reality.
Tags: Andy Balbirnie, Brandon King, Gareth Delany, ICC Men's T20 World Cup, Ireland, Paul Stirling, West Indies, West Indies vs Ireland