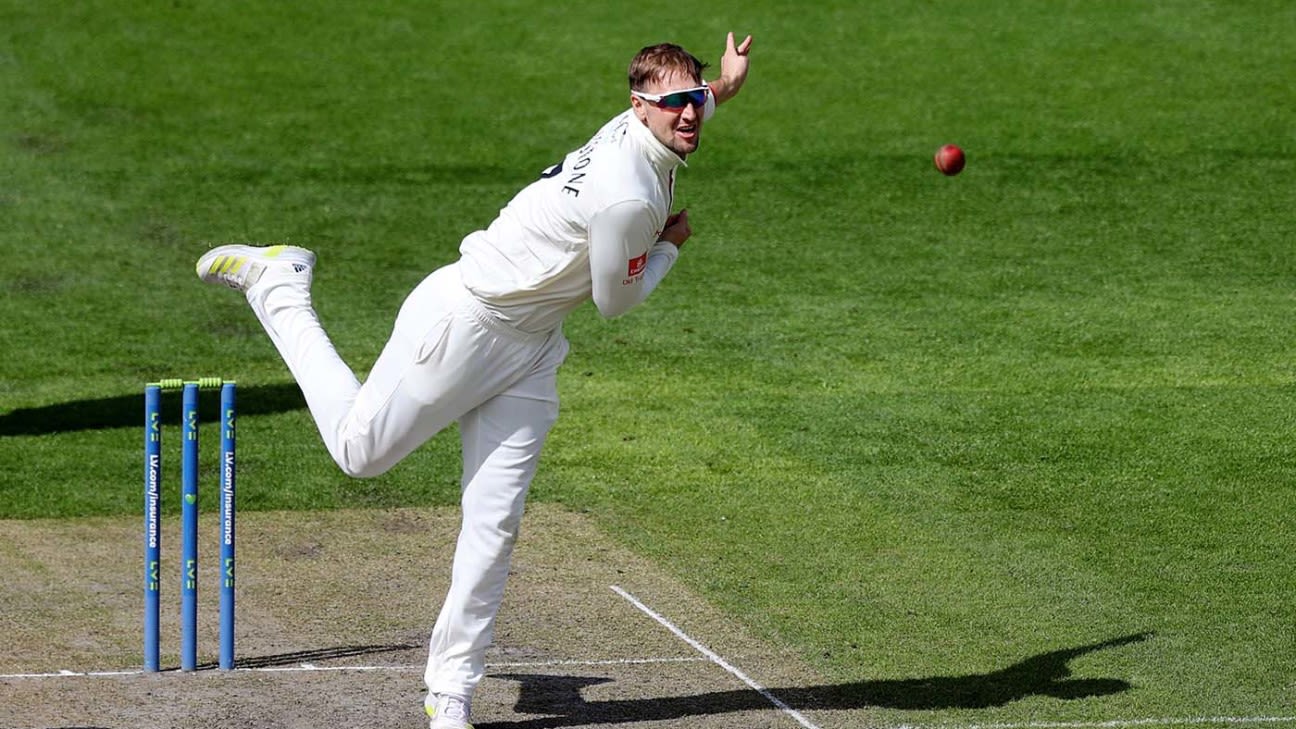 Liam Livingstone and Will Jacks are in contention to make their Test debuts after being included in England’s 15-man squad for their tour to Pakistan as spin-bowling allrounders.
Alex Lees and Matthew Potts have become the first players dropped under England’s new regime, led by Brendon McCullum and Ben Stokes, while Stuart Broad misses the tour on paternity leave.
Keaton Jennings and Ben Duckett are competing for the vacancy at the top of the order alongside Zak Crawley, recalled to the Test set-up after absences of three-and-a-half and six years respectively, on the back of strong County Championship seasons.
Related
Livingstone’s inclusion is the most eye-catching in the squad and comes the day after he was awarded his first central contract by the ECB. He was the spare batter during England’s tour to New Zealand in early 2018 but has not been involved in the Test set-up since and has played less and less red-ball cricket since his breakthrough as a T20 player.
He has scored 114 first-class runs since the start of 2020, spread across nine innings, the most recent of them in August 2021. But he has often reiterated his desire to play Test cricket and his ability to spin the ball both ways, bowling both legspin and offspin, has opened up an opportunity.
Jack Leach will be England’s only frontline spinner on the tour with Jacks, Surrey’s offspinning allrounder, the other part-time option alongside Livingstone. Rehan Ahmed, the Leicestershire legspinner, is expected to be part of the Lions squad that will play a warm-up match against the Test team in Abu Dhabi in late November and could travel to Pakistan as a net bowler.
ESPNcricinfo Ltd
Lees will also be in contention for the Lions squad but, after being a notable omission from England’s list of central contracts, he has now lost his place in the Test team too, despite playing in all seven games this summer. He has shown glimpses of his ability in international cricket, and bought into the positive approach favoured by Stokes and McCullum – particularly during the 378-run chase against India at Edgbaston – but has managed only two half-centuries and an average of 23.84 across 19 innings for England.
Jennings, who last played for England in February 2019, is the early front-runner to open alongside Crawley. He was the leading run-scorer in Division One of the County Championship for Lancashire this season, scoring five hundreds and averaging 72.52, and has a strong track record in Asia.
Duckett is also back in the fold after a strong year for Nottinghamshire and impressed in Pakistan last month, finishing England’s T20I series as their second-highest run-scorer. Along with Ollie Pope, he will also provide wicketkeeping cover for Ben Foakes. Harry Brook is set for further opportunities after making his Test debut against South Africa at The Oval last month, with Jonny Bairstow sidelined by his ankle injury.
England have picked four frontline seamers in their squad, with Mark Wood returning to the Test fold for the first time since the tour to West Indies in March after missing the home summer following elbow surgery. James Anderson will return to Pakistan after being an unused squad member on England’s last Test tour there in 2005, while Jamie Overton and Ollie Robinson are the other fast bowlers.
Alex Lees has been dropped by England•AFP/Getty Images
Potts is a surprise omission from the squad after making a bright start to his international career against New Zealand, but his returns tailed off against India and South Africa, culminating in him losing his place when Robinson was declared fully fit. Sam Curran, Olly Stone and Chris Woakes have all been overlooked.
The ECB are in the process of recruiting a new, full-time selector but Rob Key, England’s managing director, picked this squad along with McCullum and Stokes, with inputs from the ECB’s talent ID department. The Lions squad is due to be announced next week.
Key worked on the most recent Test series staged in Pakistan – Australia’s 1-0 win in March – as a broadcaster. “The selectors have picked a squad for the conditions we can expect in Pakistan,” he said. “There is a strong blend of youth and experience and players who will adapt well to the types of pitches we are likely to get across the three-match series.
“We are looking forward to touring Pakistan as a Test team for the first time since 2005,” Key added. “It will be a historic tour and a compelling series against a good side. I wish the players every success, especially those new to the squad and those returning after a period of time away.”
England are due to arrive in Abu Dhabi on November 18 and will play a three-day warm-up match against the Lions from November 23-25. They will fly to Pakistan on November 26 and play Tests at Rawalpindi (December 1-5), Multan (December 9-13) and Karachi (December 17-21).
England squad: Ben Stokes (capt), James Anderson, Harry Brook, Zak Crawley, Ben Duckett, Ben Foakes (wk), Will Jacks, Keaton Jennings, Jack Leach, Liam Livingstone, Jamie Overton, Ollie Pope, Ollie Robinson, Joe Root, Mark Wood
Tags: Alex Lees, Ben Duckett, England, England in Pakistan, England in United Arab Emirates, England Lions in United Arab Emirates, Jamie Overton, Keaton Jennings, Liam Livingstone, Mark Wood, Matthew Potts, Pakistan, Rehan Ahmed, Stuart Broad, Will Jacks