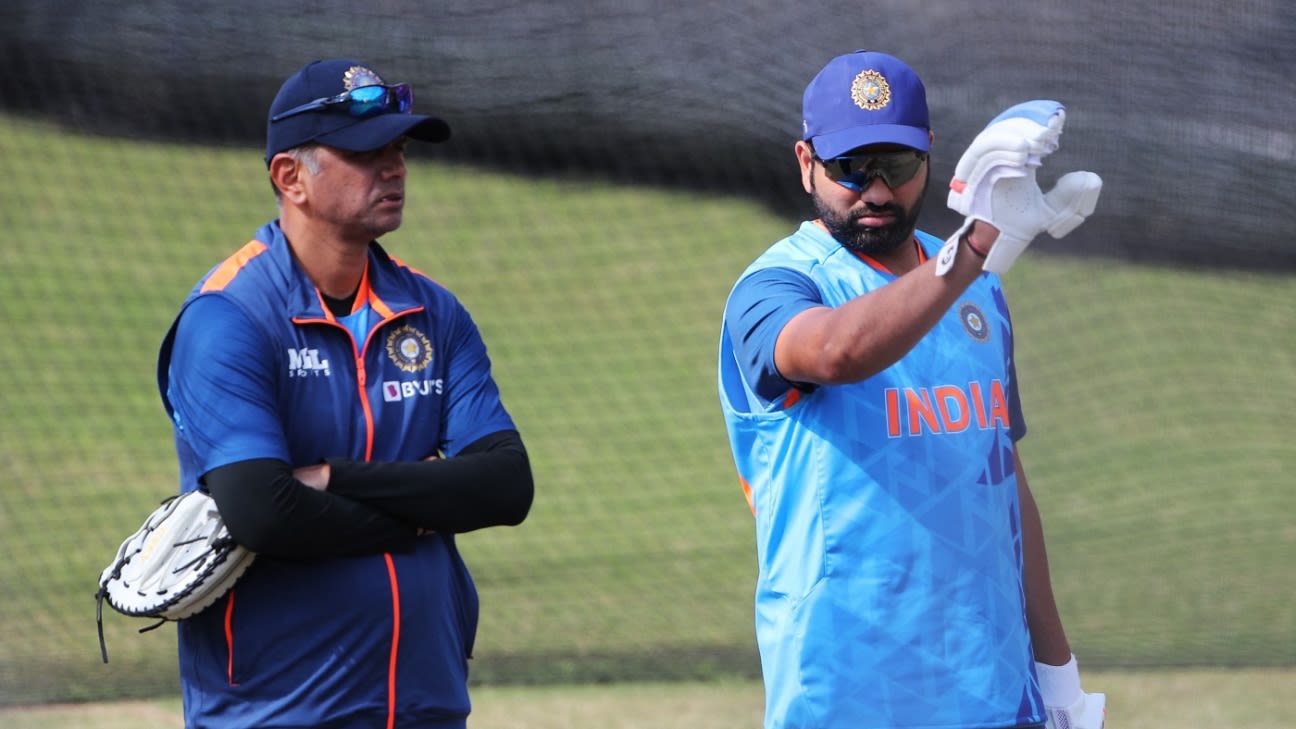 India have often started Men’s T20 World Cups with little or no preparation or acclimatisation to the conditions, but this time they left for Australia about 20 days before their first match. And it is important too, because securing progress to the semi-finals often turns out to be a tri-series within each group between the three top teams – as it happened last year. And when you play one of the big teams – Pakistan – first up, you need to hit the ground running.
“That’s something we’ve been talking about for a while, like when you go on big tours, you need to prepare well, especially when you travel outside India,” India’s captain Rohit Sharma said on the eve of the match against Pakistan. “You need to have time in hand to prepare the way you want to prepare, because it takes time.
Related
“A lot of the guys are not used to playing in foreign conditions, be it Australia, South Africa, England, New Zealand, and all those countries. It’s always nice to have time in hand, and this was a conscious effort from the team management, the BCCI, that come the big tournament, we want to have time in hand to prepare ourselves. The talk of having time in hand started right after the last World Cup.
“We said, we know where the World Cup is happening, and we made a very conscious decision of going to Australia a little earlier than expected because we were supposed to play the [ODI] series against South Africa, which unfortunately we all had to miss to prepare for this big event. That is something that was happening in the background right after the [2021] World Cup. We know how key the preparation is. A lot of the guys who are part of this team have not been to Australia, so that was also one of the reasons we wanted to come here early.”
Rohit spoke a little about what the preparations entailed. “We had a great time in Perth,” he said. “We were there for nine days, and then we came to Brisbane. We prepared, we played a couple of practice games in Perth just to get used to the conditions, the pitches. Obviously you can’t travel all around Australia and play on all pitches, but we could get whatever we could get.
Rohit Sharma with head coach Rahul Dravid during India’s training session•Getty Images
“I thought Perth was the right time [zone] for us to start. Obviously, the time difference is not too much, also, so you can easily get acclimatised to the time zone, and that was also one of the reasons. I thought the way we went about the entire Perth leg was good for us. We could specifically focus on certain things when it comes to batting, and the bowlers could work on certain things … and we were lucky enough to get that time in hand to prepare ourselves and come here to Melbourne.”
Rohit comes with the reputation of being a meticulous captain who prepares well, knows his match-ups and hardly ever makes an unplanned move. However, he spoke of the need for instinct too, because a lot of data of T20s in Australia is from their summer and not early spring.
“You’ve got to be instinctive as well,” Rohit said. “Sometimes you just have that feeling that this is the guy who will do the job for you. Yes, you have to look at the match-ups as well. We’ve been going through a lot of numbers all these days about how people have been successful in Australia. Although it’s a different time, not a lot of cricket has been played during this month in Australia, it was important for us to get some kind of data around what happens in October-November in Australia and what are the kind of people who have been successful here [then].
“We saw a lot of things about how you need to be successful firstly as a team and then as an individual, as well. We went through all of it, but obviously, like I said, it’s a bit of both. Sometimes you just feel that this guy is bowling pretty well, you need to just get him to play the game; he’s in good form.
“On the other side, you will look at the match-ups, as well. It’s a bit of both. On that given day, whatever we feel is the right playing XI, we will go by that. I certainly want to keep my mind open on that when it comes to playing XI. We don’t want to get stuck with one particular way of making your playing XI. We want to be open about it. If we have to change one or two players in every game, we’ve got to be ready for it.
“That’s how we have prepared all our guys as well. The message was given long before we came here, that if we need to change one or two players for the match-ups for what sort of conditions we are playing in, guys will be ready for it. So it’s not a last-minute thing where we are changing the players. This is the talk that has happened in the team long [time] back, and guys are ready for it.”
Rohit was asked if this was the biggest match of his career, seeing as he was leading the team against arch-rivals Pakistan in a World Cup match. He didn’t agree with the assessment because he has played a T20 World Cup final against Pakistan and won it, and has played a Champions Trophy final and lost it. He laughed off some war parallels. And quickly went back to cricket: that they knew they needed to change the way they played, the players needed to be given the security to go out and play that way, and that they as ready as they can be in Jasprit Bumrah’s absence.
Tags: ICC Men's T20 World Cup, India, Pakistan vs India, Rohit Sharma