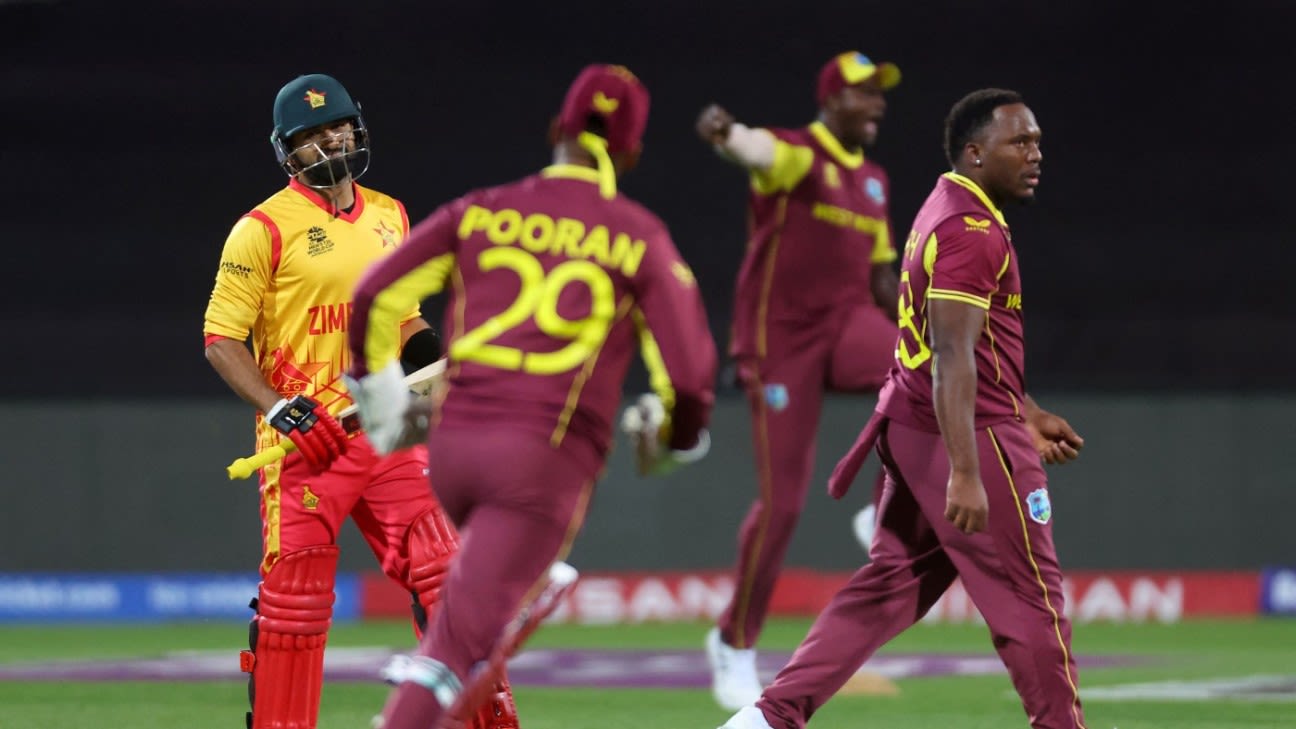 Zimbabwe batter Sean Williams admitted his side might have taken their aggressive approach a touch too far in their defeat to West Indies, saying there is a difference between being encouraged to play your shots and “being reckless”.
At 48 for 2 after five overs, Zimbabwe were well-placed to chase down West Indies’ 153, with the asking rate around seven. But rather than playing the situation, Zimbabwe continued to go hell for leather against the West Indies fast bowlers and kept losing wickets. The last nine wickets fell for 75 runs as West Indies sealed a comfortable 31-run win.
“Having a positive approach is the way we want to play,” Williams said. “We have had quite a few victories by playing that way. If we want to play competitive T20 cricket, we would rather be bowled out for 70 than take it deep. But on the wickets side, we lost too many quite early even though the asking rate was in the sevens. It was going to be very difficult with a non-batter on one side. There were lots of lessons to be learned, even if it’s not nice to lose.
“I 100% agree we don’t always need to go ultra-aggressive. But we still want to have that positive mental approach, because T20 is one of those games where a bad ball can get you out and a good ball can go for six.”
It is an approach Dave Houghton, Zimbabwe’s coach since June, has actively encouraged, and it’s difficult to argue with the results. Zimbabwe eased to the T20 World Cup qualification without losing a game in the Qualifiers tournament in July, before beating Bangladesh in T20I and ODI series, and winning an ODI against Australia in Australia for the first time in their history. That was a remarkable turnaround, both in terms of results and approach, from an attritional brand of cricket they played under Houghton’s predecessor Lalchand Rajput, one that culminated in chastening home series losses against Namibia and Afghanistan.
Against that backdrop, Luke Jongwe was willing to write off Wednesday’s batting performance as just a bad game at a bad time. “We didn’t really change much,” he said. “We just tried doing what we were doing in previous games. It’s just one of those days where it didn’t click. We just needed a good partnership of 50-60 runs to get us home but we didn’t do that today.
“It was one of those games where when [Sikandar] Raza was out we needed sevens or eights [per over]. We could have gone about it in a better way, but our coach has been telling us to play positive cricket, and it just didn’t come through today. Dave has been trying to make us play our best cricket rather than being in our shells. It just didn’t work today.”
Wednesday’s defeat, though, makes Zimbabwe’s final group game against Scotland on Friday a must-win. But if that game is washed out – there’s a forecast of rain that evening, when the game is scheduled – a completed game in the afternoon between West Indies and Ireland will knock Zimbabwe out of the tournament. After a remarkable turnaround over the past few months, it would be a cruel way to exit.
Tags: ICC Men's T20 World Cup, Luke Jongwe, Sean Williams, West Indies vs Zimbabwe, Zimbabwe