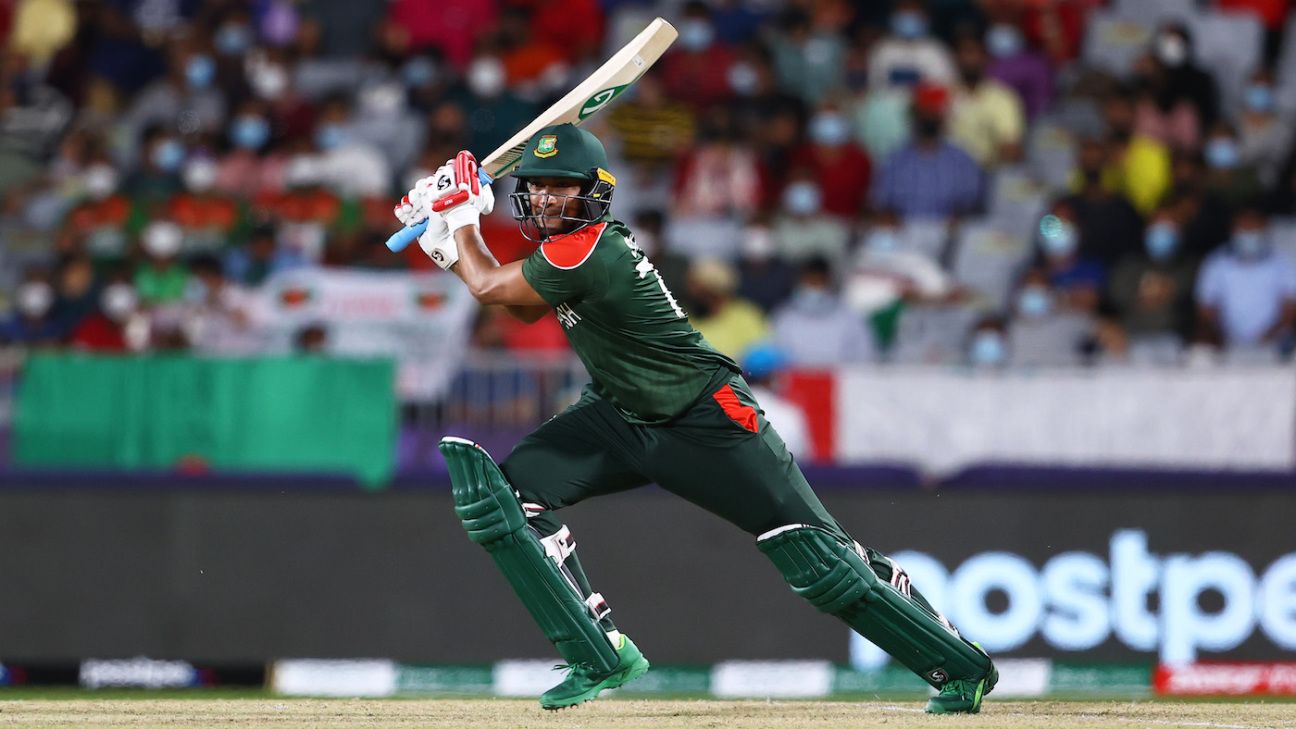 New Zealand 142 for 2 (Conway 70*, Mahmud 1-26) beat Bangladesh 137 for 8 (Shanto 33, Bracewell 2-14, Boult 2-25, Sodhi 2-31) by eight wickets
New Zealand opened their account in the tri-series with an eight-wicket win over Bangladesh in Christchurch. Their spinners Ish Sodhi and Michael Bracewell turned the screws in the middle overs before Devon Conway and the captain Kane Williamson put on a match-winning 85-run stand for the second wicket.
Conway was undefeated on 70 off 51 balls when New Zealand strolled home in the 18th over, with Glenn Phillips finishing things off with consecutive sixes. The winning shot, hit over long-on, struck a fan sitting on the grass bank in front of the Hadlee Stand, prompting Phillips to run over to check up on her. New Zealand Cricket later said of the incident: “The young girl was struck by the ball just above the eye. She is lucid and has been assessed by doctors at the ground. She will now go to hospital for further checks.”
Sodhi, the legspinner, and Bracewell, the part-time offie, had set the tone for the win after New Zealand elected to bowl first, putting the brakes on Bangladesh and claiming four wickets between them. Sodhi became only the third bowler from New Zealand – behind Tim Southee and Sophie Devine – to 100 T20I wickets along the way, and Trent Boult (2 for 25) too, was at his miserly best.
Adam Milne’s fitness will be of concern to New Zealand, with the pacer bowling only two overs before going off with an abdominal muscle niggle; he was playing his first competitive match since March this year due to an Achilles tendon strain. They have already lost Lockie Ferguson and Daryl Mitchell to injury this series, two weeks out from the T20 World Cup.
Trial by spin for Bangladesh
Bangladesh perhaps left even New Zealand surprised when they succumbed to spin after a decent start against pace. Bracewell broke up a half-century stand with his third ball, and the visitors slipped from the comfort of 53 for 1 to 78 for 5 in the space of six overs.
Bracewell had Litton Das caught and bowled for 15, deceiving him with a subtle change of pace, before Najmul Hossain Shanto holed out to long-off off Sodhi to give him wicket No. 100. Shanto had showed a bit of fight with 33 in his first outing since August; his selection had sparked widespread criticism back home in the last few weeks.
Sodhi and Bracewell then got rid of Mosaddek Hossain and Yasir Ali cheaply, as Bangladesh’s good start gave away to a middle-order collapse. The spin duo finished with 4 for 45 from their combined eight overs.
Hosts clumsy in the field
The home side however had a sloppy evening in the field. They missed a spate of clear – and mostly simple – chances, some of them drawing smiles from the fielders.
First, Bracewell missed a catch at cover against Mehidy Hasan Miraz, having had sighting issues due to the setting sun. In the next over, James Neesham dropped Litton’s soft push towards cover-point, before substitute fielder Martin Guptill missed the stumps at the striker’s end with Litton and Shanto involved in a mix-up.
Later, Milne dropped Afif Hossain on eight, another sitter at the deep-fine boundary. There was also a chance against Nurul Hasan in the final over when Conway got his gloves in the way of what could’ve been a direct hit and failed to collect the ball with the batter short of his ground. Nurul would go on to hit another boundary, his unbeaten 25 off 12 lifting Bangladesh to a respectable 137 for 8.
Conway drives the chase
Bangladesh removed Finn Allen in the fourth over when the opener hit a pull shot straight down Shanto’s throat at deep square leg.
Conway however didn’t allow the Bangladesh bowlers to take charge, hitting timely boundaries, while Williamson rotated the strike at the other end. Conway especially went about attacking Shakib Al Hasan – back in the side after visa issues kept him out of the first game – in his first two overs, which went for 18. Given the small target, the second-wicket pair could afford to play out balls when needed, before Conway inevitably found the boundary. He struck two consecutive fours off Taskin Ahmed in the 13th over, leaving New Zealand needing just a touch above a run a ball from there. Williamson and Conway hit one more four each in the following two overs, so that when the captain was out chipping Taskin to mid-on, they needed just 29 runs from 30.
That wicket had come all too late for Bangladesh, who remain without a point after two outings in the tri-series, the only team winless after two games each for all three sides.
Tags: Bangladesh, Devon Conway, Ish Sodhi, Michael Bracewell, New Zealand, New Zealand T20I Tri-Series, New Zealand vs Bangladesh