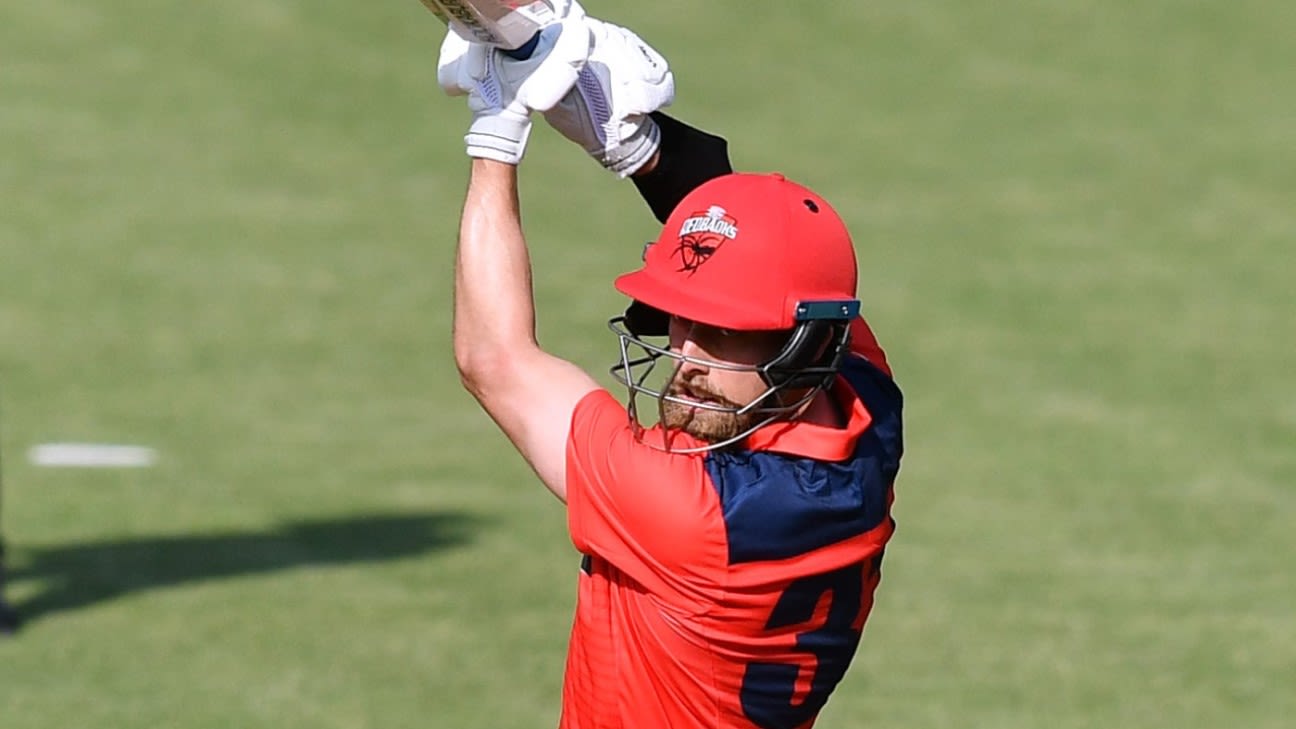 Nathan McSweeney chose the perfect time to hit a career-best score with a perfectly weighted run-chase alongside Jake Lehmann to deliver South Australia a four-wicket win over one-day Cup leaders Tasmania in Adelaide.
South Australia struggled for fluency early in their innings but reached 6-255 to pass Tasmania’s 5-252 with 14 balls to spare.
McSweeney was dismissed for 75 with victory in sight having added 126 for the fifth wicket with Lehmann. McSweeney’s previous best was 53 in seven outings.
Lehmann’s 78 not out guided the Redbacks home after the home side had slipped to 4 for 110.
Having recorded a hefty eight-wicket win over South Australia just three weeks ago, Tasmania would have harboured high hope of a third win in as many starts to open the season.
Jake Doran’s unbeaten 105 looked set to deliver that win on a relatively challenging Adelaide Oval pitch, which saw South Australia elect to bowl first.
Doran had managed a best of just 36 not out in his 21-match seven-year Marsh Cup career but picked up a deserved ton in a 128-ball innings.
Batting at No.3, Doran entered the fray in the fourth over and, in a judicious knock, reached three figures in the penultimate over.
In reply, South Australia had several batters make starts in the first half of their innings.
Test pair Travis Head and Alex Carey looked dangerous before falling for 27 and 37 respectively, with the latter’s dismissal leaving the home side at a precarious 4-110.
Tasmania’s innings resembled South Australia’s with Doran ensuring his side overcame a rocky start.
With invaluable assistance from Beau Webster, who crashed 65 off 57 balls, the pair put on 117 for the fifth wicket.
Tasmania’s two stars from their one-sided win over the same opponent in late September were back in the pavilion soon after the commencement.
Wes Agar produced a world-class inswinger to hit the middle stump of Ben McDermott (7).
Fellow opener Caleb Jewell (13) then spooned a simple catch to the infield from spinner Ben Manenti’s very first ball leaving the visitors at 2-34.
Part-time wicketkeeper Doran steadied the ship with a breakthrough 50-over knock to add to three Shield centuries.
Tags: Jake Doran, Jake Lehmann, Nathan McSweeney, South Australia, Tasmania, Tasmania vs South Aust, The Marsh Cup