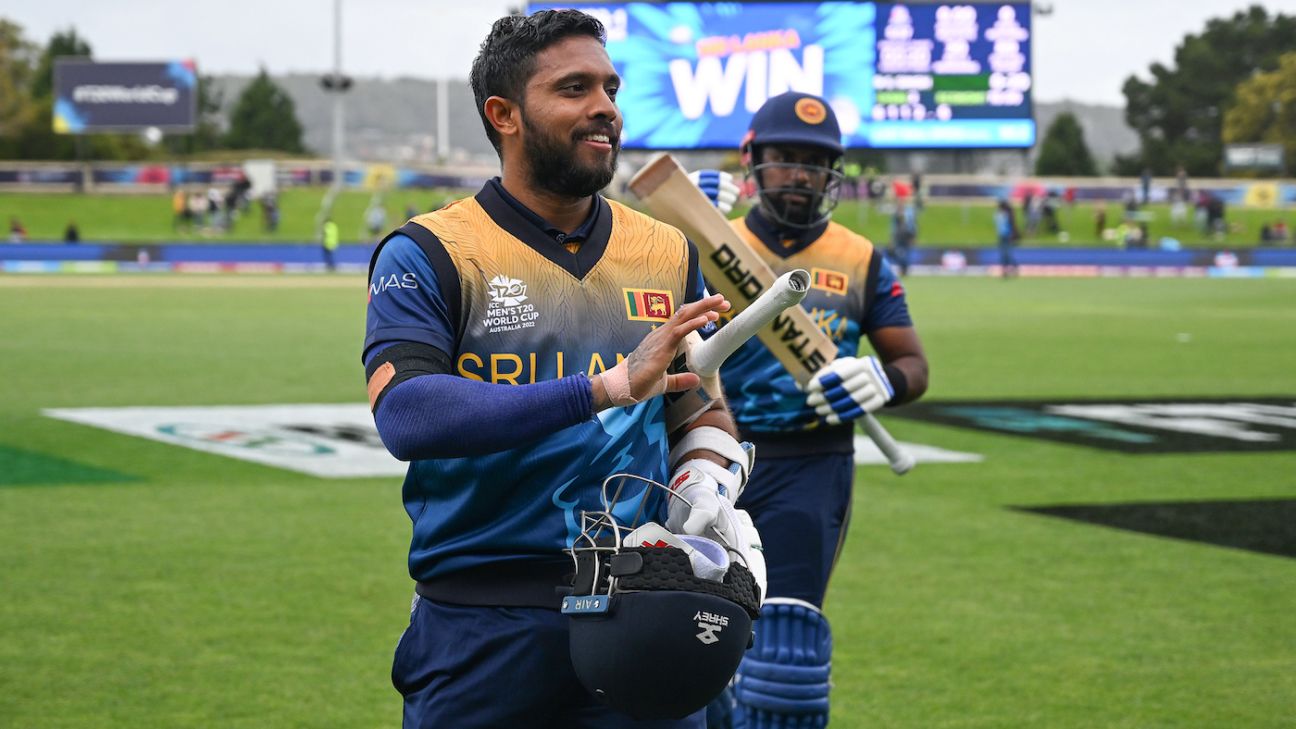 Sri Lanka 133 for 1 (Mendis 68*, Asalanka 31*) beat Ireland 128 for 8 (Tector 45, Theekshana 2-19, Hasaranga 2-25) by nine wickets
Sri Lanka’s bowlers choked the Ireland batting performance, their spinners taking five wickets between them, as they restricted the opposition to 128 for 8.
The target was a stroll for the top order led again by Kusal Mendis, who hit 68 not out off 43 balls. He hit his third six to take Sri Lanka home at the end of the 15th over, which means Sri Lanka not only take the two points from this game but also see their net run rate soar to 2.467.
Ireland may reflect that they were utterly outplayed, having chosen to bat first (their wins in the previous round had come while chasing).
Opener Paul Stirling made a promising 34 off 25, but was out with the score on 55, and no other batter could reliably find the boundary, often perishing in their attempts to hit out. Harry Tector top-scored with 45, but used up 42 balls. On a Hobart track that was decent for batting, their total never seemed sufficient.
Sri Lanka’s quicks control the powerplay
Although Lahiru Kumara and Binura Fernando are Sri Lanka’s fourth and fifth-choice quicks, they combined nicely in the powerplay – Fernando getting good bounce from a hard pitch, while Kumara troubled Ireland with his pace.
Kumara took the wicket of Andy Balbirnie first ball, when the batter tried to scoop him over the shoulder, but Kumara rattled the stumps instead. Fernando didn’t get a wicket, but conceded only 12 from his first two overs, mixing up his pace and lengths cannily. Chamika Karunaratne did leak 14 runs off his first over, but even with that, Ireland were 40 for 2 at the end of the powerplay.
Spinners strike through the middle
Maheesh Theekshana had claimed a wicket even inside the powerplay, and Ireland’s batters found him very difficult to get away when the field went back. Theekshana leaked only a single boundary from his four overs, which went for just 19. He’d dismissed Lorcan Tucker in his first over, then removed George Dockrell in his last – the 17th of the innings.
Maheesh Theekshana fires up the archer celebration•AFP/Getty Images
Wanindu Hasaranga gave away 25 runs, conceding a six. But he was no less dominant, using a new round-arm delivery to particularly good effect, before taking two wickets in the 19th over.
Dhananjaya de Silva bowled only two overs, but claimed the vital wicket of Stirling, who holed out to deep cover where Bhanuka Rajapaksa took an excellent catch on the move.
Mendis races through the innings
It took four balls for Mendis to find his first boundary and his pace rarely let up from there, as Sri Lanka sped to 50 for no loss at the end of the powerplay – de Silva making 28 of those runs. De Silva was out in the ninth over, the score on 63, but Mendis set about establishing a busy partnership with Charith Asalanka, who didn’t hit a boundary off the first 19 balls he faced, but scored at more than a run-a-ball, while Mendis played more attackingly at the other end.
The pair sped up as Sri Lanka approached the target, Mendis hitting two legside sixes in the 15th over. Their partnership brought 70 runs off 40 balls.
Tags: ICC Men's T20 World Cup, Ireland, Ireland vs Sri Lanka, Kusal Mendis, Sri Lanka