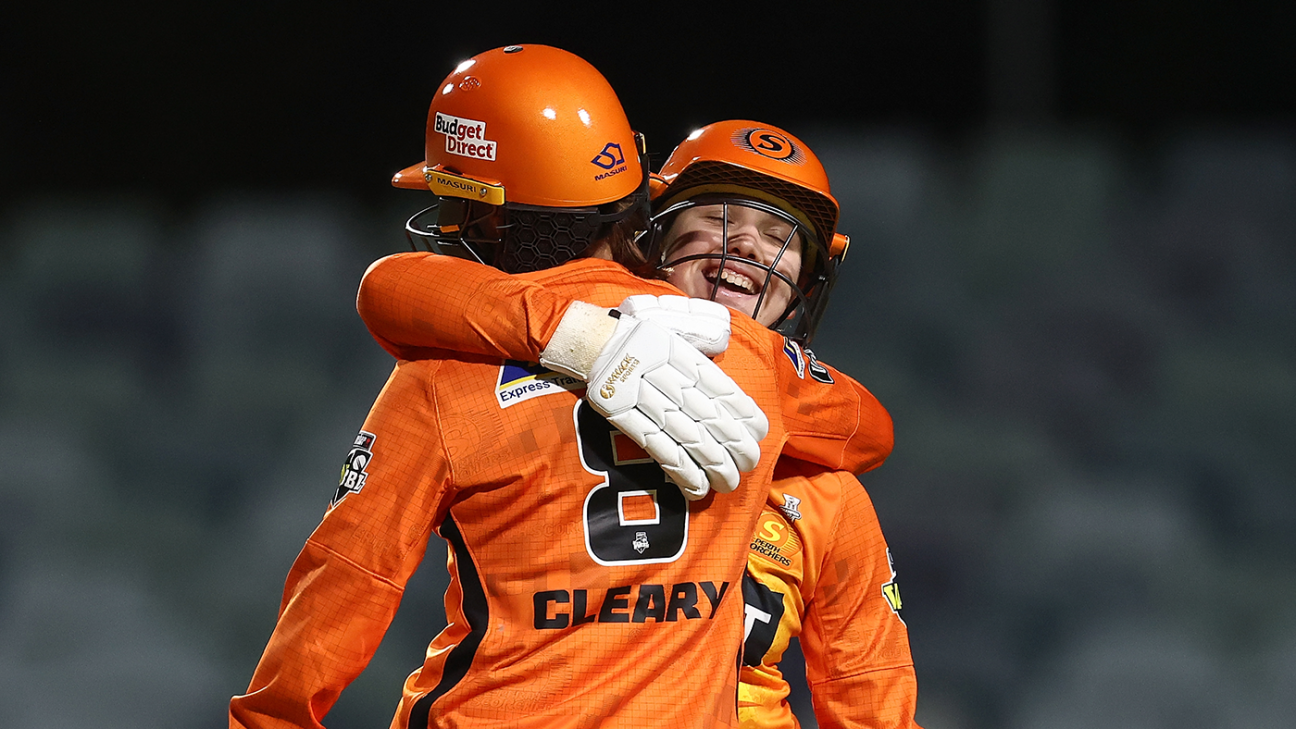 Perth Scorchers 8 for 111 (Mooney 35) beat Melbourne Stars 9 for 109 (Flintoff 40) by two wickets
Perth Scorchers maintained their unbeaten start to the WBBL season with a topsy-turvy two-wicket win over the Melbourne Stars at the WACA Ground.
In reply to Stars’ meagre 9 for 110, Scorchers were in all sorts of trouble at 7 for 74 in the 16th over.
Needing 37 off the last 27 balls and with their best batters already back in the shed, Amy Edgar (21 off 21 balls) and Piepa Cleary (13no off 11 balls) stepped up to the plate to guide the Scorchers over the line with just two balls remaining.
The result improved Scorchers’ record to 3-0 in a perfect start to their title defence, while the Stars are 0-3 and face a huge challenge to claw their way back into the finals mix.
Stars appeared on track for victory after dismissing Sophie Devine for a duck and ending the resistance of Beth Mooney.
But the game was turned on its head when the Scorchers peeled off 26 runs off the two-over Power Surge in the 16th and 17th overs, with Edgar crucial during the counter attack.
Stars were in danger of failing to surpass the WBBL’s lowest ever total of 66 after slumping to 7 for 55 in the 12th over.
Some late heroics from Tess Flintoff ensured the Stars made it past triple figures, giving them a chance of posting an unlikely victory.
Cleary and Lilly Mills caused plenty of damage with the ball for Scorchers, while Taneale Peschel was superb early before copping some late punishment from Flintoff.
Peschel set the tone from the very first ball, catching the edge of Lauren Winfield-Hill to send the opener packing for a golden duck.
Chloe Piparo dropped Alice Capsey at slip next ball to deny Peschel a chance at a hat-trick.
She had her second wicket two overs later, though, when Jemimah Rodrigues tickled one behind. Annabel Sutherland put up some resistance, before Flintoff’s late blows.
Tags: Amy Edgar, Beth Mooney, Melbourne Stars Women, Perth Scorchers Women, Piepa Cleary, Stars Wmn vs Scorchers, Taneale Peschel, Tess Flintoff, WBBL