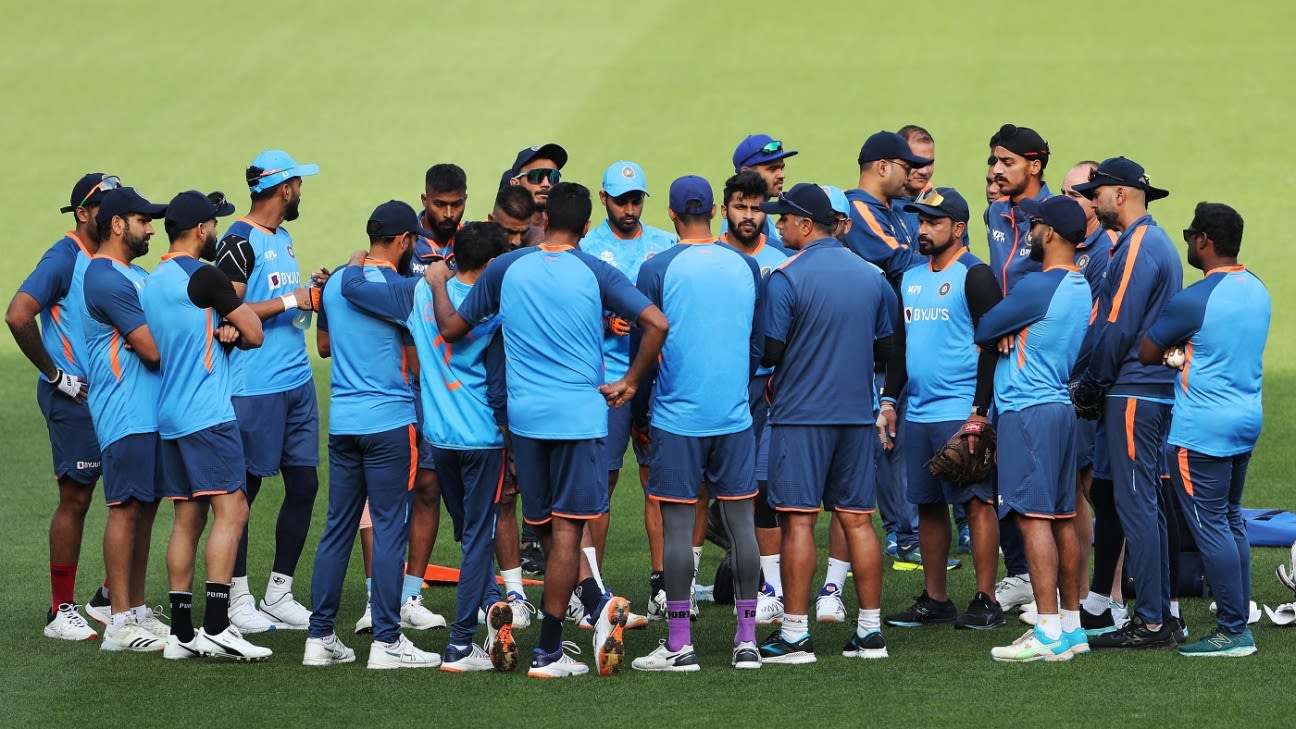 It would appear the fickle Melbourne weather doesn’t want to be seen as the spoilsport. The dismal weather outlook has improved a lot on the day before the big match between India and Pakistan on Sunday. On the eve of the match, Pakistan’s training was interrupted by early-morning rain, but India practised in dry conditions in the afternoon. Pakistan later did fielding practice under the lights at night.
After an early prediction of 95% chance of rain and about 20mm precipitation on Sunday evening, the Bureau of Meteorology upgraded the forecast on Saturday evening to 70% chance of rain, and only two to five mm of it. The only concern, though, is that any rain on the day is expected in the evening, which is when the match is scheduled.
Related
“I’ve been hearing about Melbourne weather for a while now, and it keeps changing,” Rohit Sharma said in his pre-match press conference. “In the morning when I woke up, a lot of the buildings, when I opened my hotel curtains, were in clouds, and now we certainly see the sunshine.
“You don’t really know what is going to happen tomorrow. The things that are in our control, we’ll try and control that, which is we’ll have a good training session today, go back, relax ourselves and get ready for tomorrow. As simple as that. We need to come here thinking that it’s a 40-over game. We will be ready for that.
“If the situation demands that it’s a shorter game, we will be ready for that, as well. A lot of the guys have played such kinds of games before, and they know how to manage themselves in a situation like that where you are getting ready for a 40-over game, and then suddenly it’s a 20-over game, or five overs each.
“Luckily, we played one game in India against Australia which was an eight-over game. I think in terms of where the guys stand, I don’t think it’s going to make much of a difference, but we just certainly need to come here very well prepared and thinking that it’s going to be a 40-over game.”
Pakistan captain Babar Azam also said they are hoping for a full game on Sunday. “Weather is not in our hands,” he said. “As players, we would love to play and play a full game. A lot of people are waiting for this match. We want it to be a 40-over match, but whatever happens we are prepared for it.”
India’s training session was attended by hundreds of fans, with Indian and Pakistani supporters indulging in loud banter. It was just a precursor of what to expect on Sunday evening.
Tags: ICC Men's T20 World Cup, India, Pakistan, Pakistan vs India, Rohit Sharma