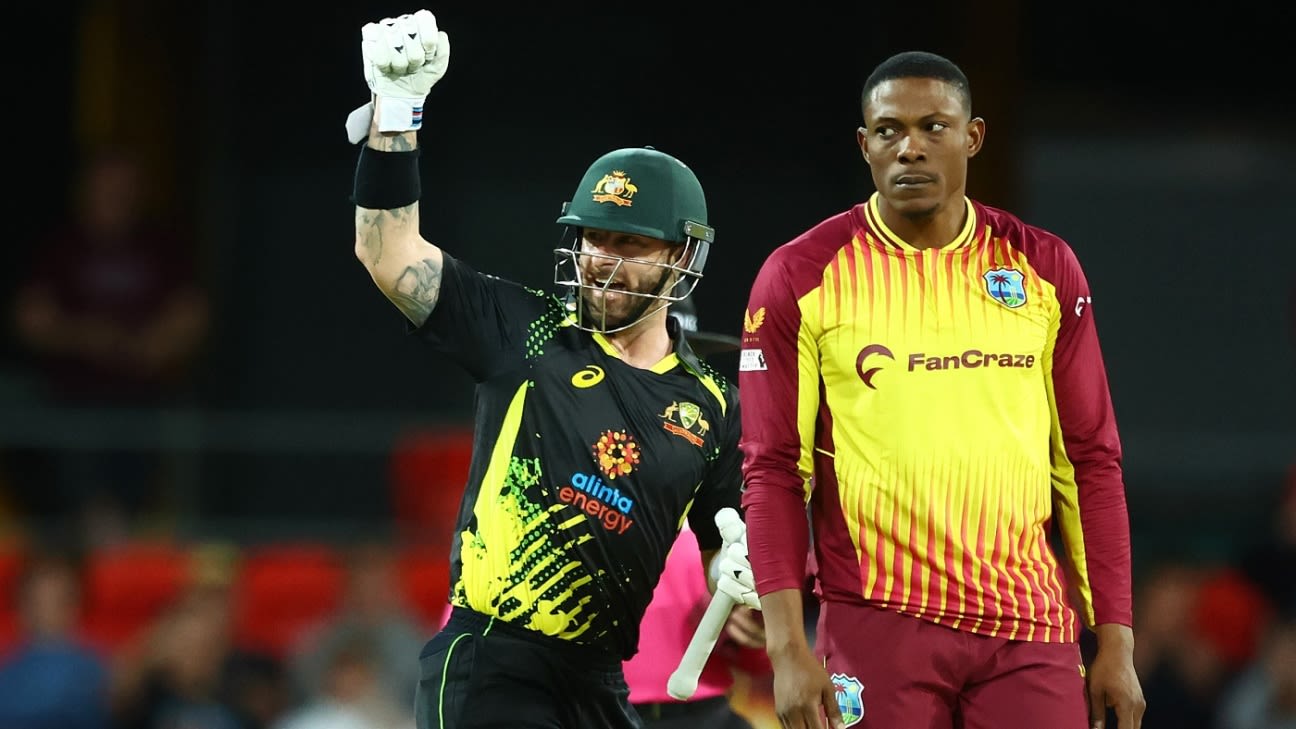 Australia 146 for 7 (Finch 58, Wade 39*) beat West Indies 145 for 9 (Mayers 39, Hazlewood 3-35) by three wickets
Matthew Wade continued his golden run as Australia’s finisher and Aaron Finch, batting at No. 4 for the first time in his international career, scored a welcome half-century to nurse Australia to an untidy three-wicket win with a ball to spare on the Gold Coast.
In a rather chaotic finish, it came down to Australia needing 11 off the final over from Sheldon Cottrell. Wade swung the first ball for four but West Indies had a chance when he was dropped in the deep by Raymon Reifer next delivery. Mitchell Starc, too, was missed two balls later before scampering back for the winning runs off the penultimate delivery and almost having a nasty collision with wicketkeeper Johnson Charles.
Quite how much there is to read into Finch’s positional switch which enabled Cameron Green, who isn’t part of the World Cup squad to stay as opener, remains to be seen, but his performance followed the encouraging signs from the India tour. Even amid the horror run that ended his ODI career, Finch’s T20 form had not taken the same hit but having a captain in the runs would remove one issue heading into the World Cup.
Given that seven of West Indies’ squad had been in Australia barely 24 hours, some rustiness could be forgiven. There were times when they were on top and to take it to the final over, and be in a position to snatch the game, can give them heart. Some of the six-hitting was breathtaking, Yannic Cariah had a very encouraging debut with 1 for 15 from four overs and Alzarri Joseph was a handful with his slippery pace.
Mayers’ wow moment
It’s early in the Australian season, but you’ll do well to see a better shot than the one Kyle Mayers produced in the fourth over against Green. Against a short delivery, he drove it magnificently off the back foot, more than 100 metres into the stand over deep point. It was an astonishing show of power and timing. It quickly went viral. He had shown intent from the start of the innings with early boundaries off Starc and Josh Hazlewood but, as was the case with West Indies’ whole batting display, the momentum was lost after the powerplay.
Kyle Mayers played a great shot over the off side•Getty Images
The non-review and the review
Brandon King was the leading run-scorer in the CPL and played one lovely stroke, lofting Adam Zampa over long-off, but was left ruing not taking a review when he was given lbw against Hazlewood. The appeal looked good live, but replays showed the bounce in the pitch had it going over the stumps. When the DRS was called for the 11th over, it had what appeared a curious moment when the ball tracking showed that a very full delivery from Starc which speared into Nicholas Pooran’s pad and looked to be sliding down was, in fact, taking out leg stump.
Boundaries dry up
Alongside Mayers’ memorable effort, there was no shortage of well-struck sixes from West Indies, not least Odean Smith’s monster effort the 19th over. However, in what is not a new talking point about their batting, the skill of working the ball around in the middle of the innings was lacking. They made 53 in the powerplay and 50 in the last five, which meant just 42 runs came in the other nine overs. The six overs between Zampa and Glenn Maxwell cost just 29 and included one boundary, which was the powerplay six by King off Zampa. There was a 54-ball period after the fielding restrictions without a boundary before Jason Holder cleared the ropes. On the larger grounds in Australia it feels like an area that will have to improve, regardless of how long they hit the ball.
Do we need to talk about Maxwell?

Australia were intent on going hard from the start of the chase. Cottrell found the edges of David Warner and Mitchell Marsh in the second over but they were cantering along at 10s. Either side of the powerplay the wheels nearly came off. Green gave himself room once too often, Maxwell swiped high into the off side and Tim David picked out deep square leg. Maxwell’s dismissal continued a lean patch: since the start of the Zimbabwe ODI series, albeit a different format, he has a top score of 32 in nine innings. In T20Is his last six innings read: 19, 16, 1, 0, 6, 0. His value as a bowler in the set-up is as high as ever, and he’s the type of player who can flick the switch at any moment, but it is something to keep an eye on.
Wade there again
When Wade came in Australia were wobbling at 58 for 5 and he joined Finch as the last pair of frontline batters. Since taking on the middle-order role for the last World Cup he has enjoyed phenomenal success: in 12 innings he has made 310 runs, being dismissed just three times, with a strike-rate of 160.10. This time, back-to-back boundaries off Cottrell in the 12th over, which cost 18 runs, brought the requirement close to a run-a-ball. After Finch fell he struggled to get the strike – facing just six of the last 17 balls – but it didn’t cost Australia.
Tags: Aaron Finch, Alzarri Joseph, Australia, Australia vs West Indies, Kyle Mayers, Matthew Wade, Sheldon Cottrell, West Indies, West Indies in Australia, Yannic Cariah