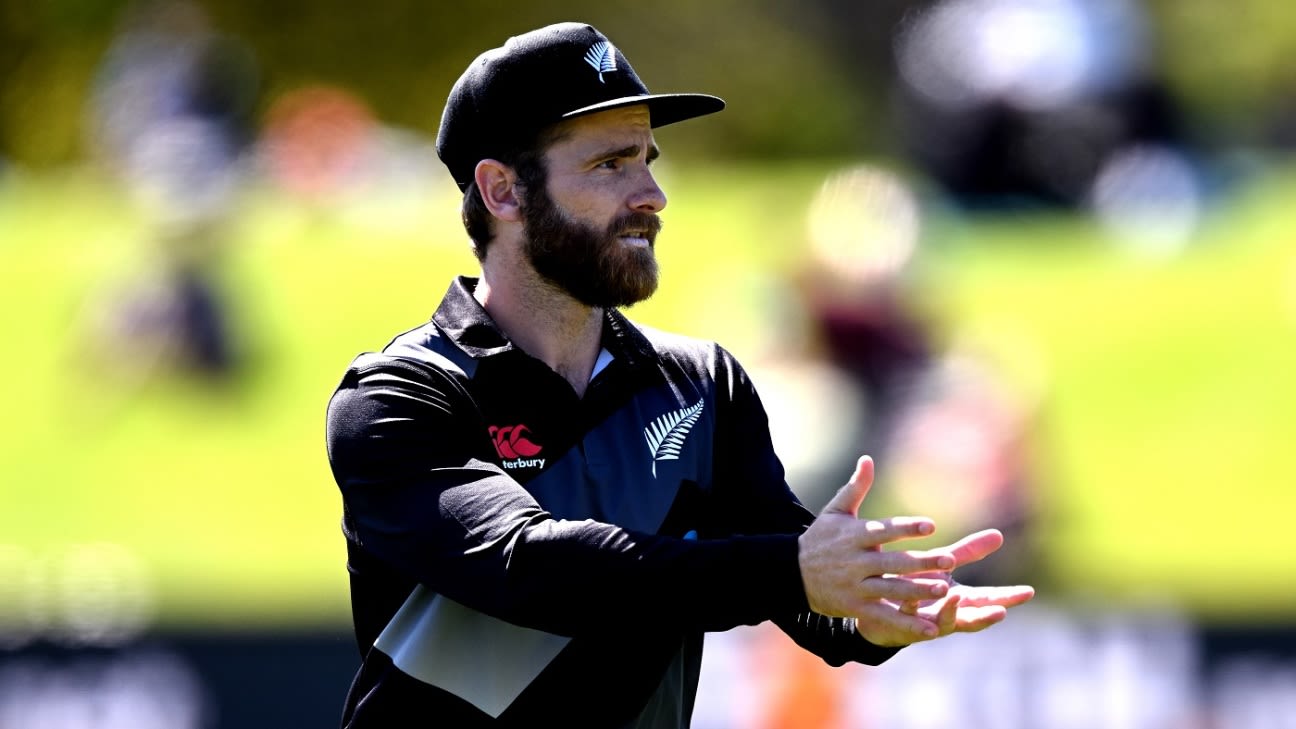 When New Zealand came across the Tasman in late March 2015 for the ODI World Cup final they could not have been a more confident team, after surging through the tournament unbeaten on home soil, dreaming of the chance to topple their fellow hosts at the MCG to claim the title.
However, as history shows, they were overwhelmed on that day by seven wickets. The moment Brendon McCullum charged and missed at Mitchell Starc in the first over was clearly huge, but it is often forgotten New Zealand had recovered to 150 for 3 before the major collapse set in.
Related
That defeat marked the beginning of a winless stretch in Australia that is now at 15 matches across formats following the recent 3-0 ODI series loss in Cairns and talk of psychological hurdles to overcome. Their last win in the country was in 2011, the Test match in Hobart where Trent Boult made his international debut, so it has been more than a decade since tasting success here. That record, at least, should end at some point over the next couple of weeks.
But the fixture list has brought New Zealand and Australia back together, this time at the beginning of a global event, in a rematch of last year’s final in the UAE where Australia were again able to overpower their neighbours despite a magnificent innings from Kane Williamson.
Williamson, as you would expect, was not taking any bait with regards New Zealand’s record in Australia. “We haven’t thought too much about that,” he said. “Nice to play against Australia first up, and it should be a good game.
“They know the conditions well. They’re very clinical at home and in most places that they play, which is a reflection of where they stand in the game. So there is that respect. We know that we have a number of match-winners throughout, and the team’s looking forward to the [competition]. We’ve had a number of good clashes [with Australia] over the years and a number of good series as well, and I guess most recently probably the last World Cup.”
Boult and Williamson are among four New Zealand players who appeared in the 2015 final who could feature at the SCG on Saturday (Australia are likely to have five) although the other two, Tim Southee and Martin Guptill, are not certain selections. If Guptill doesn’t make the starting XI it adds to the sense that there is a slow changing of the guard in the New Zealand side.
The fortunes of Boult and Williamson, meanwhile, are also part of a wider theme about this New Zealand side and whether they have passed the peak that made them the form team in the world little more than a year ago.

“We haven’t thought too much about that. Nice to play against Australia first up, and it should be a good game.”
Kane Williamson is not reading too much into New Zealand’s Australia hoodoo

Boult’s future has nothing to do with form. He remains one of the finest left-arm quicks in the world and in those recent ODIs in Cairns was magnificent. But he has now walked away from his New Zealand Cricket contract and, while he is part of this event, what happens next is less certain. He has spoken of reaching next year’s ODI World Cup, but there is a difficult path to navigate.
For Williamson the questions have been fitness and workload. Since that stunning innings in last year’s final he has spent considerable time sidelined with an elbow injury. When he returned, fluency was hard to come by, but there were promising signs in the recent tri-series final against Pakistan where he made 59 off 38 – his highest strike rate in a double-figure T20 innings since that knock against Australia in Dubai.
“It was nice to spend some time in the middle,” he said. “It would have been nice to get on the right side of the result as a team. For me, it’s just continuing to try to improve and add value where I can, and try and make as big a contribution as I can to the team and my role.”
However, over the last 12 months or so there have started to be regular questions asked about whether he is the right person to carry on as captain in all three formats. You would think that a successful tournament in Australia would put the ball firmly in his court as to whatever decisions he wants to make.
Their lead-in to the opening match has not been ideal since arriving in Australia. They were bundled out for 98 by South Africa in their first warm-up match in Brisbane and the second, against India, was washed out. Their one training in Sydney was then impacted by the weather, although they did manage a brief spell outside. They are also selecting from 14 for the opening game at least, with Daryl Mitchell still recovering from his broken finger.
“Preparation is always varied regardless of what happens, even if it’s perfectly planned,” Williamson said. “It was nice to get those [tri-series] games in back home, some really competitive cricket, and then nice to be over here in Australia and get into some preparation. It is a balance between doing more and trying to make sure guys are fresh, and I suppose you factor in some of the uncontrollables. We’ve had a bit of weather and all that.”
Unlike their visit in 2015, or last year’s final in the UAE, a loss at the SCG wouldn’t be terminal to New Zealand’s hopes of adding to the 2000 ICC Knockout and 2021 Test Championship as their two pieces of global silverware. But ending the hoodoo would be the perfect start.
Tags: Australia, Australia vs New Zealand, ICC Men's T20 World Cup, Kane Williamson, New Zealand