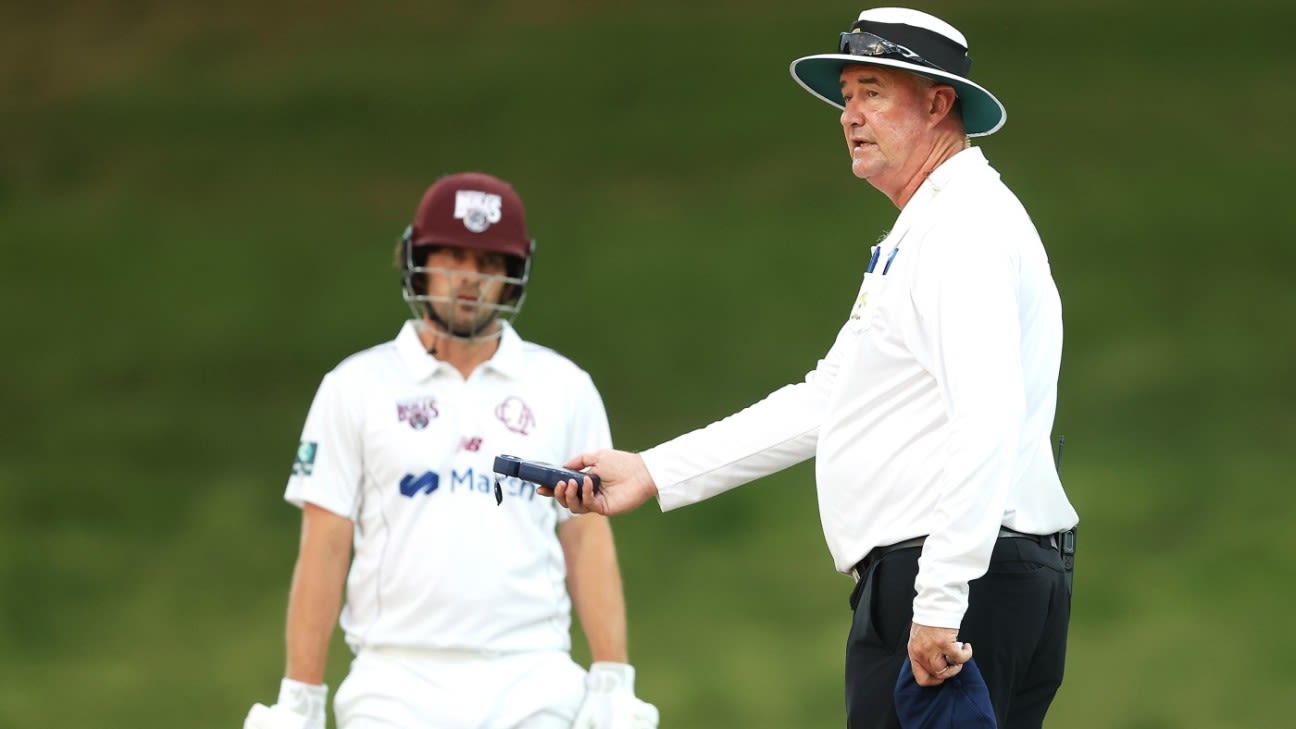 New South Wales 246 (Gilkes 72, Abbott 62) and 256 (Henriques 99*, Swepson 5-113) drew with Queensland 6 for 477 dec (Renshaw 200*, Neser 136) and 0 for 10
Umpire Greg Davidson determine the light was not good enough•Getty Images
It was so close and yet so far for Queensland in a drama-charged final session when bad light robbed them of Sheffield Shield victory against NSW with three overs remaining.
Queensland’s openers needed 26 runs to win from the final five overs at Sydney’s Drummoyne Oval in what seemed like a formality. Joe Burns and Matt Renshaw polished off 10 of them in two overs before the umpires took the players off due to the light reading at 6.34pm AEDT.
Bulls captain Usman Khawaja came onto the field to ask the umpires why they could not continue as the Blues players swiftly made their way to their dressing room delighted to have secured a draw.
The bails were flicked off the stumps by umpires Greg Davidson and Simon Lightbody minutes later to bring an end to an extraordinary day’s play.
Related
When legspinner Mitchell Swepson removed Nathan Lyon to dismiss the Blues for 256, victory had seemed assured.
Queensland allrounder Michael Neser summed up the mood in the camp.
“It is not the result we wanted. We fought so hard throughout the game,” he said. “We were so close to that win. If we could have [bowled NSW out] a couple of overs sooner it might have been a different result.”
NSW batter Moises Henriques was left stranded on 99 after featuring in two match-saving stands.
“We were just doing our best to stay out there for as long as we could,” Henriques said of his resistance.
Henriques and Matthew Gilkes (48) batted through most of the first two sessions, which included a break for rain, in a 112-run stand. With Henriques at the crease NSW went to tea on 5 for 211 before the game took a roller coaster turn.
Pacemen Neser and Mark Steketee then captured 3 for 2 in the space of 12 deliveries with Joe Burns taking two diving catches at slip and wicketkeeper Jimmy Peirson snaring one of his own to remove Sean Abbott, Baxter Holt and Ben Dwarshius.
Chris Tremain (5 off 68 balls) combined with Henriques to hold up Queensland for 27 overs in a 39-run ninth-wicket stand that was ultimately decisive.
Tags: Michael Neser, Moises Henriques, New South Wales, NSW vs Queensland, Queensland, Sheffield Shield