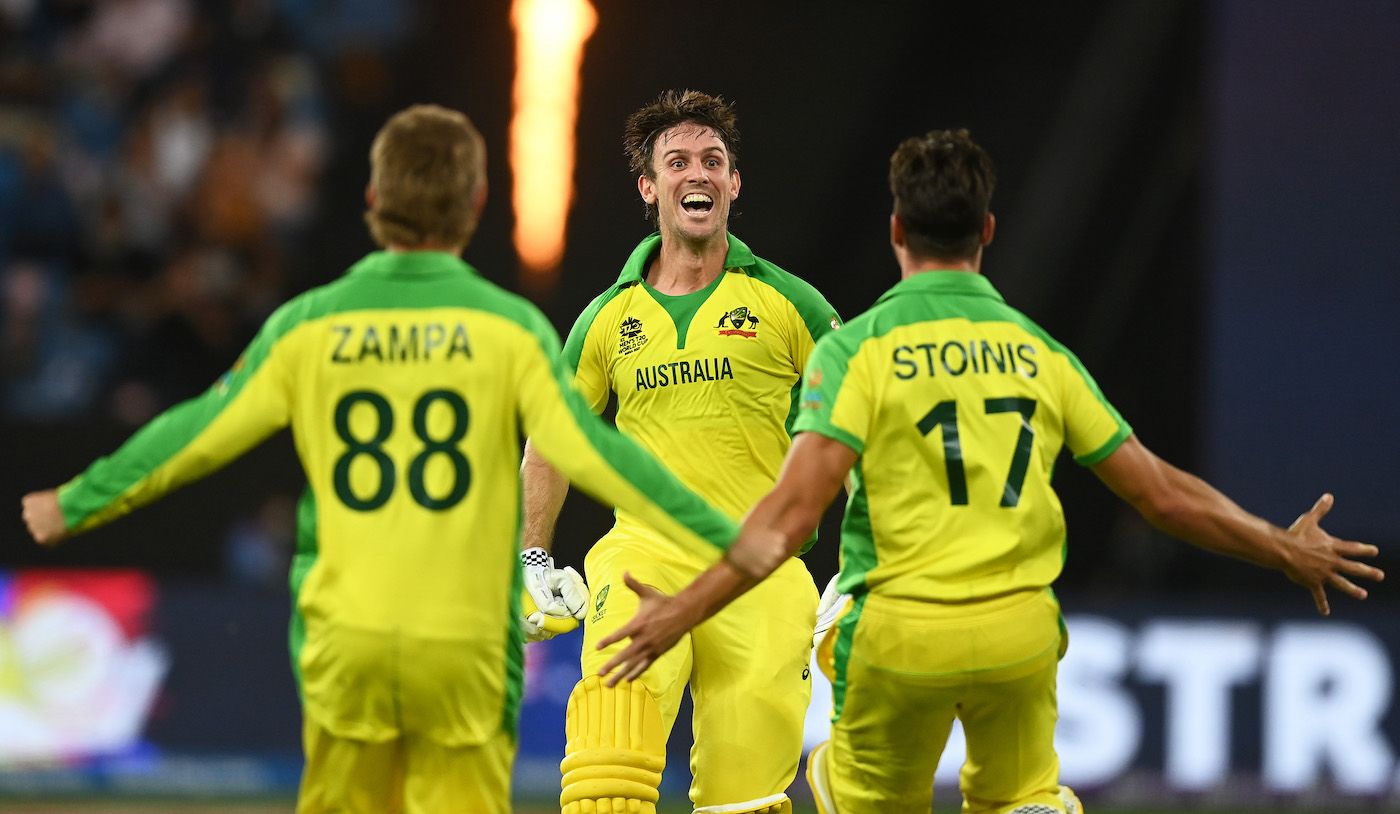 Day by day, match by match, we are getting closer to the real thing. Neither Australia nor England have been short on T20Is of late and now they face each other for three more, beginning in Perth before two more back across the country in Canberra.
The sides have been doing a fair amount of tinkering with their teams in recent games, but it has been as much to do with workload management as anything. Barring late-injury dramas, it still feels they are close to knowing their World Cup XIs – England perhaps have two spots up for most debate and for Australia, provided Mitchell Marsh and Marcus Stoinis can bowl, it still appears just the final batting place to resolve.
While there is nothing hugely significant riding on this series – the main thing will be certain players finding form and others avoiding injury – it has the makings of a very good contest. Australia found their groove in the second outing against West Indies while England played some excellent cricket in Pakistan to take the series 4-3 with wins in the last two games.
Related
The short nature of this trip to Perth, which is not an ideal schedule for the home side, and was not the original fixture until this game was moved west after the venue lost its ODI against South Africa, means Australia will field a fresh frontline attack from Friday in Brisbane with only Cameron Green of the five bowlers used with the squad.
For Green, provided he is in the XI, this will be his first international on his home ground with Perth having not staged international cricket since the start of the Covid-19 pandemic. If Marsh, Stoinis and Ashton Agar play, Western Australia will be well represented. Josh Inglis is also in the squad along with former WA player Tim David.
Depending how England manage their fast bowlers, there is the enticing prospect of seeing Mark Wood operate on a Perth pitch after he sent down some thunderbolts in Pakistan.

Ben Stokes is now a two-format player having retired from ODIs earlier this year, but he hasn’t played a T20I since March 2021 against India. Rightly or wrongly, his career in the format is still most-remembered for being taken for four sixes by Carlos Brathwaite in the final over of the 2016 T20 World Cup final. He has never quite found his perfect role in the England side, with a top score of 47 not out in 28 innings and 19 wickets with an economy of 8.77. There is a squeeze of highly-destructive hitters in England’s middle order, so it’s a rare occasion of the pressure being on Stokes to prove he should be among them.
This is a big week for Marcus Stoinis. He has struggled to stay on the park in recent months and his side injuries are frequent enough to be something of a concern. But he had a significant part to play in Australia’s World Cup triumph last season and he is important in balancing the side, although his bowling is not of Green’s quality. He has every right to be in the World Cup XI, but he’ll want to make this series count.

Mitchell Starc, Pat Cummins, Josh Hazlewood, Adam Zampa and Glenn Maxwell have all stayed on the east coast and will rejoin the squad in Canberra, so there will be four new bowling options. It would make sense to give Kane Richardson and Agar a game after their recent side issues as they are in the World Cup squad, but it could also be another opportunity for Nathan Ellis to impress. Steven Smith is likely to be forced out of the XI as Australia may continue to tinker with their batting order.
Australia (probable) 1 David Warner, 2 Cameron Green, 3 Mitchell Marsh, 4 Aaron Finch (capt), 5 Marcus Stoinis, 6 Tim David, 7 Matthew Wade (wk), 8 Daniel Sams, 9 Ashton Agar, 10 Nathan Ellis, 11 Kane Richardson
Liam Livingstone is not available for selection as he continues to recover from an ankle injury while Chris Jordan may be held back for the Canberra games. Captain Jos Buttler will return at the top of the order, which leaves the major selection call between Alex Hales and Phil Salt to partner him
England (probable) 1 Jos Buttler (capt & wk), 2 Alex Hales/Phil Salt, 3 Dawid Malan, 4 Ben Stokes, 5 Harry Brook, 6 Moeen Ali, 7 Sam Curran, 8 Chris Woakes, 9 Adil Rashid, 10 Mark Wood, 11 Reece Topley

There hasn’t been much cricket at this ground over the last couple of years – just a handful of BBL and WBBL matches – but it’s normally a good pitch that offers pace for bowlers and batters to work with, although it is still early in the season. The forecast is, by Perth standards, on the milder side with just a very slim chance of a shower.

“Adapting to conditions quickly is going to be a key factor for us to get up and running. It’s all about peaking at the right time for this World Cup.”
Jos Buttler on the World Cup lead-in
“Don’t leave any energy in the tank. Give it our best shot. We are here on home soil. We want to entertain and we want to take it deep. We have to start well against New Zealand.”
David Warner on Australia’s challenge ahead
Tags: Australia, Australia vs England, Ben Stokes, England, England in Australia, Kane Richardson, Marcus Stoinis, Mitchell Marsh