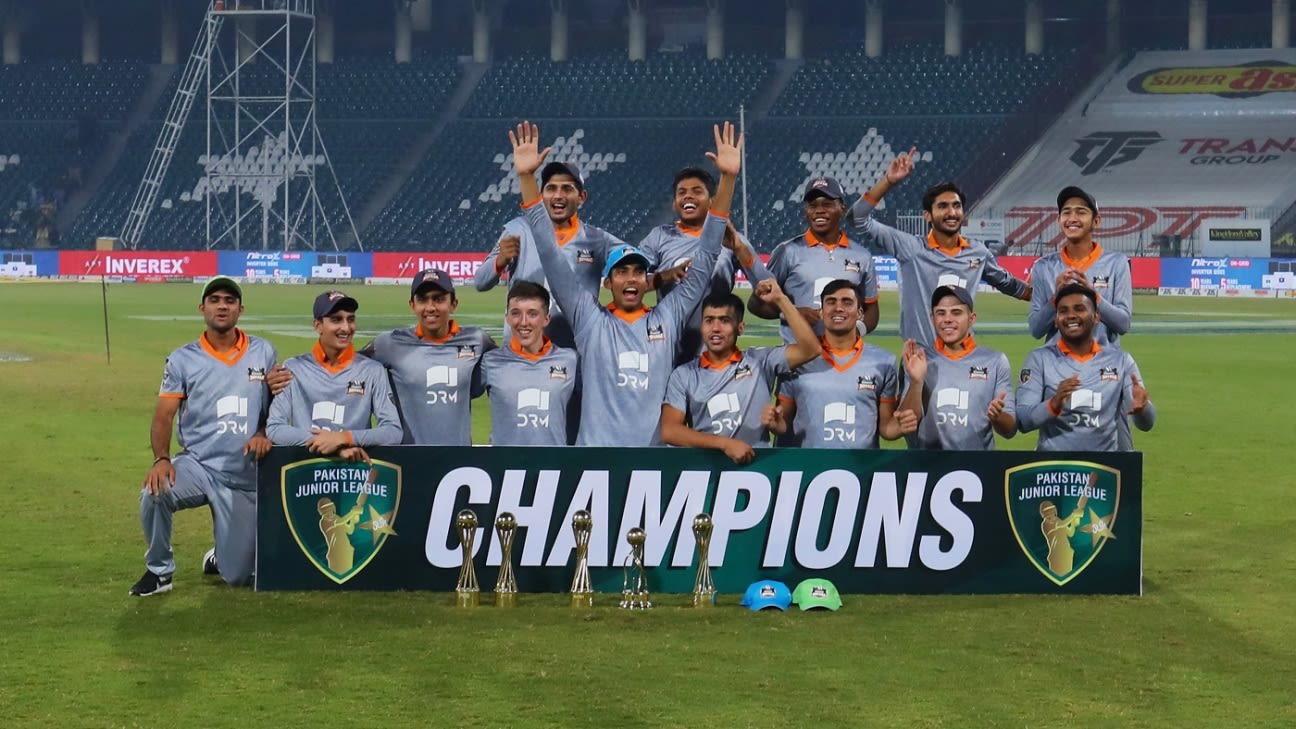 Bahawalpur Royals 225 for 3 (Irfan 79, Arif 56, Kharote 47*, Qamar 2-34) beat Gwadar Sharks 139 (Hussain 67, Zeeshan 3-27, Kharote 3-32, Sajjad 2-15) by 86 runs
Bahawalpur Royals carved their name on the inaugural Pakistan Junior League (PJL) trophy by beating Gwadar Sharks by 86 runs in the final, in Lahore on Friday. Shawaiz Irfan smashed 79 off just 32 deliveries and Tayyab Arif hit a quick fifty to set the platform for an imposing total of 225. In the chase, Sharks were bowled out for 139, thanks to Mohammad Zeeshan and Nangeyalia Kharote’ three wicket-hauls.
Sharks won the toss and elected to bowl, but the decision backfired. The damage inflicted by Irfan, Arif, Basit Ali and Kharote was massive for Sharks. While Arif made a 34-ball 56, Kharote remained unbeaten on 47 off 30 balls to help the Imran Tahir-mentored side post the highest total of the season.
The Lahore-born Shawaiz, who was promoted up the batting order, was crowned Player of the Match after he thumped the fastest half-century of the tournament. His innings had seven fours and six sixes. His glovework has also been impressive throughout the PJL, drawing praise from Rashid Latif as well.
Sharks never got a sniff while bowling as Arif and Afghanistani southpaw Kharote teed off and added 87 runs for the third wicket. Arif scored his first fifty of the PJL and his innings was laced with seven fours and one six, while Kharote hammered two sixes and three fours in his unbeaten knock.
Sharks finished the group stage at the top of the table and beat Royals in the Qualifier 1 but on Friday, they were outclassed in all departments. Royals brought their A game in the all-important final and went in with an attacking mindset right from the start.
In reply, Sharks did manage a flying start in the powerplay and got to 103 for 4 in the first ten overs, but the innings nosedived after the dismissal of their captain Shamyl Hussain, who notched up 67 off 34 balls. In the end, the team was skittled for 139 in under 16 overs.
Their innings was a story of two halves as Sharks were meeting the asking rate in the first ten overs with Hussain leading the charge. But the moment Zeeshan was introduced into the attack, he removed Hussain and the floodgates were opened. Thereon, the wickets fell at regular intervals as the spinners applied the choke and the equation became tougher with each passing over.
Sharks’ overseas signing Luc Martin Benkenstein has been in good nick in this competition and even guided his side to the doorstep of victory with a well-crafted 71 in Qualifier 1, but he couldn’t get going in the final and holed out to long-on off Sajjad Ali’s bowling. Another lynchpin of Sharks’ batting line-up Mohammad Zulfikal was snared by Kharote early on. Eventually, Sharks lost their last seven wickets for 43 runs.
Sharks will rue the missed opportunities, overthrows and losing their composure when Arif and Shawaiz went berserk with the bat.
Basit Ali, who hails from a remote city of Pakistan – Dera Murad Jamali – finished the tournament as the leading run-scorer with 379 runs at a strike rate of 150.39. He struck one century and two half-centuries in the PJL and a crucial 35 in the final. Zeeshan ended the tournament as highest wicket-taker with 14 scalps at an economy of 7.25 from eight matches.
Tags: Basit Ali, Mohammad Zeeshan, Nangeyalia Kharote, Pakistan Junior League, Royals vs Sharks, Shawaiz Irfan, Tayyab Arif