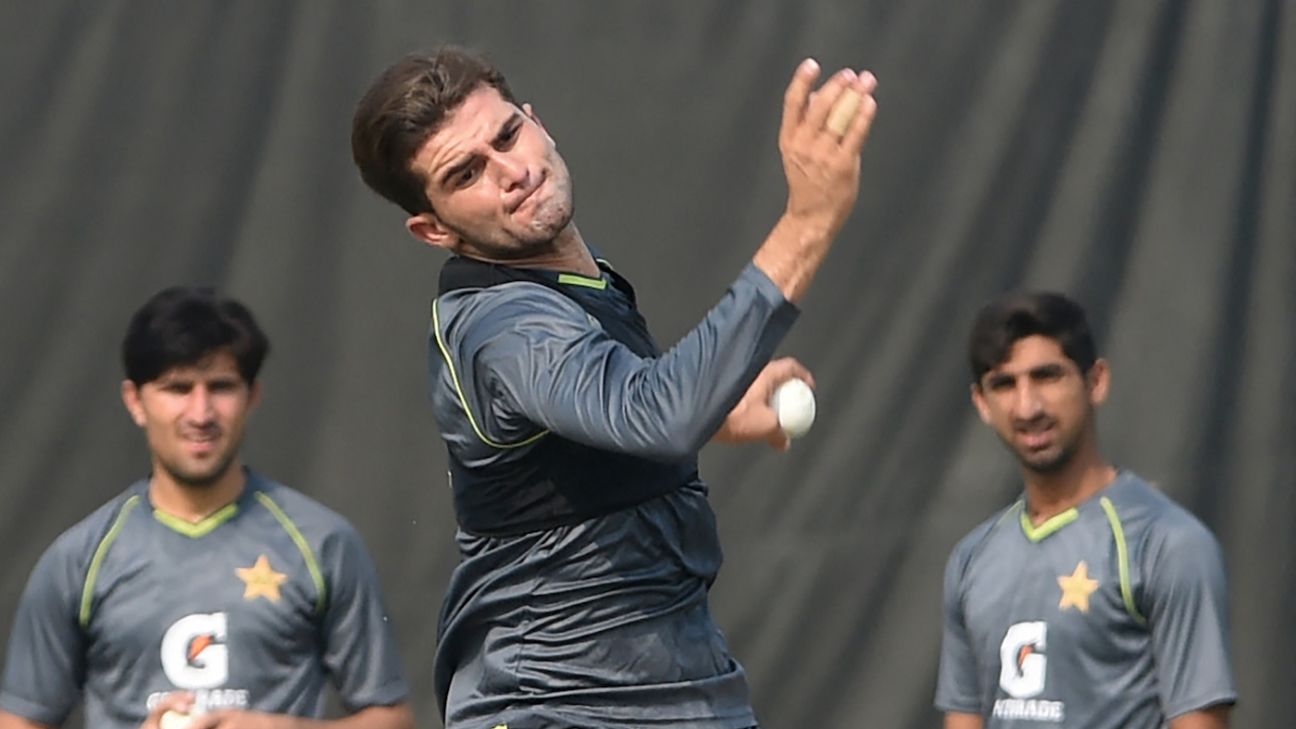 Shaheen Shah Afridi has completed his rehabilitation, in London, after a knee injury, and is ready to join the Pakistan squad in Brisbane on October 15 ahead of the men’s T20 World Cup, as scheduled.
Related
A PCB statement on Tuesday said that Afridi will be available for selection for Pakistan’s T20 World Cup warm-up matches on October 17 [vs England] and October 19 [vs Afghanistan]. His match fitness will be assessed after that ahead of their opening World Cup match against India, on October 23 in Melbourne.
“I am super excited at the prospect of rejoining the national side for the T20 World Cup and playing my part in the campaign,” Afridi said in the statement. “It has been a difficult period for me to be away from the game and the team I love the most, and not be part of some gruelling and exciting matches.
“I have been bowling six to eight overs trouble-free for the past 10 days with full run-up and pace. While I have enjoyed bowling and batting in the nets, nothing can replace the feel of match environment and I can’t wait to be in that setting. “It has been a rigorous and challenging rehabilitation programme, but I have thoroughly enjoyed it. To be honest, I am feeling fitter than ever before and can’t wait to wear the playing kit.”
Afridi has been out of action since a right knee ligament injury while fielding during the first Test against Sri Lanka in Galle in July. He subsequently travelled with the team to the Netherlands for a three-match ODI series in August, in the hope that that he would recover while on tour rehab. That didn’t pan out as expected, as swelling on his knee started got worse in the Netherlands and the PCB announced then that he would be out for four-to-six weeks.
But he was kept with the squad as they travelled to the UAE for the Asia Cup as another attempt was made to get his rehab going. But medical scans and reports confirmed a posterior cruciate ligament injury and it was eventually decided that he would travel to the UK for further rehab and work with doctors on the PCB medical panel, Zafar Iqbal and Imtiaz Ahmed.
Fakhar Zaman will continue his rehabilitation, following which a decision on his participation, or not, at the T20 World Cup would be made•AFP/Getty Images
Fakhar Zaman, who was left out of Pakistan’s team for the World Cup, also because of a knee injury, was in London as well, with the same medical panel overseeing his treatment. Fakhar had sustained the injury during the Asia Cup final, when he landed awkwardly on his right knee while fielding, which ruled him out of the home T20I series against England too. He has been added to the list of reserve players – Mohammad Haris and Shahnawaz Dahani are the others – for the World Cup, and is understood to have recovered too.
Fakhar will complete his rehabilitation under the supervision of PCB’s chief medical officer and team doctor Dr Najeebullah Soomro, following which a decision on his participation, or not, at the T20 World Cup would be made.
Changes can be made to the squads without requiring permission from the event’s technical committee till October 15 for the direct qualifiers. Changes can be made after that too, but with permission.
After losing the seven-match T20I series 4-3 to England at home, Pakistan have travelled to New Zealand to play a triangular T20I series, with Bangladesh as the third team.
Tags: Fakhar Zaman, ICC Men's T20 World Cup, Pakistan, Shaheen Shah Afridi