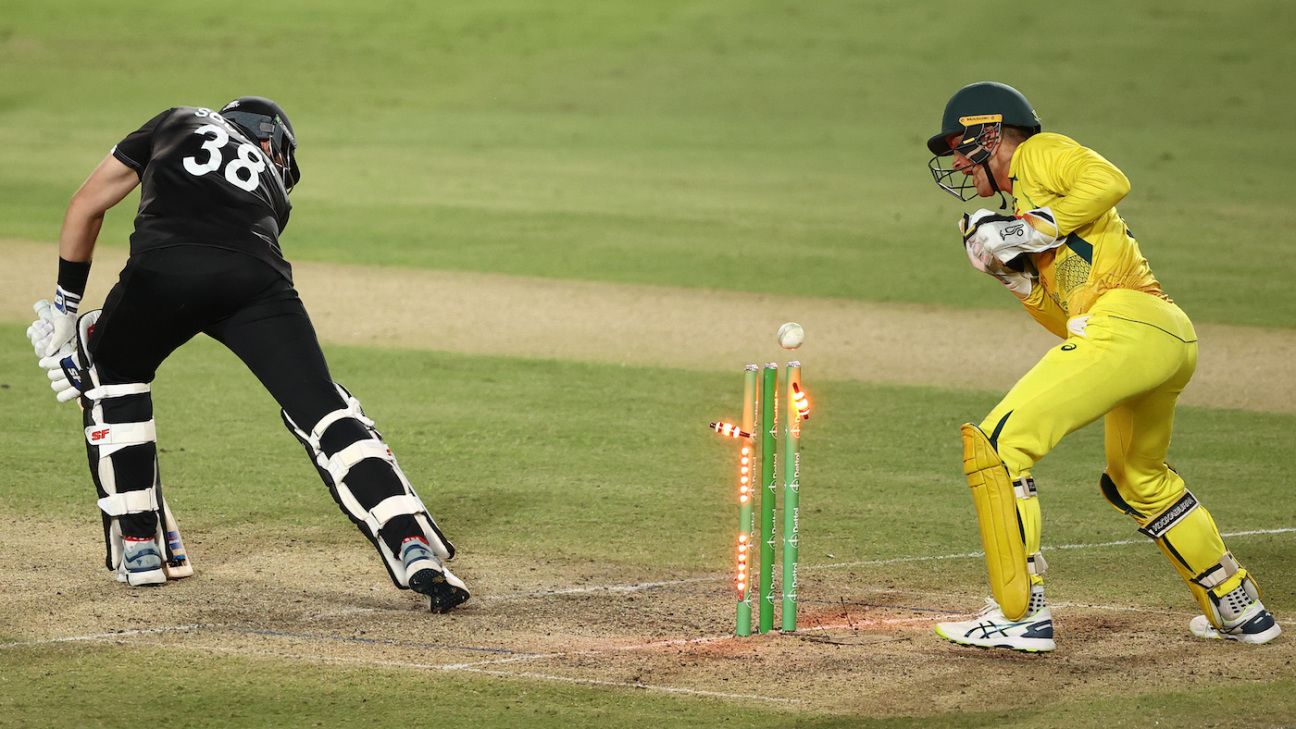 Less than one year after New Zealand were blown away by Australia in the 2021 T20 World Cup final in Dubai , the two teams come together once again, this time to launch the main draw of the 2022 T20 World Cup at what will be a packed SCG. However, with the La Niña weather event in play there is a 90% chance of rain in Sydney, which could potentially play spoilsport.

New Zealand’s warm-up fixture against India was also washed out though it was in Brisbane earlier this week. They will also have to contend with the injury-enforced absence of Daryl Mitchell – one of their heroes from the 2021 T20 World Cup – who is racing against time to be fit for the game against Afghanistan on October 26 at the MCG.
Fast bowlers Lockie Ferguson and Adam Milne are also working their way back from injuries and were hence managed carefully in the most recent T20I tri-series at home in Christchurch. Then, there’s New Zealand’s record against Australia in Australia, which hangs like Coleridge’s albatross around their necks. Zero wins in any format since 2011.
Related
In their quest to remedy that and maximise the powerplay, in particular, New Zealand have made the tough call of relegating Martin Guptill to the bench and bumping Finn Allen up to the top along with Devon Conway. Allen is one of the most exciting short-format players currently, boasting a powerplay strike rate of 156.48 – the best among all batters who have played at least ten innings during this phase since his T20I debut in March 2021.
1:31

Williamson: Both Ferguson and Milne bring something different

The selection headaches don’t end there. New Zealand will have to choose between Mitchell Santner, Ish Sodhi and Michael Bracewell, the Wellington Firebirds batting allrounder who has shown that he can do the job as a bowling allrounder too. It is very unlikely that all three can find a place in the same XI.
Australia have also had their fair share of issues in the build-up to the World Cup, but their appear in much healthier shape, despite losing spare wicketkeeper-batter Josh Inglis to a golf injury. Matthew Wade, Josh Hazlewood and Adam Zampa have all excelled in T20 cricket over the past 12 months. Throw in the finishing skills of Tim David and the pedigree of David Warner at the top, and you have the ingredients of another title-winning side.
If it comes down to a truncated shootout on Saturday, Australia arguably have more depth and explosive power than New Zealand. However, one can never count New Zealand out at a global tournament.

The boundaries in Australia are bigger than the those in many other parts of the word. But they still might not be big enough for Tim David who has a bit of Kieron Pollard about his six-hitting. In addition to muscling the ball over midwicket, David is particularly good at hitting in the ‘V’ like his Mumbai Indians senior. His duel with Ferguson/Milne could set the pulses racing.

John Cena’s Glenn Phillips‘ time is now. He only had a peripheral role to play in the last T20 World Cup but with Mitchell injured, he will be one of those asked to pick up the slack. Phillips is quite capable, his 360 degree game attracting the attention of T20 franchise owners all around the world. He is also a live wire on the field, can keep wicket and bowl some fastish offspin, if required.
Everyone’s coming for the trophy in Australia’s hands•Getty Images

The pitch was under cover for most of Friday so Finch only got a brief look at it. He said it was on the drier side. Though the forecast is grim, the SCG recovers quickly from rain, which the Australian Bureau of Meteorology, says is likely to come in the afternoon and the evening.

“We haven’t thought too much about that. Nice to play against Australia first up, and it should be a good game.” Kane Williamson is not reading too much into New Zealand’s Australia hoodoo